Toyota is hush on specs, but the car is plenty of fun behind the wheel

MADRID — We've never known less about a new car before actually driving it. The first time I even laid eyes on the new Toyota Supra was in the pit lane at Jarama Circuit, outside of Madrid, Spain. A still-camouflaged prototype slid up next to me and I popped into the driver's seat. Moments later, I was skittering around the track's 13 tricky corners, the first driver of the afternoon.

From there, the impressions came quickly.

A new Supra is a pretty big deal. While the mystique of the car — largely centered on the fourth-generation A80 with the big wing and fearsome twin-turbo inline-six engine — has lived on in popular culture, the last Supra disappeared in 2002. That's a long gap, indeed.

The good news is we can report how the A90 drives and handles. The somewhat disappointing asterisk to that is we were given no specifications whatsoever. Particulars such as weight, 0-60 times and even horsepower were withheld. Nope, not happening, says Toyota.

How's that for a blind date? Or, perhaps, a speed date, as we got a total of eight laps and less than an hour on regular roads.

Engineers insist they aren't being coy. "The car is still being finalized," said the project's assistant engineer, Masayuki Kai. "The truth is we don't know the final numbers ourselves." Kai has been based in Munich for the past five years, working alongside Toyota's technical partner, BMW. The Supra coupe and latest BMW Z4 roadster were designed in tandem, with Bimmer engineers doing the lion's share of the work. The Supra's powertrain hardware comes from BMW, and Toyota is responsible for its own calibration and tuning. 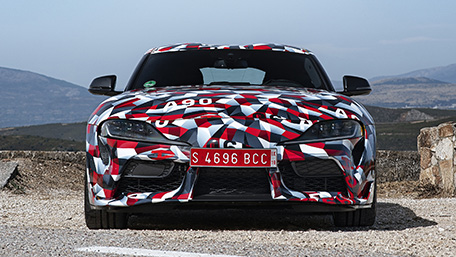 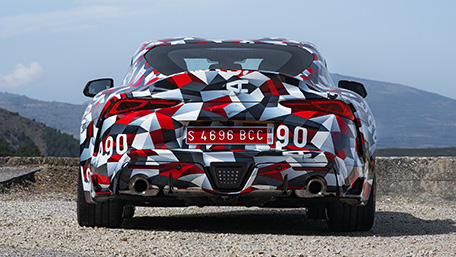 Toyota is still working on stability controls, electric steering and pedal feel. They were quite curious about our driving impressions, and almost as intrigued by comments from a colleague who had also driven a prototype Z4. Apparently, the partnership hasn't gone so far as to drive each other's cars.

So for now, guesses about the Supra's specifications will have to suffice. Engineers won't even officially confirm that the 3.0-liter inline-six engine is a version of the twin-scroll, single-turbo B58 found in the new Z4. (It is, though.) Like the Z4, the Supra also gets the eight-speed ZF transmission and BMW's electronic M differential.

Guided strictly by impressions from our ass-o-meter, we'd say the car has around 365 horsepower and 369 pound-feet of torque. Sixty comes in perhaps 4.5 seconds. Acceleration is brisk but not savage. The cars we drove were fitted with European-mandated particulate filters, which rob some power. Output will be higher in the States. As for curb weight, Toyota says the Supra weighs less than 3,300 pounds.

There is something tantalizing and unusual about a totally blank slate. I had no expectations about the Supra until I was actually inside. Once there, I found that the interior was also covered up by fabric, but a glance under the curtains proved that buttons and controls are from BMW. (The car will be produced in a BMW factory.) 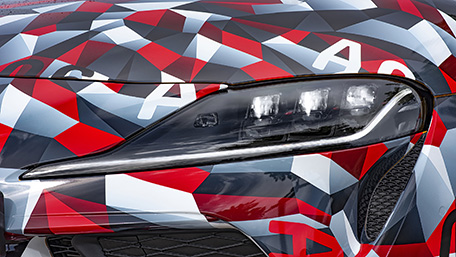 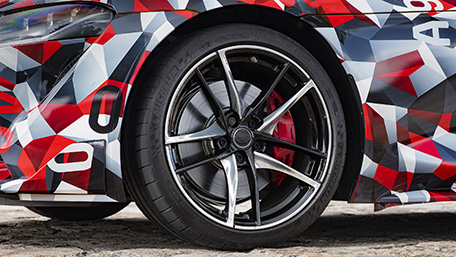 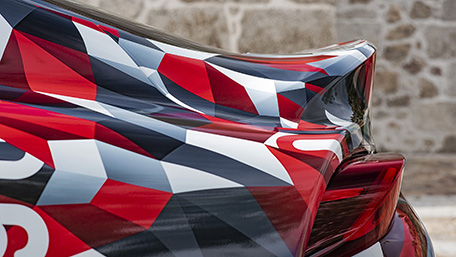 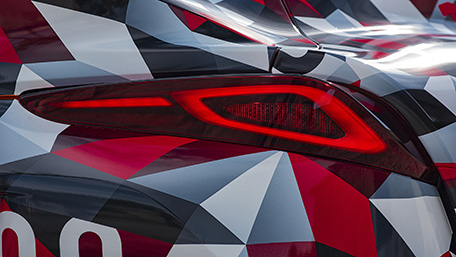 Crawling out of pit lane, I left the car in Street mode and automatic as I took a sight lap. Jarama is a former F1 circuit, and it has both plenty of elevation and blind turns. The Supra's rather placid nature around the track left me disconcerted. Not much noise, little tension, easy shifts. I had a driving instructor/car minder in the passenger seat, and she reached under the felt covering, keyed Sport mode and things changed entirely.

The Supra has adaptive damping, and rarely have we experienced a more significant shift between Normal and Sport. The step in terms of engine noise, gearing and the steering weight is significant. (We uncovered no Sport-Plus mode, but it does seems that you can turn everything off.)

A few other snippets: The Supra has a 50/50 weight distribution, a center of gravity lower than that of the Toyota GT-86 and body rigidity greater than that of the Lexus LFA. The engineers were very pleased by its short wheelbase and wide track. (Again, no dimensions were given, but the new Z4 has a wheelbase of 97.2 inches, length of 170.1 inches and width of 73.3 inches.)

And then we were concentrating on banging around Jarama. The Toyota's nose takes to direction changes happily, even with an abrupt turn-in, and the car firmly resists understeer even when you pick up the throttle. But the A90 likes a certain driving style. Drag the brakes too long and the transitions through corners become staccato. Go neutral through an apex and the car is light and skittish. 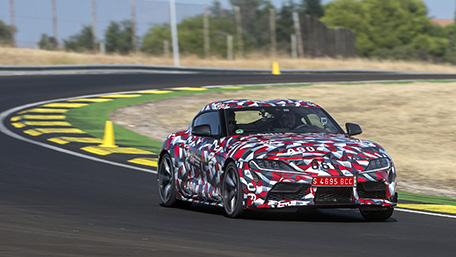 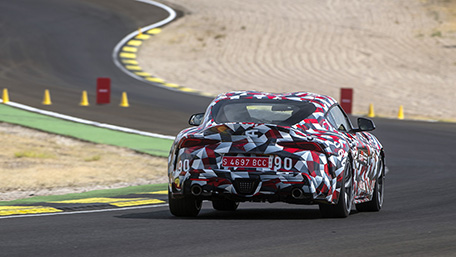 Rather, the Supra likes to be braked early, and then comes alive under a stabilizing throttle. A firm push on the gas through the apex settles the car down and moves you through corners firmly and quickly. The 19-inch Michelin Pilot Super Sports have great grip, and we never managed to induce any slip angle.

One wishes the car pivoted more from its hips, but its width and front-engine, rear-wheel-drive configuration work against it. You can find a rhythm in ess turns, but the Supra doesn't give the effortless cadence of a Porsche Cayman, surely one of the benchmark competitors.

Torque is bountiful. It can take a third-gear corner in second or fourth and not suffer great consequence in overall speed. The steering is able, but not as sharp or quick as we'd prefer, and feedback is muted. More work is needed here. So, too, goes the brake pedal, which is long and not nearly firm enough.

Toyota says its intention was not to make a track car, so the wriggling roads back to Madrid were perhaps more indicative of its true nature. To its credit, the company didn't send on us a middling route, but rather a challenging set of roads used in tarmac rallies. With varying levels of grip, few guardrails and serious consequences for an off, the roads made for a highly entertaining ride. 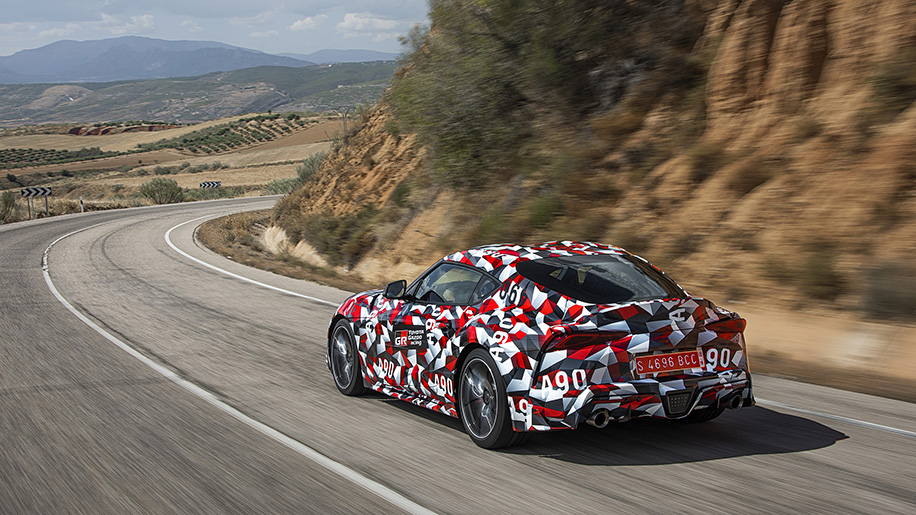 In the real world, the ample but not overwhelming torque is much appreciated, and the Supra feels particularly well suited to a quick but not searing pace. With that maintenance throttle dialed in, the grip allows you to sling along curves. And yet the ride is pliant and totally without punishment. It's the antithesis of, say, a Jaguar F-Type.

That also includes the sound. Or, sadly, the lack of overt sound. It is almost hybrid quiet. The engineer Kai's eyes lit up when he mentioned that the U.S.-spec cars will be "louder... much louder."

The cars were still in their speckled camouflage, but the overall silhouette is potent. We particularly liked it from the rear, where you can see the rounded roof, sucked-in sides and thick hips. It shares the Z4's rather jutting nose, which may not be such a good thing.

Do we think we totally got to know the new Supra? No. Like any good first date, we had a good back-and-forth repartee between machine and driver, a few lingering questions and the desire to meet up again. When all the camouflage comes off, the specifications are unveiled and the calibrations are finished, we have a feeling the Supra will be an entertaining partner indeed. 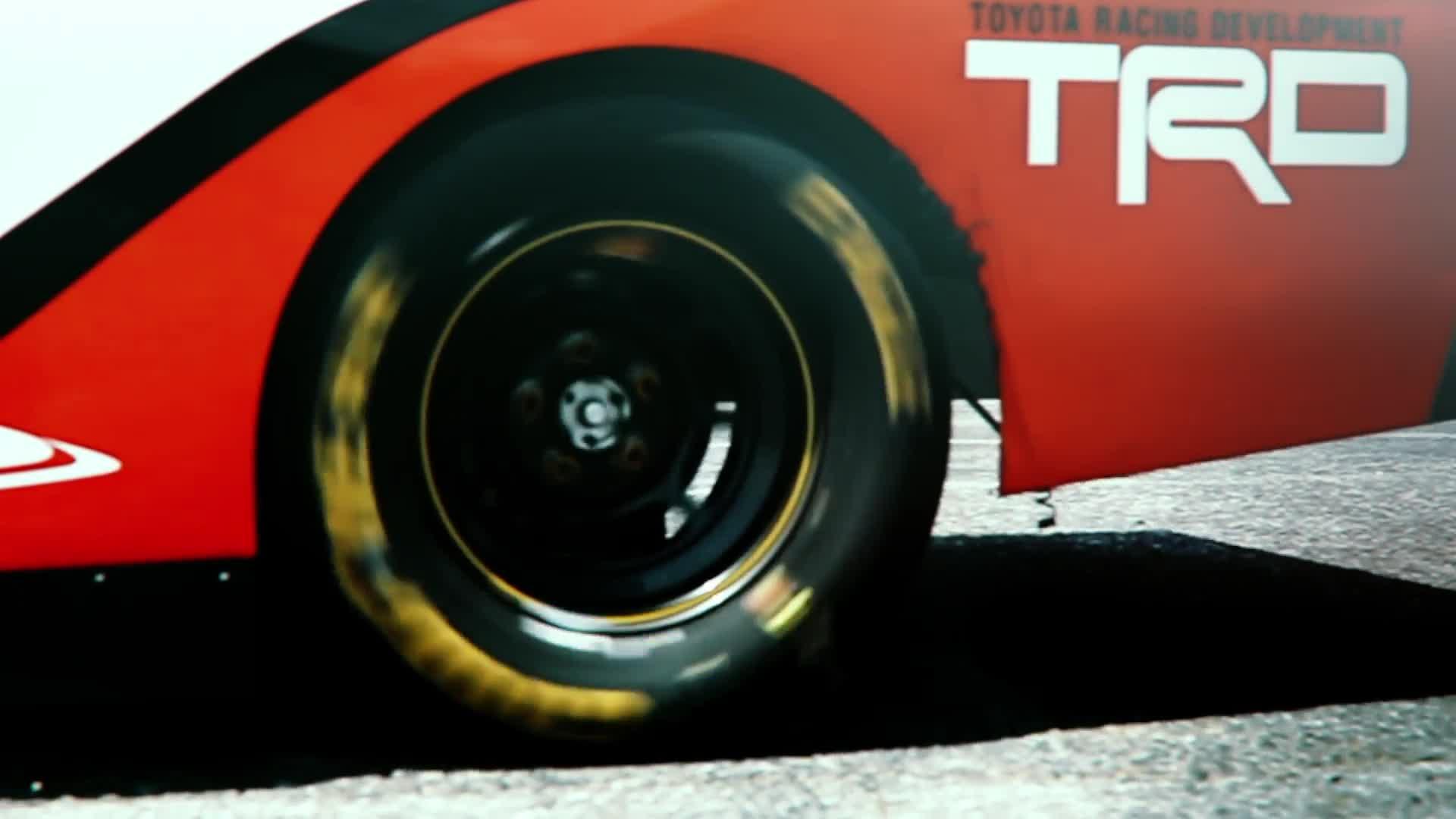