It may not be air-cooled, it may not have a four-speed manual transmission. Heck, it may not run on gasoline at all. But there's no denying that the Volkswagen I.D. Buzz concept has rekindled interest in the minivan that started it all, way back in 1950 when VW chief Heinz Nordhoff approved a production version of the Type 2 that had been proposed by Dutch importer Ben Pon. Those humble beginnings bore fruit that ripened into a cultural icon with popularity that refuses to diminish.

So intrinsic is the draw of the Bus that Volkswagen has seen fit to tease an eager public with several concepts hinting that a remake of the van could be in the cards. But it wasn't until the I.D. Buzz Concept drew accolades at the 2017 Detroit Auto Show that VW officially decided it's finally time to bring back the bus. A production version of the venerable van is expected to debut in 2022 as an all-electric people mover.

Part of what makes VW's Type 2 resonate so much with so many people is its adaptability. The original bus and pickup morphed into everything from a deluxe model with sky lights and roll-back canvas roofs to camper conversions with space for four. Later in life, four-wheel-drive Syncro turned '80s and '90s Vanagon models into legitimate adventure vehicles. 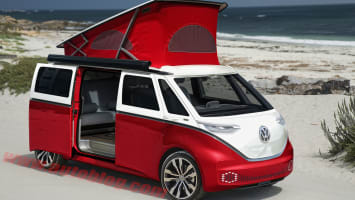 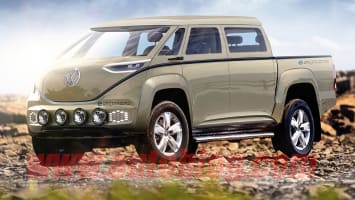 All of this made us wonder what possibilities might exist for VW to expand on the I.D. Buzz range. The MEB platform that the reborn bus will be built upon is being designed with modularity in mind. A flat floor above the batteries – VW describes their shape like a bar of chocolate – means interior options abound, the wheelbase can be relatively easily adjusted and all-wheel-drive variants are possible.

We think Volkswagen should seriously consider the impact that multiple VW I.D. Buzz variants would provide. A Camper, a Deluxe, and a Syncro Doka pickup truck seem like a perfect trio from which to launch the van. We love the idea so much, in fact, that we commissioned the renderings you see up above. And we couldn't help but throw a Mystery Machine into the mix, if for no other reason than we think it's cool.

Which of these VW I.D. Buzz renderings would you be most interested in seeing in production?