Genesis, Hyundai's semi-independent luxury car brand, finally revealed the long-awaited G70 compact sedan. This is the Korean automaker's new entry-level model and likely to be the brand's biggest seller, at least until a crossover makes an appearance. The G70 enters one of the mostly hotly contested segments around. Competitors like the BMW 3 Series and Mercedes-Benz C-Class have been perfecting their craft for decades. This is arguably Genesis' toughest task yet.

The original Genesis — now known as the G80 — made its first appearance nearly a decade ago. Genesis has slowly been building momentum ever since. That 5-Series competitor was followed by the Equus, Hyundai's answer to full-size sedans like the 7 Series and S-Class. Like all Hyundais, these Genesis models pack in a ton of features at a lower price point. The cars have been well received, even if some of the smaller details aren't quite there.

Pricing hasn't been announced, but expect the G70 to follow the same basic formula as its larger siblings. As expected, the G70 simply looks like a smaller variant of the G80 or G90. That's generally a good thing, as both of those current models wear a far more handsome and bold design than their fine but bland-looking predecessors. The car's design was lead by Luc Donckerwolke, the former lead designer of Bentley, Lamborghini and Audi.

There was a big focus on proper proportions, with a long hood and short overhangs. There are a number of small chrome accents that brighten the car without looking tacky. New LED lighting up front should soon make its way to other Genesis products. The taillights are an stretched evolution of the lamps on the G80. 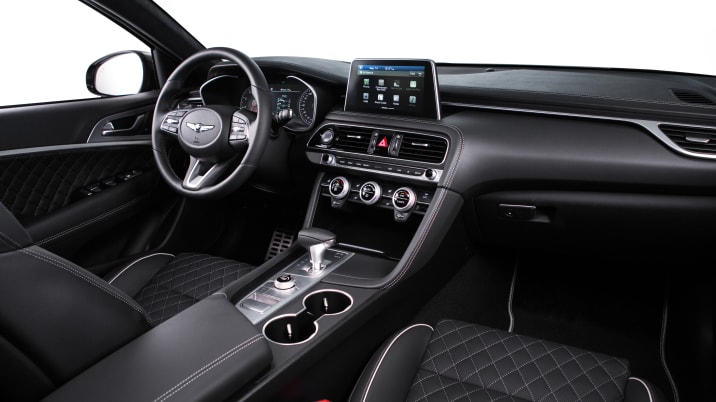 The interior is reminiscent of other Hyundai and Genesis products. That's generally a good thing, as the overall design is simple but well organized. There seems to be the right mix of buttons and knobs. The instrument cluster features two analog dials flanking a digital display. The infotainment screen sticks up and above the dash and appears to be running the same software as current models. The seats are covered with the now common contrasting quilted stitching. We'll have to wait for a full drive to see how it all feels from behind the wheel.

The G70 packs in features like launch control, a multi-link rear suspension, torque vectoring and a mechanical limited-slip differential. Genesis isn't playing around when it comes to building a solid sport sedan. If it's anything like the G80 Sport, it's sure to be a rocket, at least in a straight line. For those who still care, Hyundai says the car has been performance tested at the Nürburgring.

Like the G80 and G90, the new G70 packs a whole host of active and passive safety features. In the event of a pedestrian collision, the hood is raised to help absorb some of the impact. The automatic emergency braking has been tuned to detect both cyclists and pedestrians. Other features include highway-driving assist, forward-collision assist, blind-spot monitoring and a driver-awareness warning.

The G70 comes with both Apple CarPlay and Android Auto, two features that are lacking in cars far more expensive. There's an available 15-speaker surround sound system and, in Korea, a server-based voice recognition technology.

The G70 goes on sale in Korea on Sept. 20, though it won't hit other markets until early next year.