Full disclosure: I'm not a Camaro guy. Never have been, probably never will be. So it was probably fitting that with five 2017 Chevrolet Camaro 1LEs on hand, I ended up in the sixth car: a BMW M4. It wasn't planned, I didn't seek out the provided competitor vehicle, that's just how the chips – or rather the keys – fell in Nevada at the Spring Mountain Motor Resort.

And it must be said, the M4 is sensational. A different and perhaps less-involved sensational than its predecessor, but sensational nevertheless. The mid-range surge of torque that greets you when that oh-so-BMW shifter is slotted into fourth. The absolutely just-right pedal placement. The balanced, nimble way it flicks itself through the mid-course slalom. You get the idea.

But, the fact that the Chevrolet folks provided a $72,645 M4 to compare to its $44,400 Camaro SS 1LE can mean one of only two things. One, they've been guzzlin' too much Motor City Kool-Aid. Or two, they know for certain that the high-performance machine they've created really is better on a track.

And what exactly have Chevrolet's engineers and designers created? As on the fifth-generation Camaro, the latest 1LE is an all-around performance-improving package available on the V8-powered SS. By Camaro-enthusiast demand, however, the V6 model now gets its own 1LE package. In both cases, the 1LE includes suspension, brakes, and tires trickled down from a model above – the V6 receives bits from the SS, while the SS receives pieces from the ZL1. They also include extra cooling, a short-throw shifter, a dual-mode exhaust, special faux-suede wheel and shifter trim, and a unique, subtle aero package developed in the wind tunnel especially for the 1LE and finished in the same matte black as the also-unique hood.

And "subtle" is the key word, as the 1LE showcases visual restraint that's not the norm at Chevrolet (see: Corvette Grand Sport). That was actually the point, as the designers felt that stripes and a multitude of badges (it doesn't say 1LE anywhere on the car) aren't in the spirit of the package, which originated in the 1980s on the third-generation Camaro as a homologation special for a showroom-stock racing series. It's always been about go, not show, and the special blacked-out elements (spoiler, splitter, mirrors, wheels, and to a much lesser extent, hood) alone serve as the identifier for those in the know. In that regard, it's a bit like some old M3s.

Settling into the eight-way power Recaro sport seats (standard on the SS, optional on the V6), the differences between the Camaro and M4 are obvious. The quality is, appropriately, about $30,000 worse, and the view out is, um, poor. But then that short-throw shifter is slotted neatly into first, then second, and up into third as that ferocious, virtually unaltered 6.2-liter, 455-horsepower V8 rumbles and roars up the first straightaway at Spring Mountain's east course. The SS includes an automatic-rev-match feature for downshifts, which is appreciated, since the pedal placement falls well short of the BMW's for heel-and-toeing. More concentration (or wider shoes) would be later required when driving the V6-powered 1LE.

The difference in grip between the M4 and the SS 1LE is palpable through turn 1, a sharp 90-degree followed by a broad, stepped right-hand sweeper. Chevrolet says the SS 1LE sticks to the pavement at 1.02 g (the V6 at 0.97) and it sure feels like it. 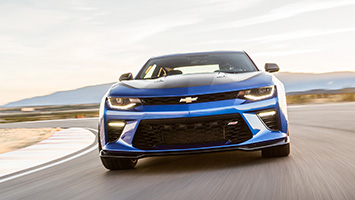 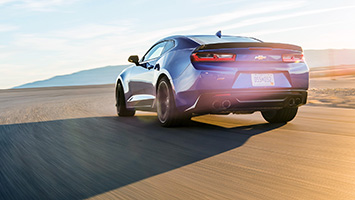 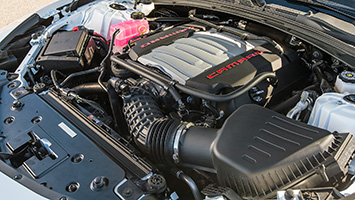 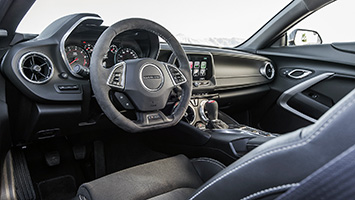 "We can't give Goodyear enough credit," 1LE chief engineer Al Oppenheiser said before the drive. Indeed, the ZL1's Eagle F1 Supercar tires deserve a great big thank-you card, but its FE4 suspension and magnetorheological dampers keep things resolutely planted as well. As another straight leads into a left-right-left-right series of turns followed by a skid-pad-like arc, the composure this muscle coupe maintains really is astonishing as its 3,747 pounds are flung from side to side. There's also an immediacy to the steering's turn-in when in Track mode. Through the same track portion, the M4 just couldn't maintain the same pace (it was shod in 20-inch Michelin Super Sports). It felt like a highly capable road car exerting itself; the Camaro felt right at home.

And yet, the SS 1LE isn't some track-only special. Sure, the roads we circuitously drove from Las Vegas to Spring Mountain's home of Pahrump, Nevada (a town as nice as its name suggests), were beautifully paved. But I also accidentally left the car in Track mode after bombing through some canyon roads and never found the ride objectionable. Once the magnetic suspension was eventually set to the more appropriate Tour mode, things got comparatively plush. I drove a Mercedes C300 recently with a less pleasant ride. Heck, even the Track steering was perfectly fine on the highway – usually sport steering settings are rife with excessive weight and darty tendencies. There's a reason I didn't notice it was still in Track.

Back in the environment where that setting belongs, there are additional 1LE elements that prove their worth. There's the limited-slip differential – electronic in the SS and mechanical with the V6 – that prudently doles out power through corners. The extra cooling for the engine oil, differential, and transmission. The SS gets the six-piston Brembo brakes from the ZL1 (complete with red calipers), while the V6 1LE comes with four-piston Brembos from the stock SS. In each instance, the pedal is easily modulated and its effort strikes a good balance for track and road use. Importantly, they instilled confidence to brake later with each passing lap.

Now, as for that V6 1LE, it performed similarly enough through the quick transitions and broad sweepers despite having the stock SS's non-magnetic FE3 suspension and lesser Goodyear Eagle F1 asymmetrical run-flats. Actually, with less weight over the nose, it feels a bit more nimble doing it – though not quite to the M4's level. And it's important to remember that this is not your grandma's V6 Camaro. It has 335 hp, gets up to 60 mph in 5.2 seconds, and completes the quarter-mile in 13.7 seconds at 102 mph. It even sounds sufficiently snarly when its revs climb above 5,000 rpm.

Plus, it actually looped around GM's challenging proving ground track two seconds faster than the fifth-generation Camaro SS. One of those wasn't on hand to feel the difference, but Chevrolet did provide a 2016 Ford Mustang GT with the Performance pack to sample back-to-back. It didn't last long. The Ford couldn't come close to the Camaro's grip, its gearing resulted in multiple extra shifts (even compared to the V6), and its trip computer ultimately warned that the rear axle was overheating after six hot laps, a 15-minute cool down, and my aborted hot lap thereafter. Chevrolet was admittedly expecting the Mustang to seem soft compared to the V6 1LE, but the early exit came as a legitimate surprise.

Quite obviously, then, the stock Camaro SS is the superior track car – we already knew that after our Pony Car Shootout – and it's made even better with the 1LE package. To put that into numbers, Chevrolet says the SS 1LE hits 60 mph in 4.2 seconds and does the quarter-mile in 12.5 seconds at 115 mph – both slightly better than a stock 2016 SS. More impressively, it loops the Milford proving grounds track three seconds faster.

In other words, if you want a Camaro, you should really want the 1LE. It's well worth the extra $4,500 for the V6 or $6,500 for an SS, and it doesn't require stomaching excessive boy racer styling add-ons. It really does beat an M4 around a track, and believe me, you don't have to be a Camaro guy to appreciate it.