Honda has confirmed another injury caused by a faulty Takata airbag inflator in one of its vehicles. The incident occurred on March 20 in Florida to the driver of a 2003 Honda Civic, and according to Reuters, police and hospital reports indicated that shrapnel from the ruptured inflator struck the person in the neck.

Honda has indicated that the owner was notified about the airbag at least four times – three of those for the driver's side. The mailings dated back as far as September 29, 2014, and as late as March 23, 2015, which was three days after the crash. The vehicle was eligible to receive new inflators on both sides.

In March, Honda issued a high-profile warning to owners in newspapers and on the radio to get their cars fixed. The automaker also broadened its recall during the month to include 100,000 more vehicles, which brought the US total to around 5.5 million.

So far, the faulty inflators have been linked to at least six deaths and 139 injuries. In one case, a woman in Florida has filed a lawsuit alleging that she became a quadriplegic when a piece of shrapnel in a 2001 Civic struck her in the neck, and an incident in Texas reportedly caused a man's death.

Re: Confirmed Rupture of Takata Airbag Inflator in Florida
April 13, 2015

American Honda has confirmed that the Takata driver's airbag inflator ruptured in the crash of a 2003 Honda Civic on March 20, 2015 in Florida. This crash resulted in an injury to the driver of the vehicle. Our thoughts and sympathies are with the driver and his family during this difficult time.

The legal representative of the owner involved in this incident has acknowledged in comments to media that a March 23, 2015 mailed notification was received by the owner. However, multiple mailed notices previously went to the same address, and none of these notices were returned as undeliverable.

The vehicle involved in this crash is included in a recall affecting the passenger's front airbag inflator (14V-700) and a safety improvement campaign affecting the driver's front airbag inflator (14V-351), and our records indicate that neither of the necessary repairs was ever completed. American Honda has sent one mailed notice related to the passenger front inflator and three mailed notices related to the driver front inflator, the earliest of which was sent on 9/29/2014.

Honda is currently in communication with representatives of the driver in an effort to further investigate the situation and to address their concerns.

Honda has already communicated preliminary information collected to date about this crash to the National Highway Traffic Safety Administration (NHTSA). 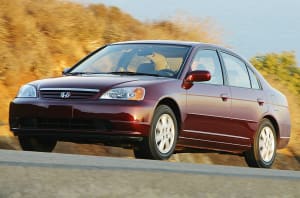