Pete Bigelow
The accident was minor. The aftermath was horrific.

Carlos Solis was waiting to turn left into a Houston-area apartment complex on January 28 when oncoming traffic struck the front-left corner of his 2002 Honda Accord, pictured above. He was stopped, according to a police report of the accident. The other car traveled at under 30 miles per hour.

He should have walked away from the fender-bender. Instead, the 35-year-old married man was killed when a defective airbag exploded and sent a large piece of metal shrapnel into his neck, his estate's lawyers allege in a lawsuit filed Thursday in Harris County, Texas. He bled to death while his younger brother and an 11-year-old cousin tried to save him.

Solis is one of at least six motorists killed by defective airbags made by Takata, a global automotive supplier. He may also be a posthumous poster child for federal legislation introduced earlier this week that would ensure car owners receive more timely information about safety recalls.

Currently, federal law does not require car dealers to tell prospective buyers about open recalls on used cars or whether defects have been repaired. Legislation introduced by Sen. Ed Markey (D-Mass.) and Sen. Richard Blumenthal (D-Conn.) wouldn't require that directly of dealerships, but it would mandate that car owners be notified of recalls when they apply for registration and at the time of registration renewal.

"Important recall notices can get bogged down with legalese, and busy consumers can miss a life-saving update," Blumenthal said. "This legislation provides a common-sense avenue to ensure every driver is reminded and encouraged to make the necessary repairs."

Such a law may have prevented Solis' death. Although his '02 Accord had been recalled in late 2011, his wife and lawyers say he had no knowledge of the recall when he bought the car used from All Star Auto Sales in 2014, nor did he know of the dangerous flaw when he set out to visit his parents on Jan. 18.

Only one month earlier, Congress held hearings on Takata and Honda's long-standing inaction related to the defective airbags. Documents showed both companies were aware of problems with the airbags as early as 2004, and a report in The New York Times detailed secret airbag tests, the results of which alarmed Takata engineers. Yet the company withheld the information from federal safety administrators.

Over a 10-year span, 11 automakers have issued two-dozen recalls for approximately 14 million cars that contain the defective airbags. Two weeks ago, the National Highway Traffic Safety Administration announced it was fining Takata $14,000 per day because the company hadn't fully cooperated with another federal probe into its faulty airbags. 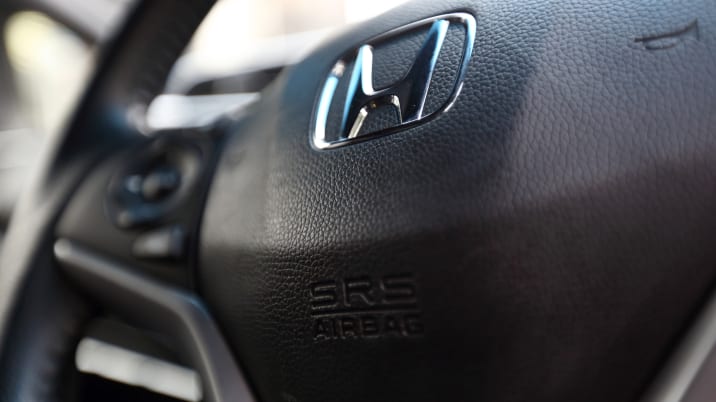 But Solis didn't know, and that lack of knowledge led to a gruesome death, according to court filings.

Instead of deploying normally in an accident, the malfunctioning Takata airbags explode with lethal force. That's what happened in Solis' Jan. 18 accident, which occurred on Cypresswood Drive in Harris County, just outside his parents' apartment complex. A piece of metal shrapnel from a ruptured casing severed Solis' carotid artery, jugular vein and fractured the cartilage of his throat, according to a county medical examiner's report.

He bled profusely from a gaping wound in his neck for several minutes. Neither his brother, Scott, who arrived on the scene quickly, nor emergency responders initially realized the shrapnel remained lodged deep within Solis' neck. Solis gasped for breath through his fractured windpipe before finally succumbing to his wounds, according to the court filing. He died in his brother's arms.

"Everybody out there who has one of these vehicles that has not had it fixed is at risk of having the exact same thing happen to them," Kidd said.