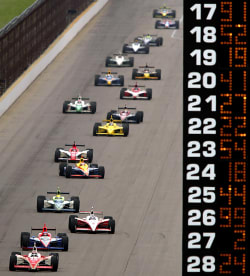 Anyone that's been to a race at the legendary Indianapolis Motor Speedway knows this to be true: The scoring pylon, which sat at the start-finish line and showed the positions of drivers as they lapped the oval has been horribly, terribly outdated, making it quite difficult to read. Considering this, the new, 92-foot-tall, $1-million, LED-adorned scoring tower that's just been erected is a huge improvement. Just compare the above image of the new tower with the inset image of the older model to see what we mean.

The new tower will see its race debut this weekend, as the NASCAR Sprint Cup Series rolls into Indy for the Brickyard 400. The new tower should be a big improvement over the 20-year-old pylon it replaces, allowing race organizers to better communicate with fans. That means fans will know whether there's a green, yellow or red flag, as well as what the separation is between drivers. It's even capable of video and animation, as shown in the video below.

Next on the docket for IMS is an upgrade to the equally antiquated digital video screens at the circuit. Scroll down for a walkthrough of the upgrade process from Doug Boles, the president of IMS.