Our date with the Lamborghini Veneno in the desert


One can only consider the Veneno an extremely fascinating machine.

Twelve humans have walked on the moon, yet only three humans will own a Lamborghini Veneno coupe.

The Italian automaker claims that its latest handcrafted $4 million supercar is "extremely exclusive," but we would venture to call that a gross understatement. Consider that Bugatti is making 450 Veyrons, Ferrari crafted 399 Enzos and Porsche assembled just 345 of its 959 supercars – you don't see any of those "extremely exclusive" cars on even a monthly basis. Now ponder the news that Lamborghini will make only four fully homologated street-legal Venenos, and selfishly offer only three of them for sale to the public.

After grasping the productions numbers (or the lack thereof), we consider ourselves rather lucky to have secured the only existing Veneno on the planet for a recent photo shoot in California's Mojave Desert (of course we asked to drive it, but no media has ever been allowed to drive it above walking speeds). After its arrival at the Geneva Motor Show earlier this year, the coupe made its North American debut at the recent Pebble Beach Concours d'Elegance. The day after the show, it traveled by enclosed truck to our secret photo location before being wrapped up securely and shipped by air back to Sant'Agata Bolognese, Italy.

Standing over the Lamborghini, watching the warm sun reflect off its gray metallic-look paint, one can only consider the Veneno an extremely fascinating machine.

The Veneno is an exercise in lightweight composite building technology.

Lamborghini told us that the two-seater was created to push the envelope of design and entertain the automaker's future styling cues. According to those who penned the shape, its razor-sharp, carbon fiber figure is not only edgy, aggressive, sinister and evil, it's completely functional. Every detail in the bodywork has reportedly been engineered to optimize downforce, maximize cooling and minimize drag in the same manner as a racecar. Consider its front end a large aerodynamic wing, with channels to guide air over and around the windshield. The fenders are set away from the body, just like a sport prototype racer, to optimize airflow around the sides and feed air into the radiators, brakes and intake. The rear wing is adjustable, and beneath the coupe is a smooth underbelly to minimize turbulence and lift.

But the vehicle is not an entirely clean-sheet design. Based on Lamborghini's own Aventador - a scene-stealing exotic by every definition of the term - the Veneno is an exercise in lightweight composite building technology. While some aluminum subframes are shared with its more common sibling, the Veneno boasts its own specialized carbon-fiber monocoque tub, carbon-fiber body panels and an interior that features patented forged composite seats and woven carbon-fiber Carbonskin cloth (think carbon-fiber fabric covered with a soft and flexible resin). Where the Aventador tips the scales at 3,472 pounds, the Veneno weighs just 3,190 pounds. 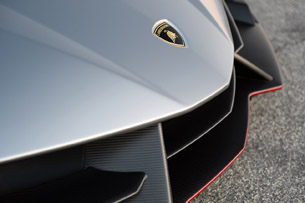 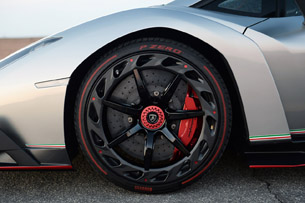 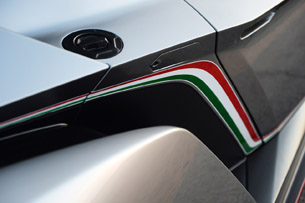 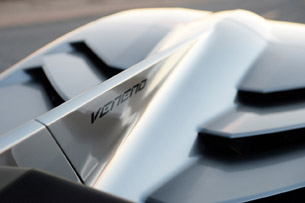 The machine will crack the 60-mph barrier in 2.8 seconds and not stop accelerating until it hits 221 mph.

According to Lamborghini, "Veneno" is the name of one of the strongest and most aggressive fighting bulls, credited with killing the famous torero José Sánchez Rodríguez during a Spanish bullfight in 1914. Therefore, it makes perfect sense that the muscle buried beneath the Veneno's carbon fiber skin is a naturally aspirated 6.5-liter V12 tuned to deliver a baneful 750 horsepower. With a lightweight Independent Shifting Rod (ISR) single-clutch automated gearbox and permanent all-wheel drive, this machine will crack the 60-mile-per-hour barrier in 2.8 seconds and not stop accelerating until it hits 221 mph.

While you digest its performance, take a closer look at the Veneno's scissor doors. Immediately behind their trailing edge, stationary on the body, is a painted stripe emblazoned with the three colors of the Italian flag: green, white and red. The vehicle that made its rounds at Geneva, Pebble and at our photo shoot pictures is the museum car, distinguished by a red stripe running along the edges of the front/rear fascia and rocker panels. Each of the remaining three vehicles, a trilogy of sorts, will feature the same solid wrap-around stripe but in one of the flag's three colors. 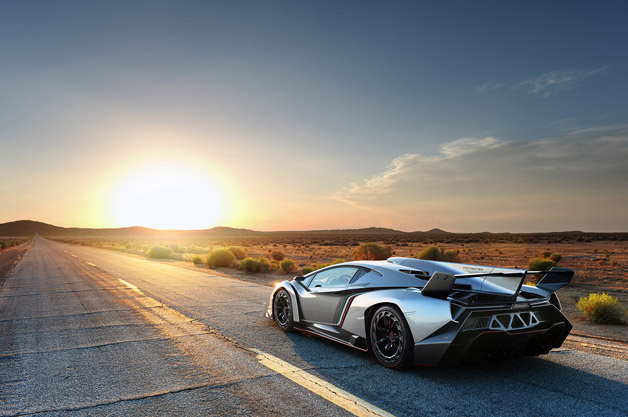 Even if you had the millions in hand to purchase one of the three production vehicles, you are too late.

Unfortunately, even if you had the millions in hand to purchase one of the three production vehicles, you are too late. Lamborghini pre-sold all of its Venenos before they bonded the very first flared fender together. We asked and learned that two went to buyers in the US and one went to a client in the Middle East (if it's of any comfort, all three owners have told the automaker that they intend to drive their vehicles on public roads) - Lamborghini expects to deliver the first car in the fourth quarter of this year.

The odds are that you are one of the 7.17 billion people on earth who do not have a Lamborghini Veneno coupe on order. You will never have the opportunity to drive one, sit in one or even touch one. In fact, and in all likelihood, billions of you will never ever see one in person. And this is precisely why we lugged our camera equipment out to the remote desert and pored over this outrageous Italian machine. Enjoy our high-res photo gallery.

[Just a few weeks ago, we learned that Lamborghini will be making nine Veneno Roadster models, each with a price tag of about $4.4 million. Considering how quickly the coupe sold, we'd suggest getting your name on the list today. –Ed.]