Mark Pereira
Watching your car burst into flames before your eyes is never good news, and it's even worse when you're mere moments away from trading it in at the local dealership. This Car-B-Q blaze apparently erupted at Acura 2000, a dealer in Brampton, Ontario. As the video tells us, the unlucky customer saw his 2004-2008 Acura TL trade-in suddenly catch fire and go up in resale-value-killing smoke.

According to the hyped-up cameraman (who evidently works next door at Northwest Lexus) and his eccentric play-by-play commentary, this Acura owner is about to be left without a ride home and might want to consider switching to a Lexus instead.

Scroll down to watch video of the drama unfolding as fire fighters put out the mysterious blaze before anyone – except the car – was harmed.


UPDATE: The owner of the 2008 Acura TL has contacted Autoblog to clarify the video above. Unlike what the narration suggests, he was not at the dealer to trade in his car. According to his email, he had brought in his car earlier for a power steering recall (to prevent a possible fire), and "...within 24 hours of the recall job being completed, the car burst into flames. It was caused by the power steering fluid leaking onto the catalytic converter."

The owner's tale of woe doesn't end there, however. He says that "Acura agrees that the mechanic had screwed up the job, and that is what caused the fire. However, both the Acura dealership and Honda Canada refuse to do anything about the situation. My insurance company was the one to compensate me." 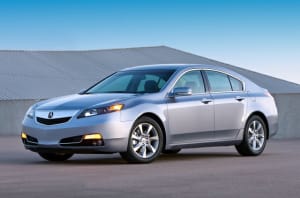