2020 Lamborghini Urus Road Test | How many bags of steer manure can it haul?

The question posed in the headline probably got your attention, as a headline should. You might also be wondering how many wet, muddy golden retrievers the 2020 Lamborghini Urus can carry home from a swim. Or how many seat-kicking Girl Scouts will drop their ice cream cones as you fling them around in your Urus on their way to a field trip. Or how many board-feet you can load while on a Lamborghini lumber run to Home Depot.

And the answer to all of the above is: Beats me. If you think I tried any of that in a car with a $200,000 base price — $270,000 as tested — then you’d be almost as nuts as me if I had. Most of those activities were probably specifically forbidden in the fine print of the 18-page loan agreement anyway.

Yes, the Lamborghini Urus is an SUV. (It’s pronounced “Ooh-rous,” by the way.) No, it is not that kind of SUV, the kind that has “utility” as its middle name. Nobody who buys this is going to get it anywhere close to fertilizer, mud, ice cream or splinters. Nobody is cross-shopping the Urus against a Highlander or Explorer.

It is, instead, an extreme expression of the quest for more power, more luxury, and the craze for crossovers. Auto brands, as they are wont to do, are building the high-riding vehicles that people want, which happen to be vastly profitable. Ne plus ultra brands such as Rolls-Royce, Bentley and Lamborghini are not immune to that lure, and so they are now offering SUVs with arch luxury, uber performance and the most hoity brand cachet. Just wait until the Ferrari Purosangue hits the streets.

And sure enough, the SUV formula works for the high rollers, too. Lamborghini sold more than 8,200 vehicles worldwide last year, an annual increase of 43%. And that’s because 5,000 of them were the Urus.

The window sticker says 70% of the car’s content is from Germany — put another way, it’s mostly an Audi. But the 30% that is Lamborghini is what makes its base price nearly three times the $68,200 base price of the mechanically related Audi Q8. 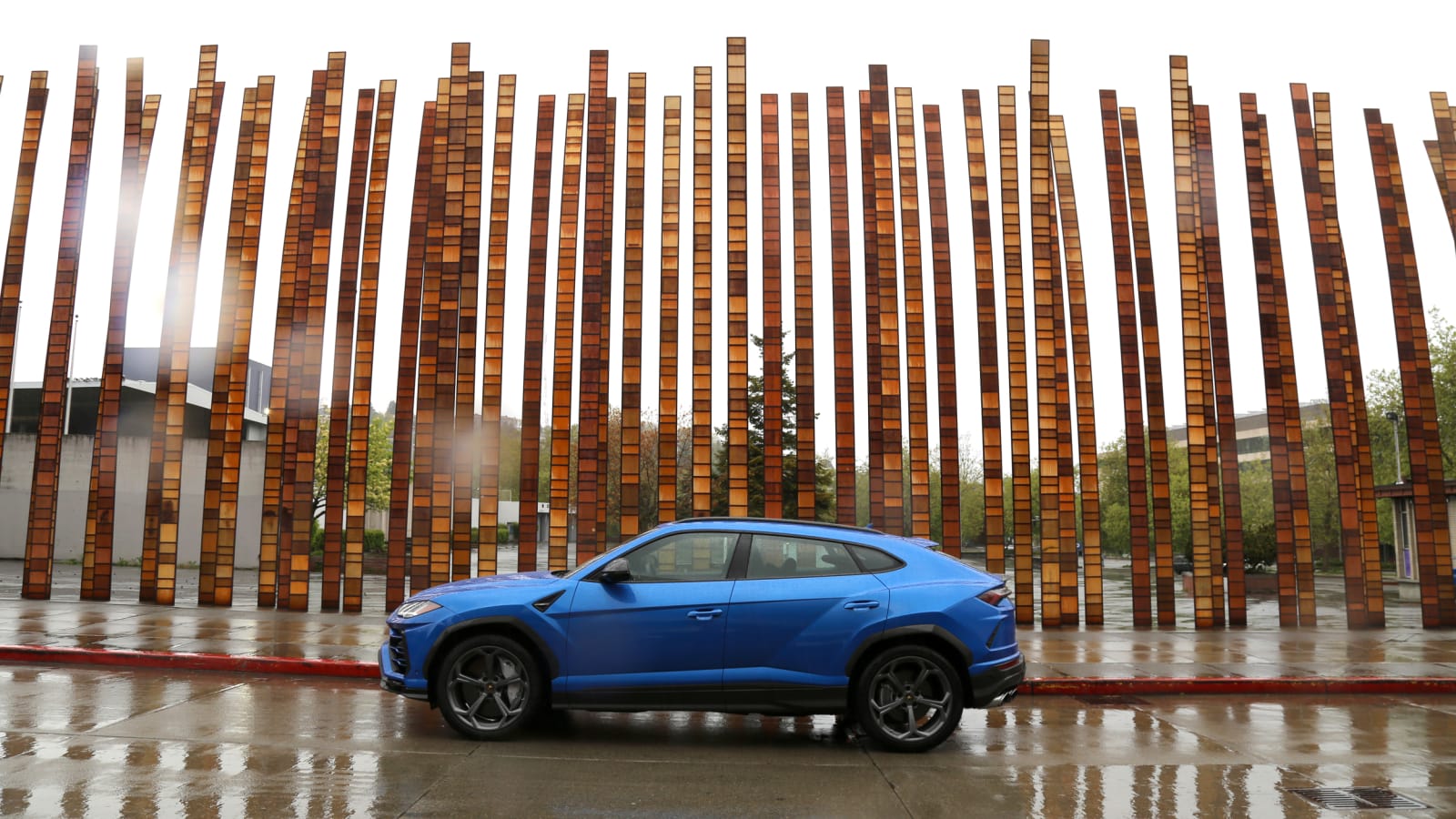 When the opportunity arose to drive a Urus for a weekend, I puzzled over what exactly to do with it. With more lowly SUVs or trucks in the press fleet, auto writers typically load and haul their families and stuff to see how well the utility vehicle in question does its job in everyday life. But that’s not possible with the Urus. You can’t in good conscience get the thing dirty, or risk a scuff or scratch. Besides, you can tell simply at a glance it’s too impractical for much of that sort of thing. The cargo hold has a decent footprint, but the volume is small at 21.75 square feet due to the steeply sloping roofline. If you drop the back seats, it creates a long space, which would be plenty of room to roll out a sleeping bag. (Lamborghini Urus owners probably do a lot of car camping, for sure.) But the fastback design sharply restricts cargo height. This car will haul some suitcases, preferably a matched set in fine Italian leather. But your golden retrievers are going to conk their heads. 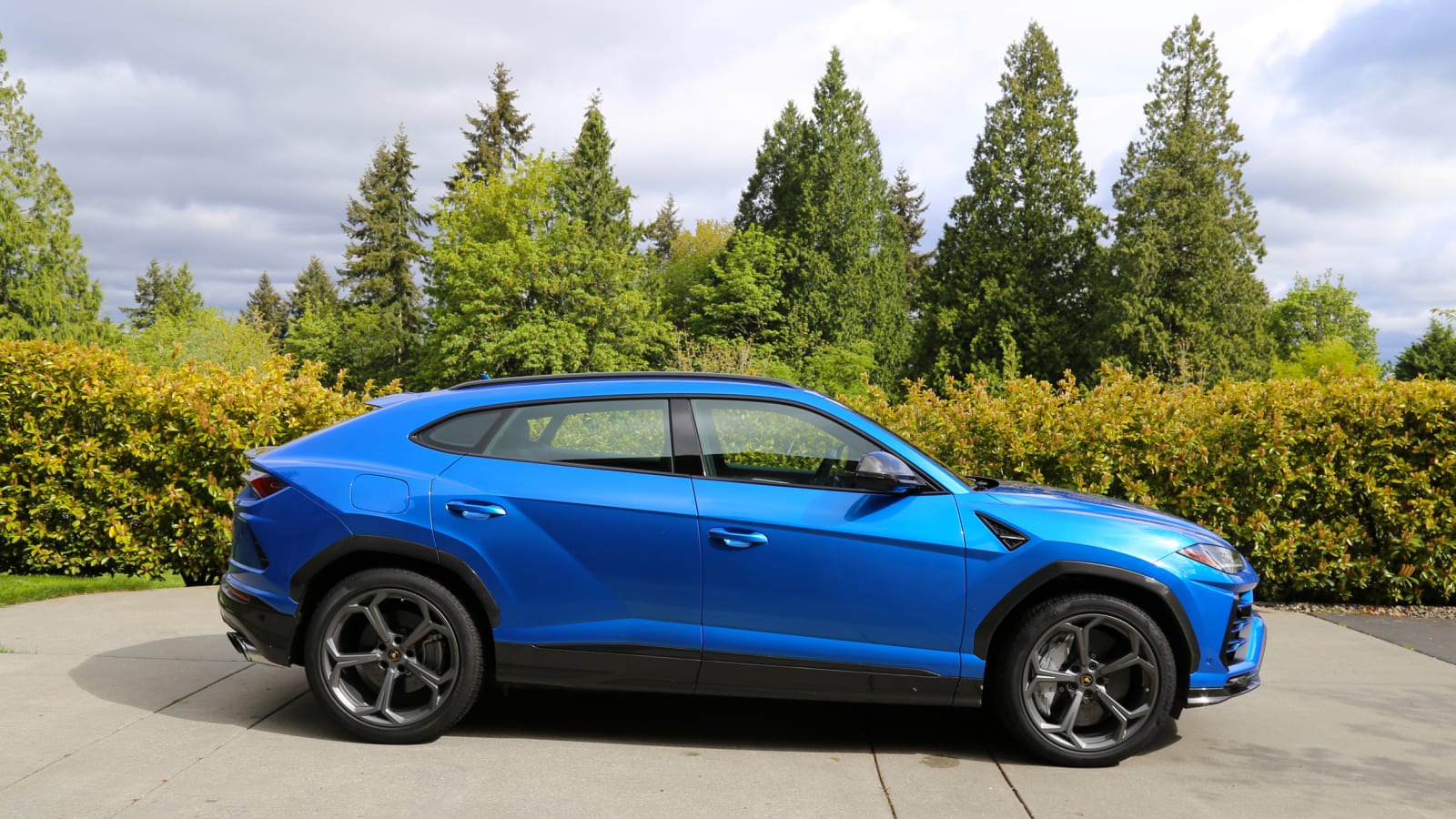 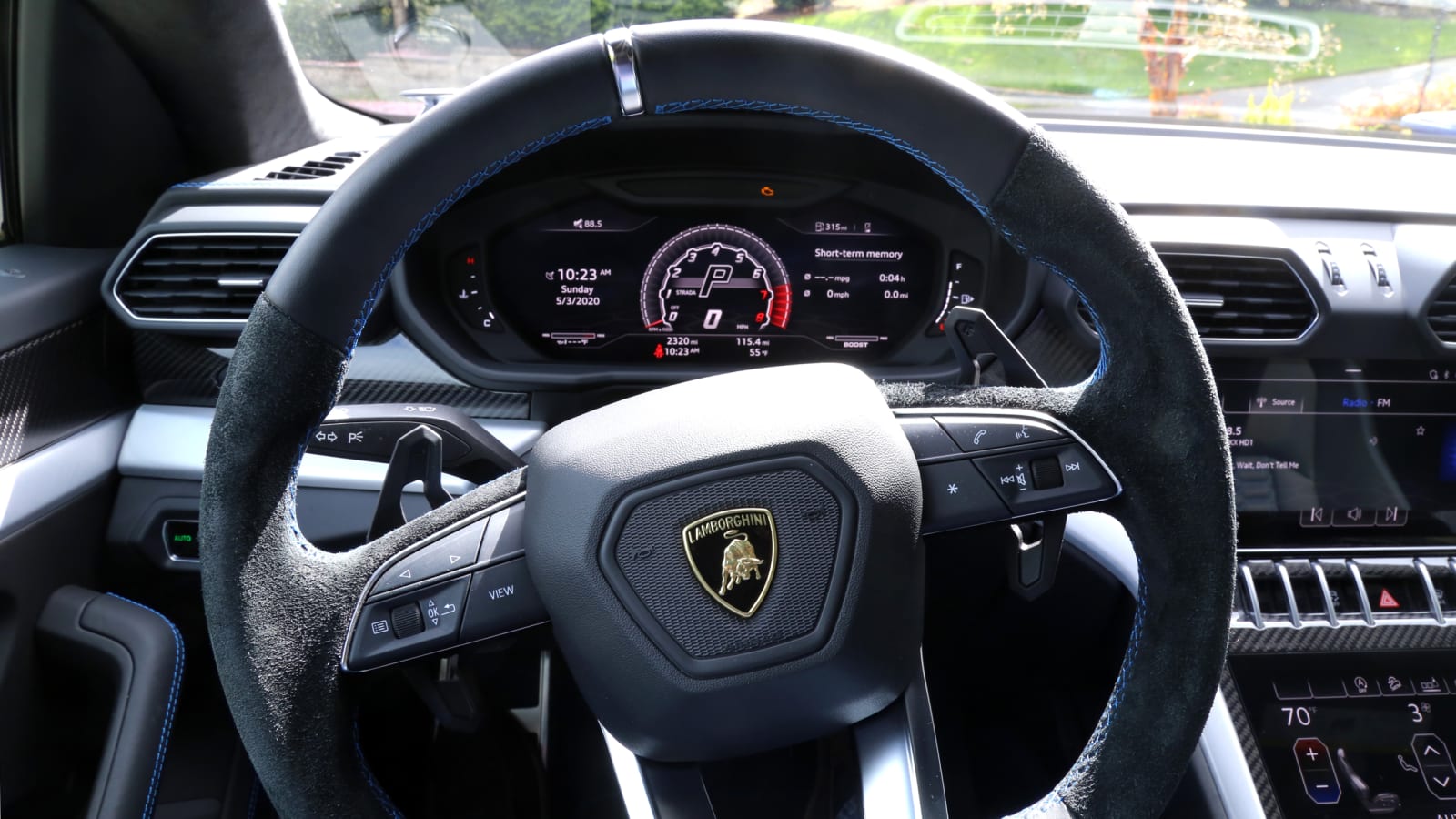 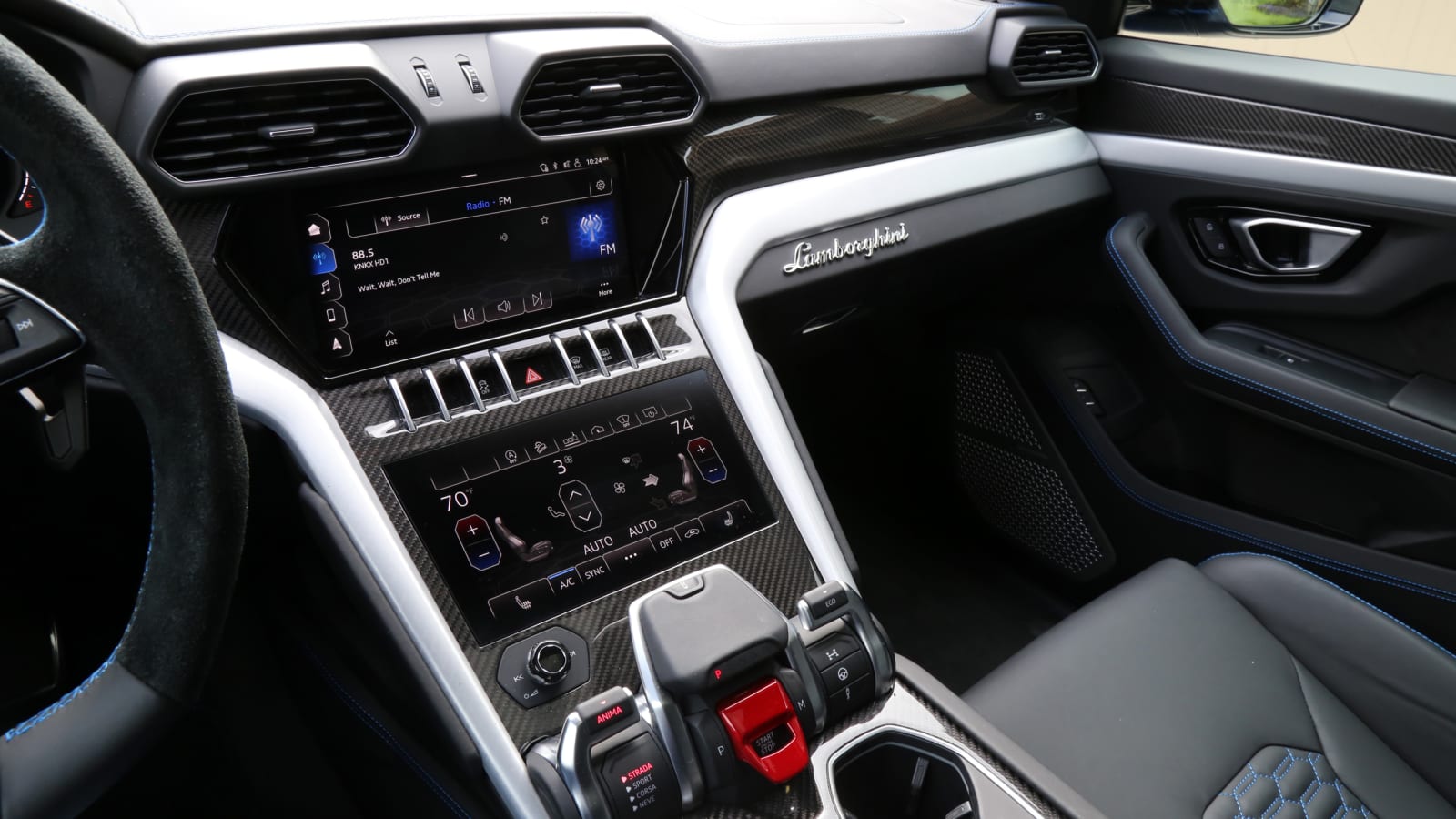 Another practical consideration: In this time of coronavirus cleaning, how do you disinfect a suede steering wheel? I’m not going anywhere near that with Lysol.

To a limited degree, what you can do with the Urus is what you do with any other Lamborghini: Drive it. At first, it’s intimidating. You are piloting a quarter of a million dollars down the road. But it’s not solid gold, it’s just a car: metal, plastic, leather, like the other cars around you. Yips about driving such a rarified car in the real world quickly subside to a dull roar of anxiety. On three of four crossings of the Highway 520 floating bridge I was so focused on driving I forgot to hold up my toll transponder.

You’ve probably already read our first-drive review of the Urus and our trip to the track with it. Those outings gave a great sense of how it performs, but they were in controlled environments. Professional driver, closed course, as they say. For my weekend with the Urus, I did boring everyday stuff: ran errands, drove the interstate, went into the big city. Schlubby suburban dad masquerades as supercar driver. But I reverted to my own car when sent on a grocery run — what if I got a leaky milk carton? 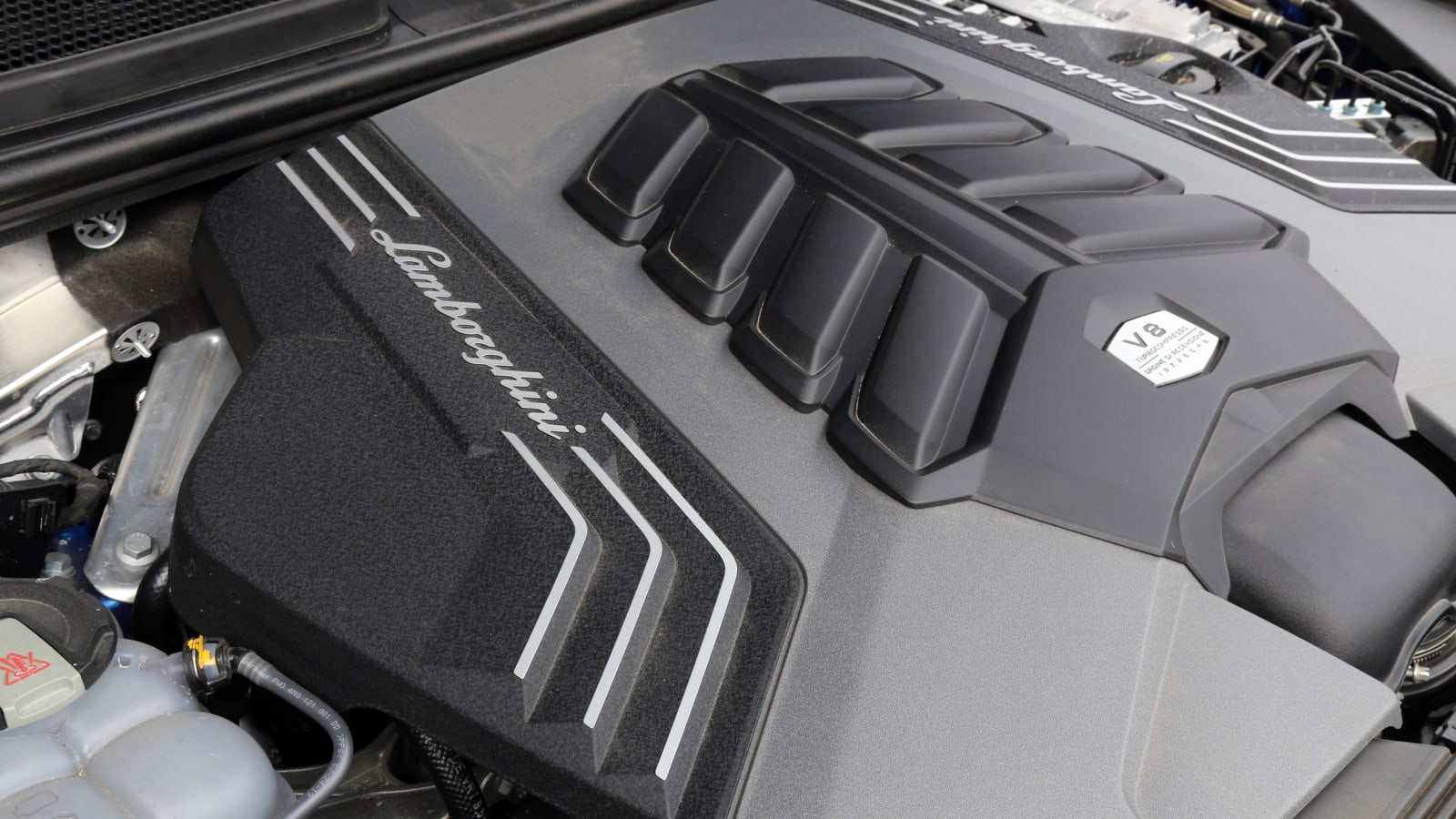 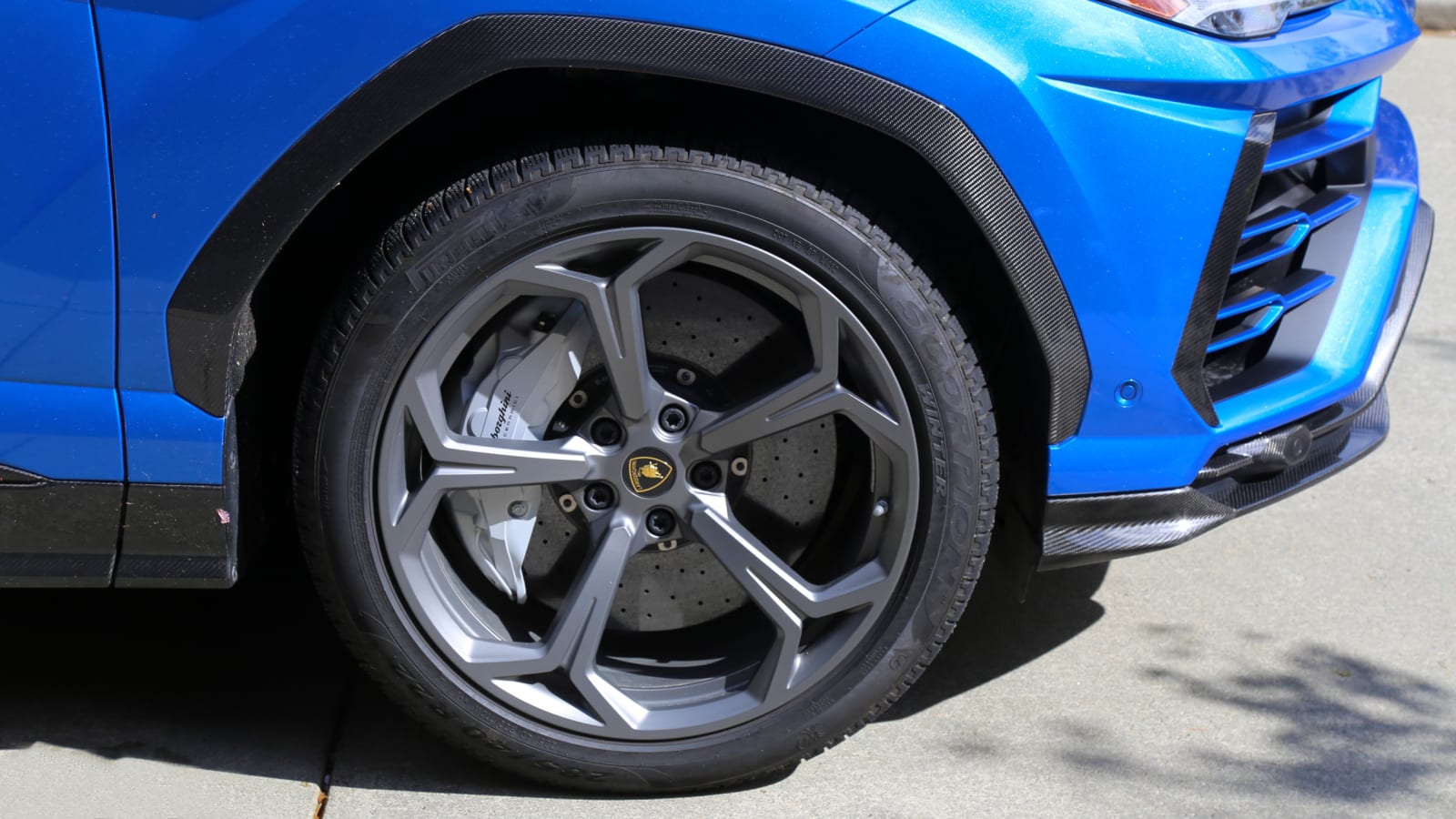 The Urus does not do milk runs. Its 4.0-liter twin-turbo V8 generates 650 horsepower and 627 pound-feet of torque and launches the 4,800-pound beast from zero to 62 mph in 3.6 seconds, and to a top speed of 190 mph. Its six-piston carbon-ceramic front brakes on massive 17.3-inch rotors can then pull it from 62 mph to a stop in an eyeball-extruding 110 feet, and can do that kind of hard braking all day long.

With all of that capability at my disposal, I romped it down an onramp a few times, enough to make my teenager yelp from the back seat. I then quickly let off to keep the speed legal, but it was still reached immorally fast.

And sure, you can fling the Urus into turns and over sweeping interchanges and get a taste for the superb handling and stability its air suspension and four-wheel steering would impart at much higher speed on a track. You can sense how weird it would be to have such a big car be so planted at the limits.

But you’re really just scratching the surface of what it can do. There’s nothing daily life can throw at this that does it justice. It’s robbed of its true destiny like a caged animal in a zoo.

The factor you can adequately judge is how others judge you, how they react to the vehicle. For those disinterested in cars, it might look like just another big blue drop in an ocean of SUVs, and we saw plenty of people in traffic for whom it didn’t register. But many reacted — the car demands a reaction. The sound alone turns heads; flip it into Corsa mode and you’ll turn heads all up and down the block. Young backwards-cap-wearing dudes, especially, waved and nodded and pulled out cellphones to take pictures. They may have been dreaming of a Lambo since they were 5 years old. One threw a hand sign; it was either the devil’s horns to convey the car’s wickedness, or the Texas “Hook ‘em ‘Horns” to honor the bull. We used the Urus for an errand into the city, then regretted taking such an over-the-top ride into a sketchy area. It was as conspicuous as if we had landed in a UFO. As I stood guard over it, a day-drinking gentleman asked for a ride; I declined, even after he offered me $10. The car is a magnet for attention, not all of it welcome.

Lamborghinis can't be ignored. The hood zigzags around the bull logo. The whole front end opens up to gobble air. The roofline slopes to where “Lamborghini” is emblazoned across the tail, so those in its wake can see what just ate their lunch. The name dominates the dashboard, so your passenger will be suitably impressed, if not by your car then by your credit rating. Even the gas cap says Lamborghini and is crafted from carbon fiber like the rest of the car’s trimmings, all of it owing its existence to the Automobili Lamborghini Advanced Composite Structures Laboratory, aka the Lamborghini Lab, here in Seattle. 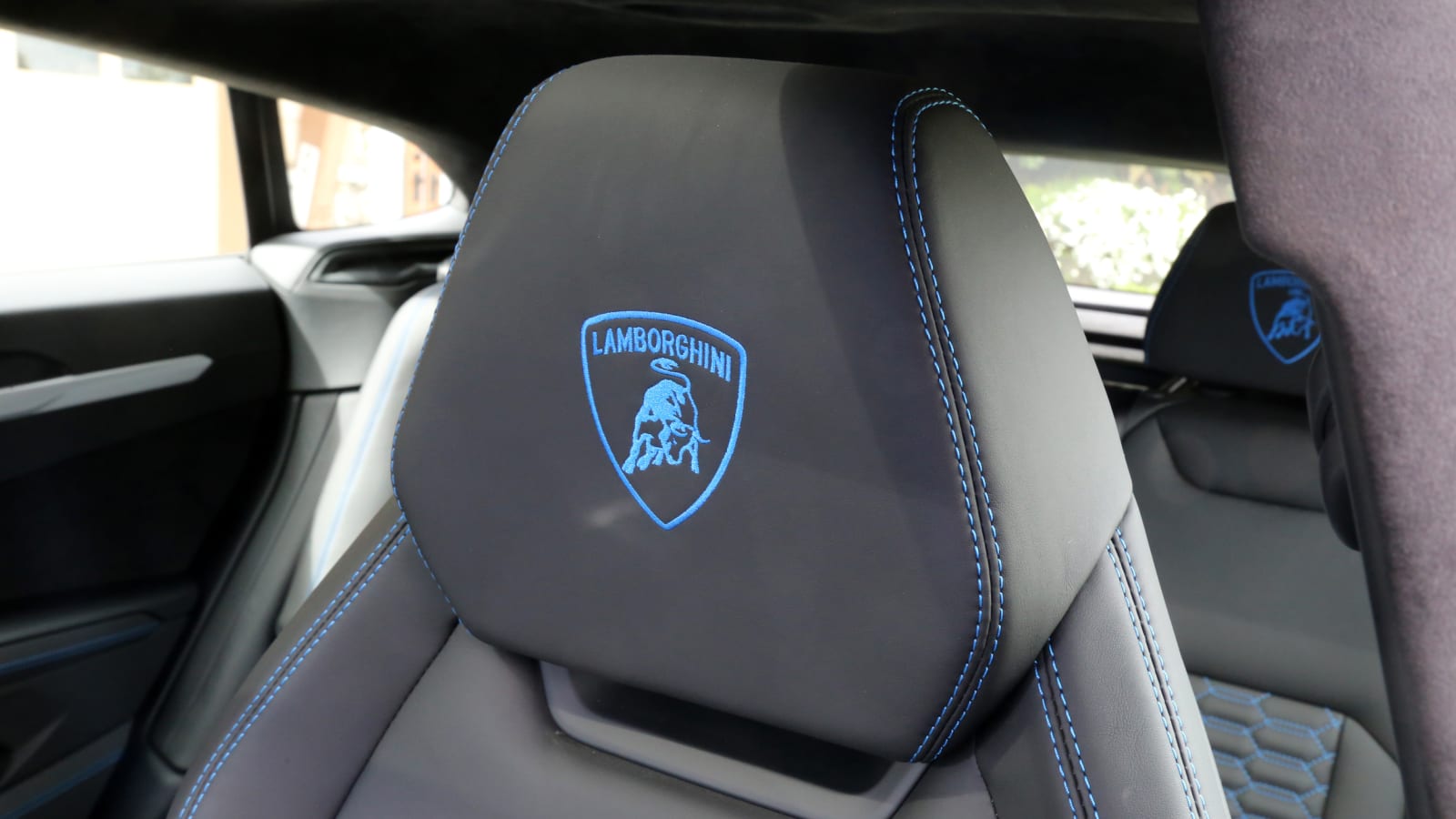 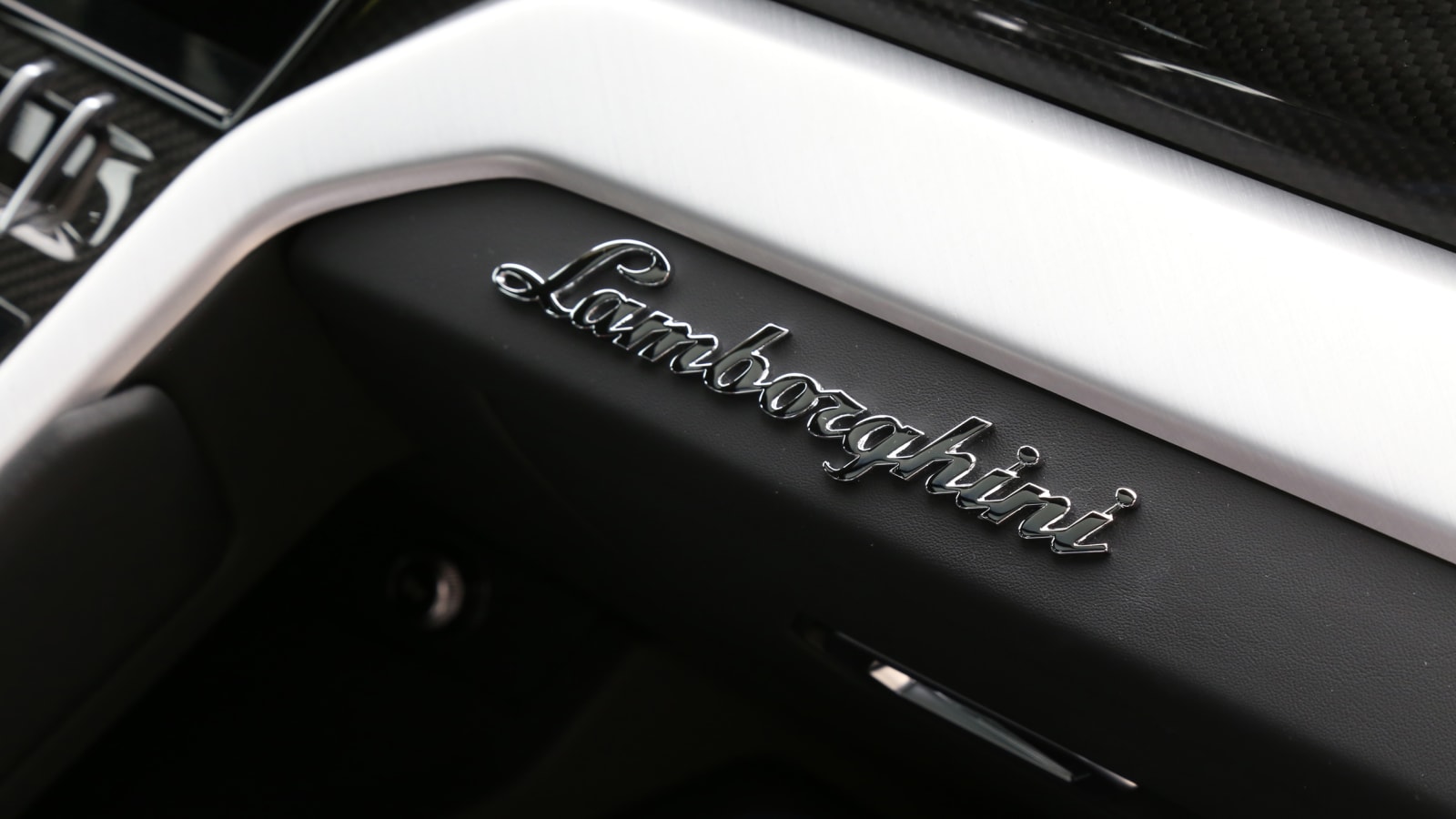 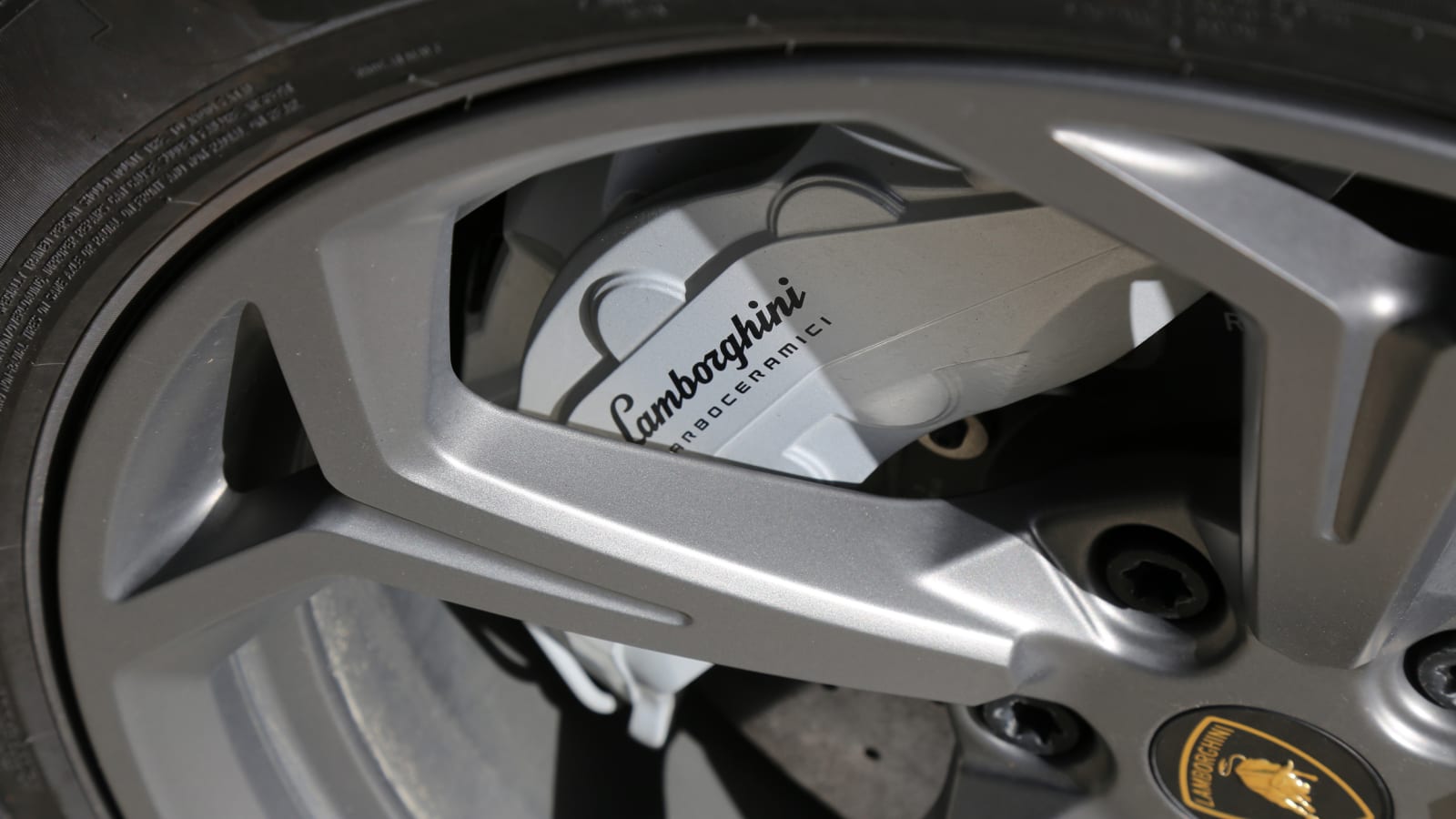 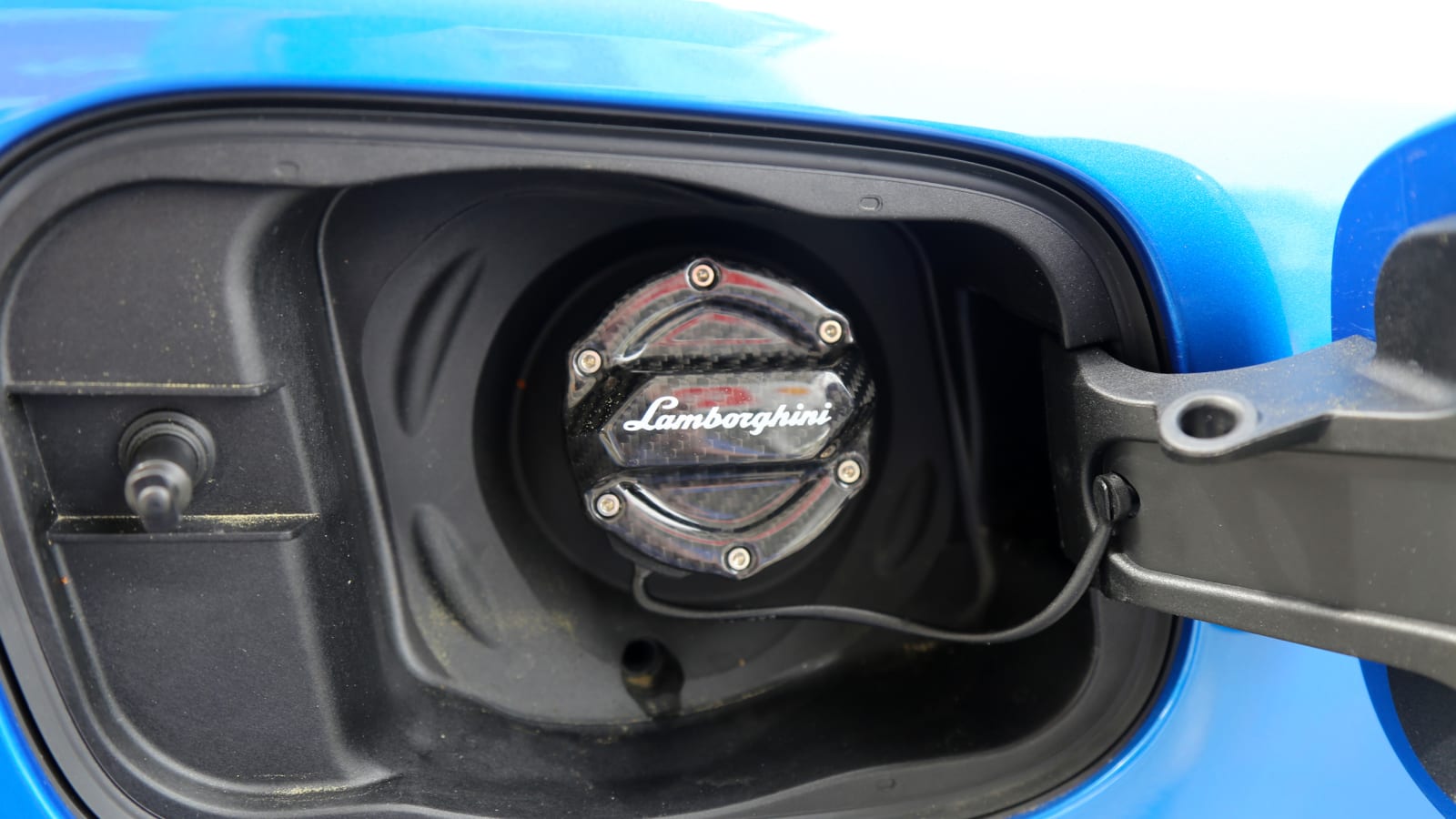 It's a design language with the precision of geometry, the kind of geometry used to calculate the trajectories of speeding objects. Hexagons galore repeat themselves inside and out. The car is hunkered, with wide hips. It’s a bull preparing to clear the streets of Pamplona, and a raindrop at terminal velocity. Many (most?) people have criticized the design as ugly, which fits a general distaste for the idea of an SUV Lamborghini. (The comments on our first review are uniformly negative, leading off with, “The shark has been jumped.”) I don't generally admire the brutal look of a Lamborghini, but this grew on me a little.

Though it was fun to see how the top 0.01% of the other half lives for a weekend, by Monday I was happy to return the Urus to the dealership and reclaim my humble Volvo, which had been keeping company with Bentleys.

But its price and lack of utility mean it's for a very few, and they don't live in the suburbs — it's an “Ooh-rous,” not a “You’re us.” 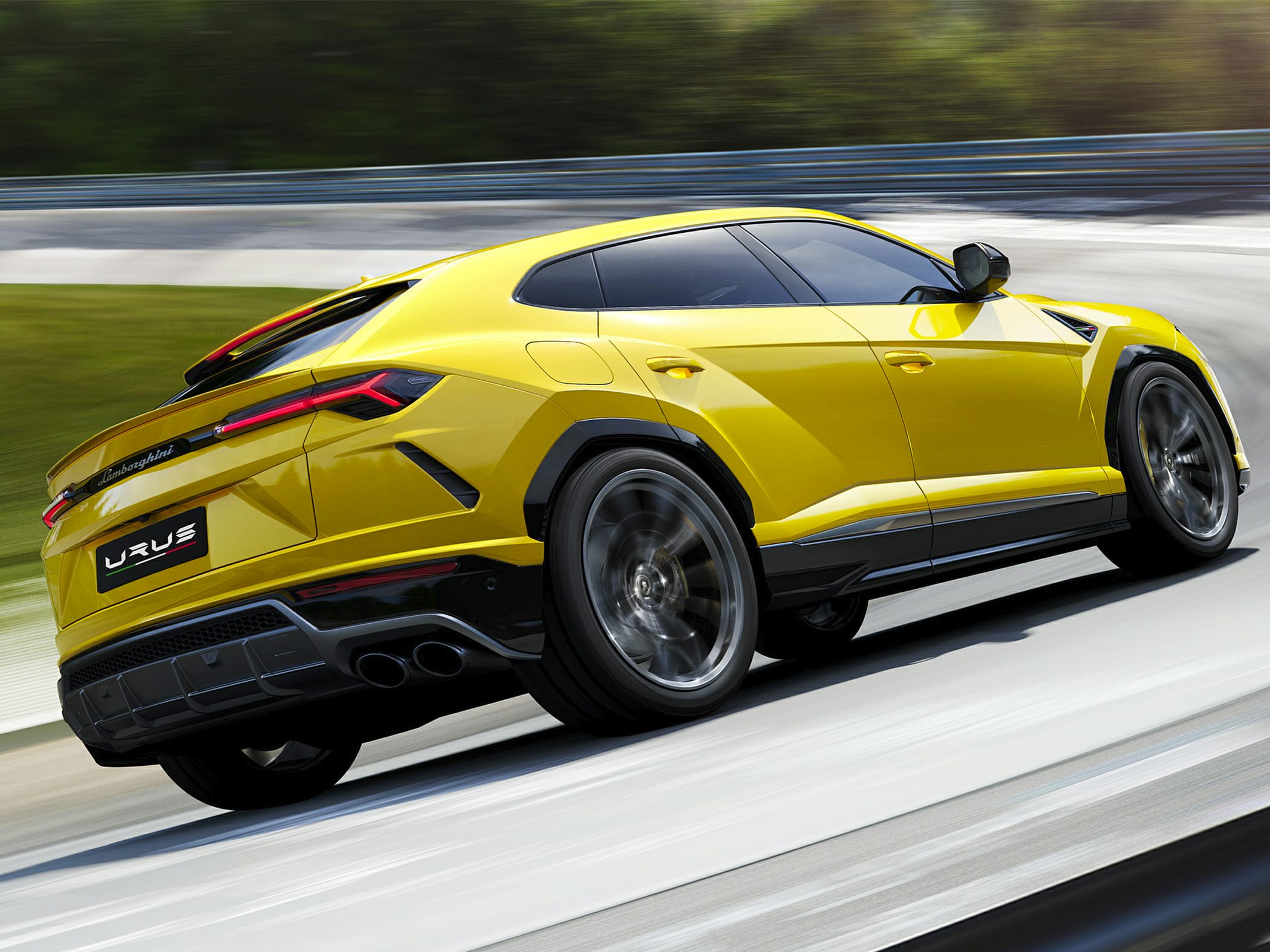 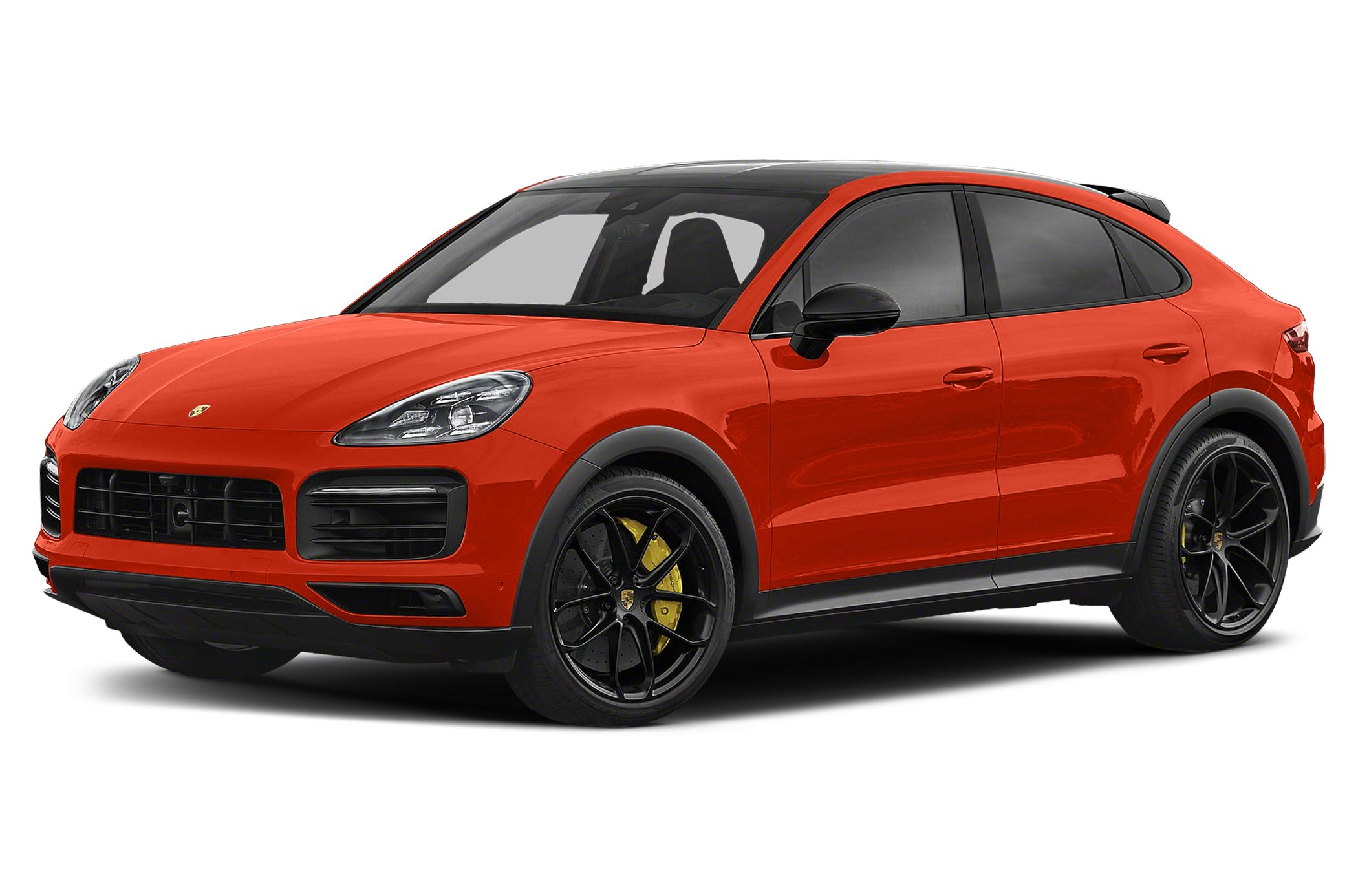