2020 Jeep Wrangler Luggage Test | How much can you bring to the Rubicon? 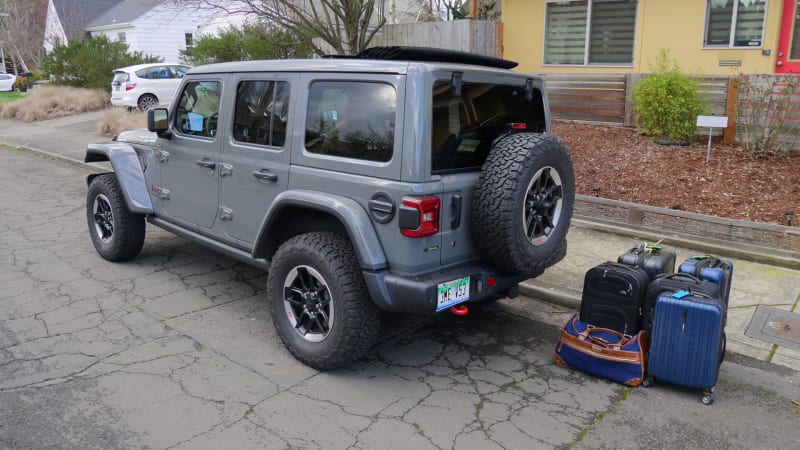 The 2020 Jeep Wrangler Unlimited, aka the four-door JL, is the most family friendly version yet of Jeep's iconic off-roader that for the vast majority of its existence has been about as far away from "family friendly" as you can be. Anything you can drive around with the doors removed usually isn't the best choice for hauling around Junior. That said, the latest version is vastly more comfortable and refined, with a driving experience no longer evoking such responses as "Holy cow, this steering is spooky" and "Ouch." This is my first extended experience with the new Wrangler, and color me impressed.

So, for passengers, the Wrangler Unlimited really can be a perfectly pleasant road trip companion (my father-in-law has repeatedly driven his JL Unlimited from Los Angeles to Portland and still frequently declares it the best car he's ever owned). But, as this is a luggage test, how much luggage and stuff in general can you bring along for the trip? Let's find out. 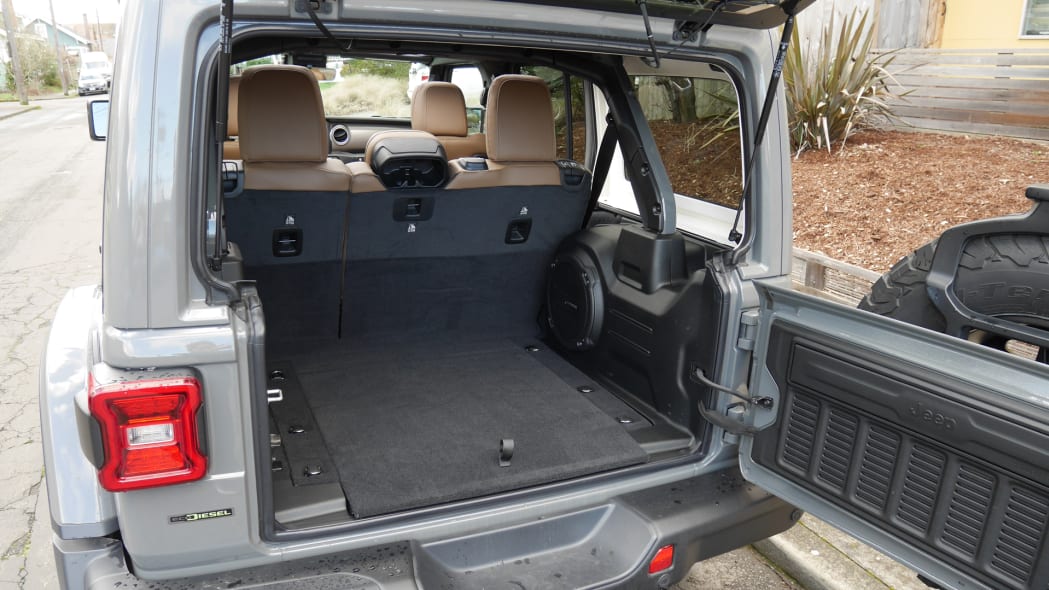 According to the specs, the four-door Unlimited has 31 cubic feet of space behind its back seat, which is a massive increase from the two-door's 13. Perhaps it's not surprising that so few people buy the two-door now. That 31-cu-ft number would put the Wrangler in the middle of the compact SUV crowd. A Jeep Compass is smaller at 27.2, while the Honda CR-V is 37.6. A Kia Sportage is basically equal.

That said, as you can clearly see, this is a much different space than what you'd find in a crossover. The space is taller and boxier (good!), but then it's narrower because of the wheel wells (bad!) and has those prominent structural supports (weird!). Remember, that boxy roof is removable and doesn't really do squat if you go ass over teakettle.

But before we get to the luggage ... 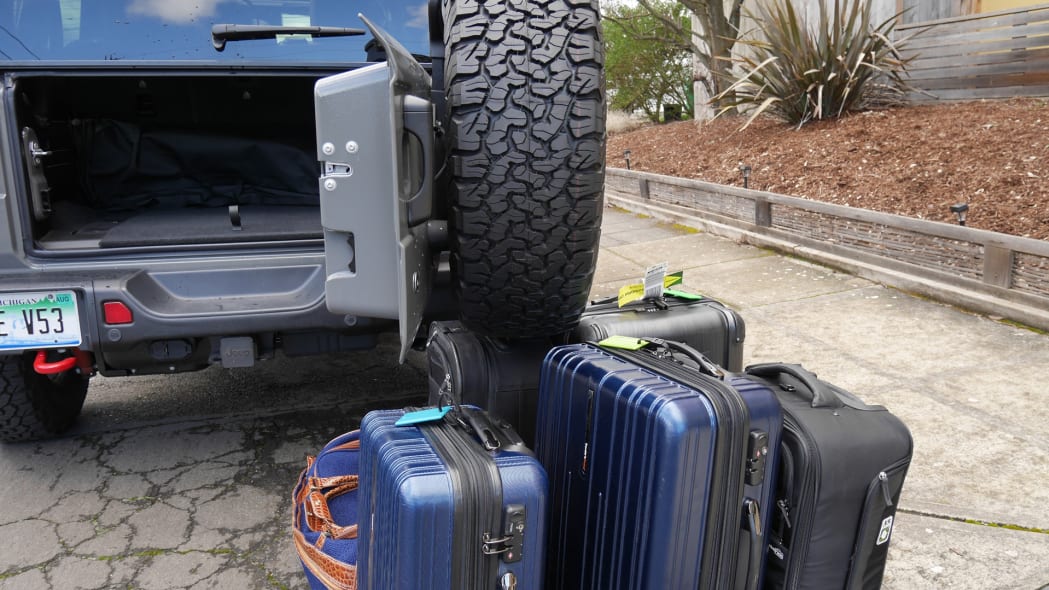 Allow me to open the swing gate into all my bags artfully arranged for the picture at the top of this page. That's never happened before, but then nothing has a cargo area aperture like this one.

With the bags out of the way, I discover there are two detents available when opening the swing gate. This is an excellent feature. 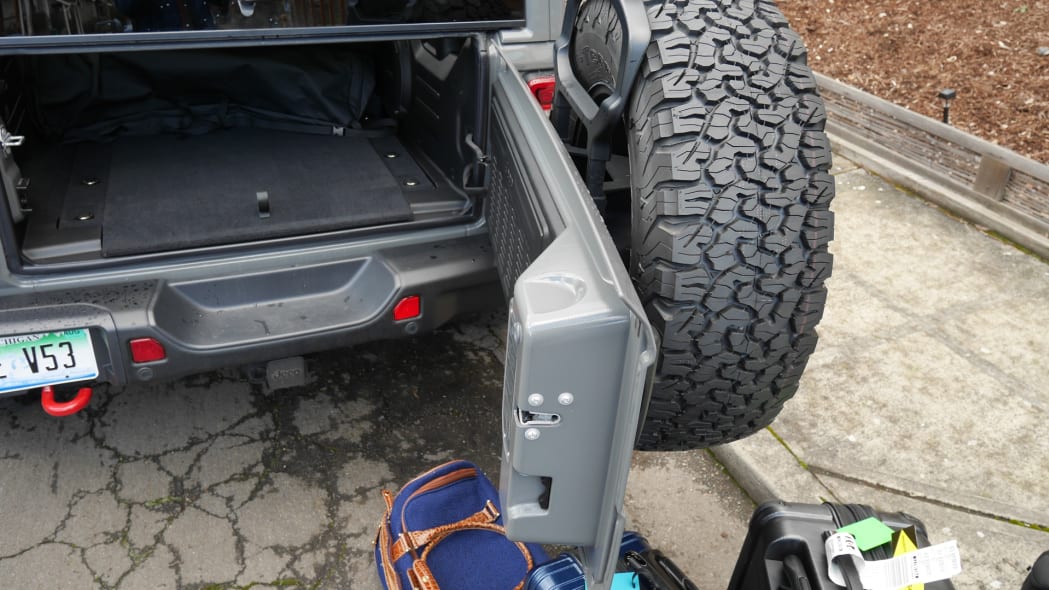 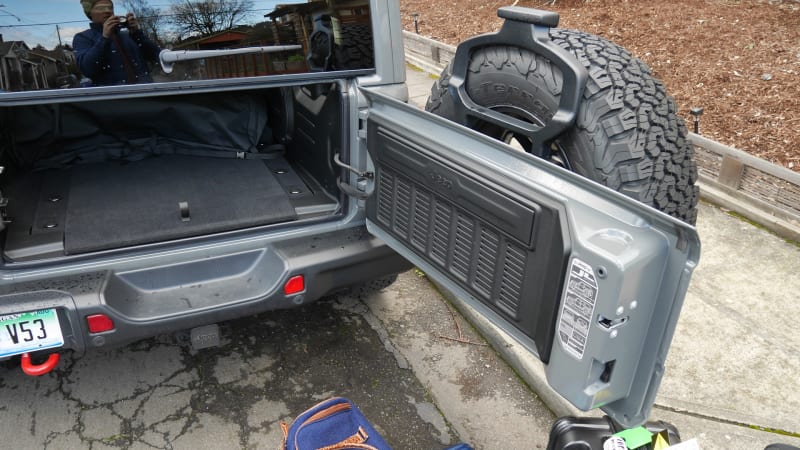 Also note that the Jeep grille is referenced inside the swing gate. Oh Jeep with your easter eggs. I dig'em. For those who don't, lighten up, Francis.

Oh, and one more note. You open the swing bit first then open the glass. This is the opposite of other swing-gate SUVs — I can only think of the original Honda CR-V at the moment, but I'm sure there are more. Comment away! 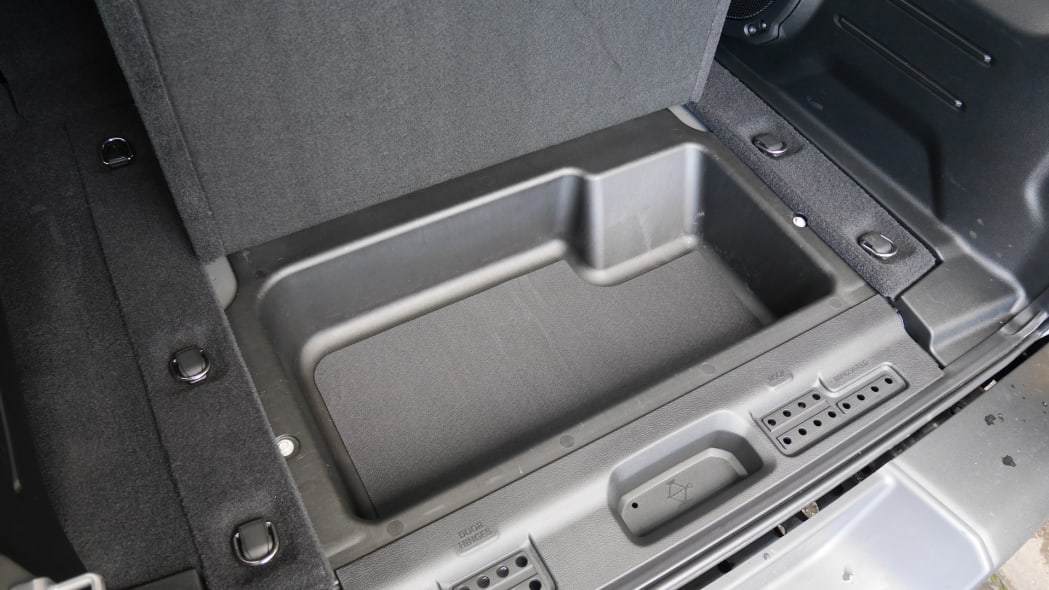 Underneath the cargo floor you'll find this decently sized bin to stow away your jewels. Or, you know, whatever.

OK, on to the actual luggage of the luggage test. As always, I use two midsize roller suitcases that would need to be checked in at the airport (26 inches long, 16 wide, 11 deep), two roll-aboard suitcases that just barely fit in the overhead (24L x 15W x 10D), and one smaller roll-aboard that fits easily (23L x 15W x 10D). I also include my wife's fancy overnight bag just to spruce things up a bit (21L x 12W x 12D). 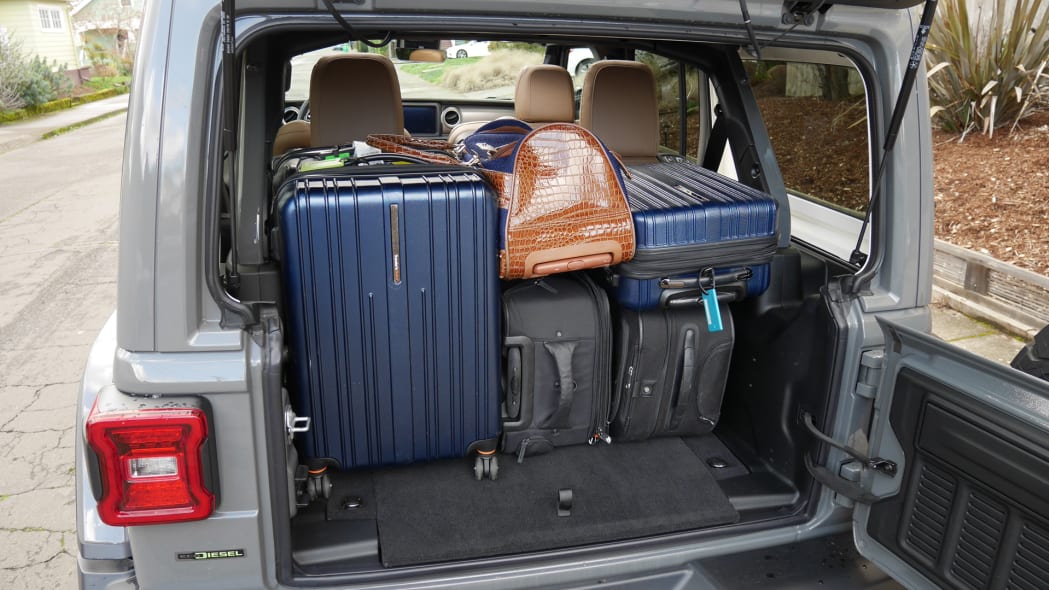 So everything fit, but it was a squeeze in that formation, and to be honest, if the bags were full, I'm not sure it would all fit. Also, keep in mind there's actually less space remaining than it seems because of the swing gate hinge and its locking mechanism thingy pod (give me a break, it's a Friday). You see below how much space you lose. 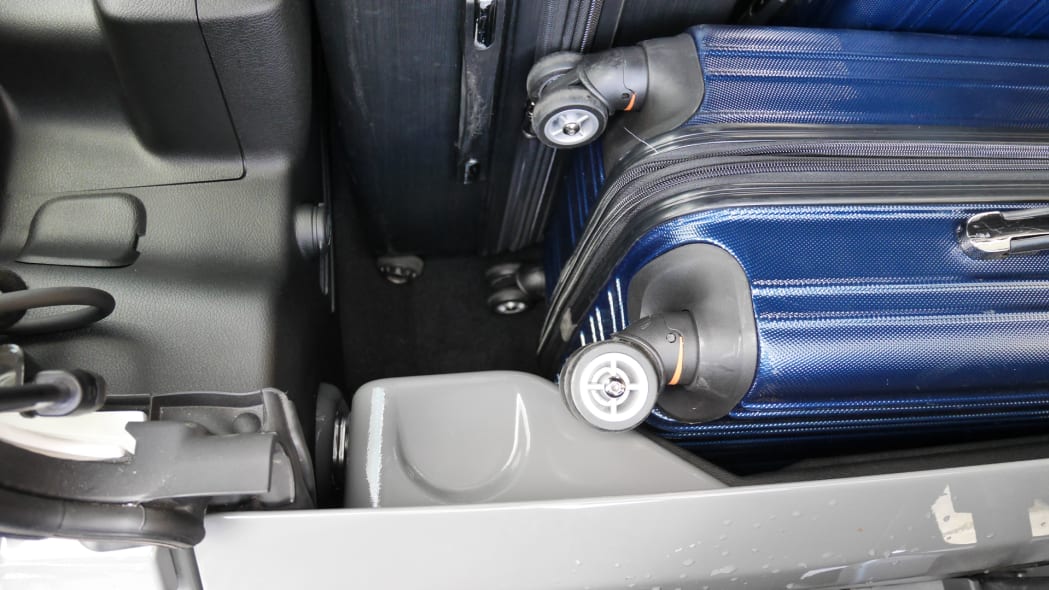 Now, in this formation, everything fit far more easily. 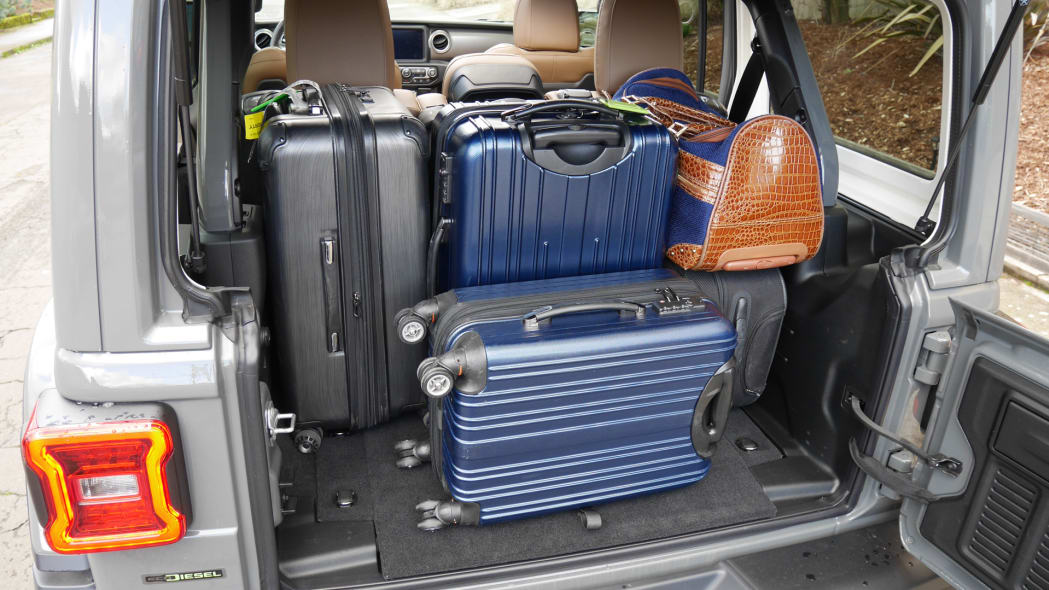 However, it's not fully taking advantage of available space. If it looks like fancy bag will fit laterally between the roof pillars ... 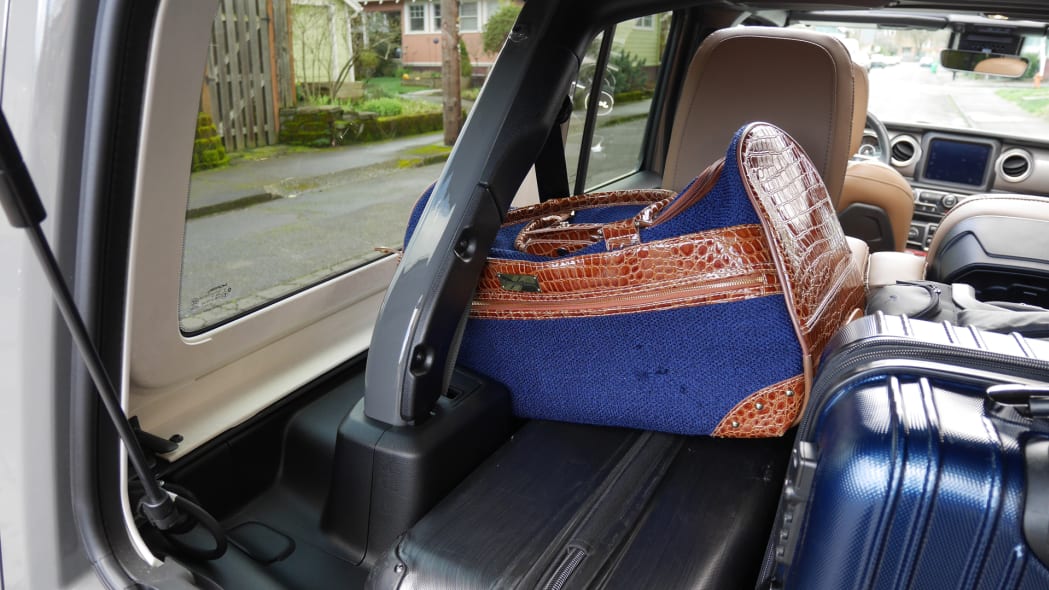 ... It will! As such, that's going to free up some space for other stuff. Let's go to the bonus outdoor activity equipment bin. 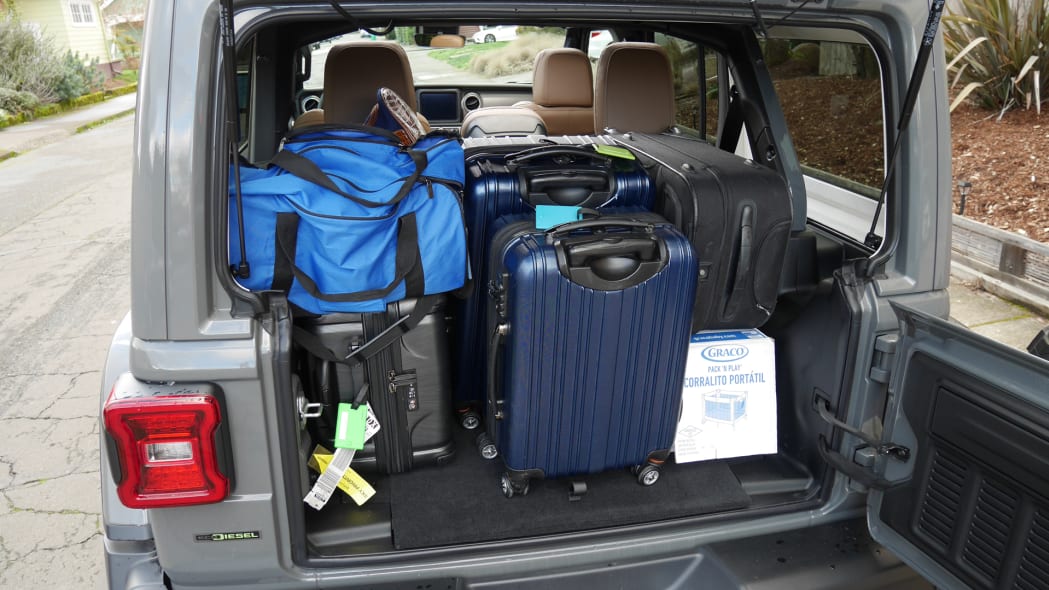 So there you have it, this is close to max. This is all the regular luggage plus a Graco Pack 'N Play and a small duffel bag. Note that the smallest roller is standing upright against the gate, which is a first for these tests. Again, keep in mind the amount of space that had to be left vacant for the gate mechanisms. In total, far less than the Toyota 4Runner, but still pretty good.

It should also be noted that all of these bags just go to the top of the seat backs. Your visibility is unencumbered, and nothing's going to fly forward into the cabin. For the record, the Jeep Grand Cherokee has 36.3 cubic feet of space behind the back seat, but given that boxy is better, I'd wager that the Wrangler Unlimited can hold as much or more.

$1,501 - $2,716 Nat'l avg. savings off MSRP
See Local Pricing
I'm not in the market for a vehicle at this time. Please move this suggestion to the side for 30 days.
Huge Savings