Two for 2: BMW 2 Series Gran Coupe revealed in that many variants

Every version has all-wheel-drive

We weren't expecting the 2020 BMW 2 Series Gran Coupe to be revealed until closer to the L.A. Auto Show, but here we are about a month away with the official photos and info.

We should start off with the looks of the first four-door 2 Series to reach our shores. It looks like a sort of shrunken, stubby rendition of the elegant 8 Series Gran Coupe. The front fascia looks suitably aggressive with chiseled headlights and large air intakes on what the badging reveals to be the M235i trim. The car also has the Gran Coupe line's signature long greenhouse, and the rear has a typical BMW lip and slim wide taillights that help obscure the car's tall, narrow shape. But the model's small-car nature still shows up in the proportionally tall roofline and its short nose and tail. Also worth noting is the lack of detailing or vents on the sides as well as no clear Hofmeister Kink, a long-standing BMW styling cue. And of course, the proportions reveal that this BMW has a transverse engine and front-drive-based chassis, unlike the 2 Series coupe.

There are two transverse engines available in the 2 Series Gran Coupe. The first powers the 228i xDrive and is a turbocharged 2.0-liter inline-four making 228 horsepower and 258 pound-feet of torque that will get the 228i to 60 mph in 6 seconds on the way to a maximum top speed of 151 mph with performance tires. It's coupled to an eight-speed automatic and all-wheel drive, just like all 2 Series Gran Coupe models, and the all-wheel-drive system is front-drive biased, but can distribute up to 50% of power to either axle. The other engine comes in the M235i xDrive and is a modified turbocharged 2.0-liter engine with a bigger turbo, beefier internals and extra engine radiators. It makes 301 horsepower and 332 pound-feet of torque, and it can propel the M235i to 60 mph in 4.7 seconds on the way to a top speed of 155 mph. With the M Performance Package, it can do the sprint to 60 mph in 4.6 seconds. 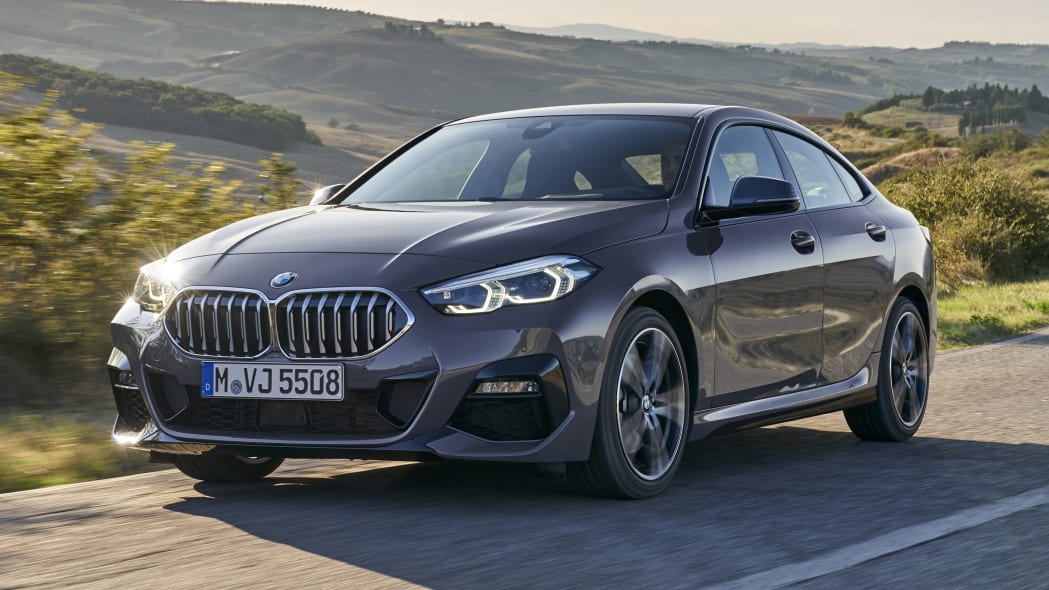 The M235i gets a few extra enhancements over the regular 228i besides the extra power. The eight-speed transmission gets an oil cooler, and a mechanical limited-slip differential is used up front rather than the standard brake-based limited-slip differential. A shock tower brace and subframe brace are added as well. The suspension is retuned and gives the car a ride height one centimeter lower than the 228i. The M235i gets better brakes, too, which can be added to the 228i as an extra-cost option. Both cars can also be fitted with a dual-mode suspension as an option.

The interior is pretty typical BMW with subdued colors and designs, but BMW has given it some flair in the form of ambient lighting. There are sections of the dash and doors that have cross-hatched patterns that emit whatever color of light you prefer. The car also comes standard with physical instrument dials and an 8.8-inch infotainment screen. There's also an optional 10.25-inch infotainment screen that can be augmented with an optional 10.25-inch instrument display and an optional 9.2-inch color head-up display.

Both versions of the BMW 2 Series Gran Coupe will go into production this November with cars reaching dealers in early 2020. Pricing has not been announced yet, but we expect the base price to be between $35,000 and $45,000.