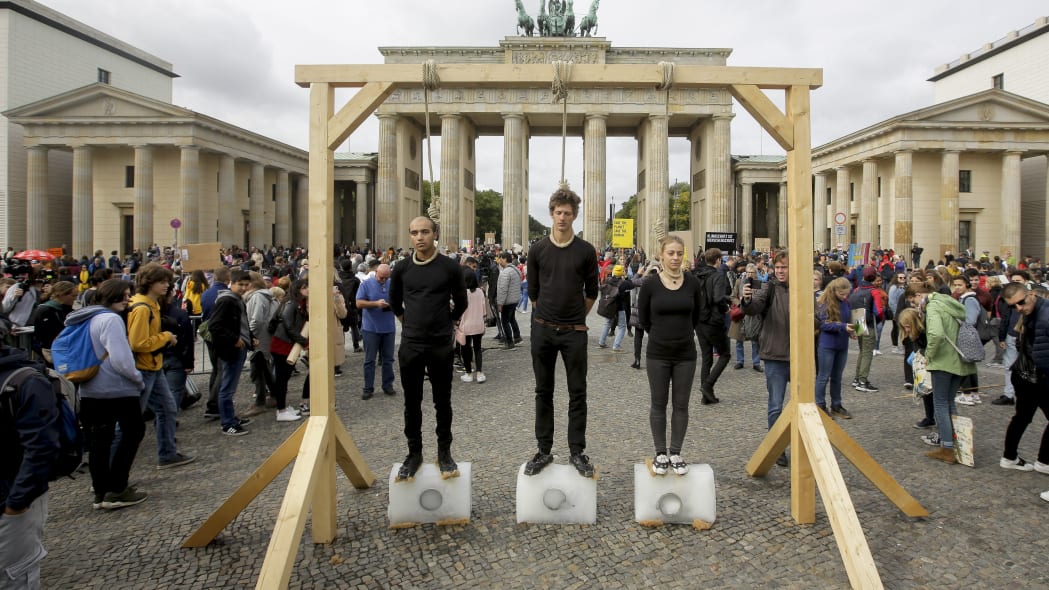 BERLIN — Under pressure from environmental protests and growing support for the opposition Green party, the German government agreed Friday on a 54 billion euro ($60 billion) package of measures for tackling climate change.

German Chancellor Angela Merkel said the deal hammered out by governing parties during marathon talks overnight would boost the country's contribution to fighting global warming. Europe's biggest economy aims to cut its greenhouse emissions by 55% by 2030 compared with 1990 levels.

"We believe that we can achieve the goals and that we've truly laid the foundations for this," Merkel told reporters in Berlin.

But Ottmar Edenhofer, one of Merkel's top climate advisers, slammed the proposals and accused the government of "political faintheartedness."

Edenhofer, who heads the Potsdam Institute for Climate Impact Research, said the planned charge for carbon emissions from transport and heating fuels — starting at 10 euros ($11.07) per ton of carbon dioxide in 2021, and rising to 35 euros ($38.73) in 2025 — was too low to be effective.

According to the Paris-based Organization for Economic Development and Cooperation, OECD, an effective tax on fuels that reflects the climate costs of carbon emissions would need to be above 30 euros per ton of CO2.

A poll released Friday showed 63% of voters saying the government should prioritize climate protection over economic growth. Only 24% said growth should take priority.

Aside from the carbon pricing, the government's new plan envisages substantial subsidies for consumers who buy cleaner cars and home furnaces. The installation of oil furnaces will be banned entirely from 2026.

Other measures agreed to include raising the climate charge on airline tickets and investing more in low-emission rail travel, including by reducing the tax on train tickets.

Environmental campaigners accused Merkel of surrendering to the interests of Germany's powerful automaker lobby by failing to set a deadline for phasing out internal combustion engines as some other countries have already done.

Germany has long been a leader on environmental protection, but in recent years it has fallen behind many European neighbors in part due to persistently high emissions in the transport sector."We think this is a huge mistake, including for the industry itself," said Martin Kaiser, the executive director of Greenpeace Germany. "Because adjusting to the global market means ending the burning of gasoline and getting into electric mobility."

The government's cautious climate policy contrasts with the view among most German voters that curbing global warming is the most pressing issue of the day.

"We had minimal expectations, and still we were disappointed," the youth campaign group Fridays for Future said

German students have embraced Swedish teenager activist Greta Thunberg's weekly protests, and on Friday they staged rallies in hundreds of cities across the country. According to police, more than 100,000 people gathered in front of Berlin's landmark Brandenburg Gate — with organizers claiming 1.4 million nationwide — as Merkel outlined her plans nearby.

Merkel acknowledged the pressure her government has come under from protesters, saying young people were justified in demanding "that we do something so they, too, have good chances in life."

"We had minimal expectations, and still we were disappointed," the youth campaign group Fridays for Future said in a statement. It criticized the government for failing to bring forward the 2038 deadline for phasing out the use of coal, one of the most polluting fossil fuels, and calling the plan a "declaration of bankruptcy."

Merkel, a trained physicist, said she agreed with Thunberg that was time to "unite behind the science" and there was no point in denying the evidence for global warming. But she also admitted that the climate plan was a compromise.

"Politics is (doing) what's possible, and we explored those possibilities," Merkel said.

Germany's climate policy is being closely watched elsewhere. The country has the sixth biggest greenhouse gas emissions in the world, with a 2.1% share of the global total.

Merkel, who was environment minister during the first United Nations climate conference in 1995, said she plans to tell fellow world leaders at a U.N. summit in New York on Monday that Germany stands by its long-term goal of cutting emissions to net zero by 2050.

But she admitted that her government can't guarantee the latest plan will achieve the 2030 target, let alone the more ambitious long-term goal.

'I want to grow up. I want to have a future': Climate protesters worldwide demand action

NEW YORK — Young people afraid for their futures protested around the globe Friday to implore leaders to tackle climate change, turning out by the hundreds of thousands to insist that the warming world can't wait for action.

Marches, rallies and demonstrations were held from Canberra to Kabul and Cape Town to New York, and German police reported that more than 100,000 turned out in Berlin. The "Global Climate Strike" marches came days before a U.N. climate summit of world leaders.

"Basically, our earth is dying, and if we don't do something about it, we die," said A.J. Conermann, a 15-year old high school sophomore among several thousand who marched to the Capitol building in Washington.

"I want to grow up. I want to have a future," Conermann added.

"They have this opportunity to do something, and they should take that," Greta Thunberg said of world leaders. "And otherwise, they should feel ashamed."

And in Paris, teenagers and kids as young as 10 traded classrooms for the streets. Marie-Lou Sahai, 15, skipped school because "the only way to make people listen is to protest."

The demonstrations were partly inspired by the activism of Swedish teenager Greta Thunberg, who has staged weekly "Fridays for Future" demonstrations for a year, urging world leaders to step up efforts against climate change.

"It's such a victory," Thunberg told The Associated Press in an interview in New York. "I would never have predicted or believed that this was going to happen, and so fast — and only in 15 months."

Thunberg spoke at a rally later Friday and is expected to participate in a U.N. Youth Climate Summit on Saturday and speak at the U.N. Climate Action Summit with global leaders on Monday.

"They have this opportunity to do something, and they should take that," she said. "And otherwise, they should feel ashamed."

New York protester Pearl Seidman, 13, hoped the demonstration would tell the Trump administration "that if they can't be adults, we're going to be adults. Because someone needs to do it." At least one Trump supporter waved a large "Trump 2020" flag as the demonstrators marched in Manhattan.

In Florida, high school students shouted "Miami is under attack" in Miami Beach, where some worried about losing their homes to rising water. On the West Coast, student-led protests drew in some Google and Amazon employees.

Amazon, which ships more than 10 billion items a year, vowed Thursday to cut its use of fossil fuels, and Google CEO Sundar Pichai told the Financial Times in a story published Friday that eliminating the company's carbon emissions by 2030 didn't seem "unreasonable."

Friday's demonstrations started in Australia, where organizers estimated 300,000 protesters marched in 110 towns and cities, including Sydney and the national capital, Canberra. Demonstrators called for their country, the world's largest exporter of coal and liquid natural gas, to take more drastic action to reduce greenhouse gas emissions.

Thousands of schoolchildren and their adult supporters demonstrated in London outside the British Parliament. The British government said it endorsed the protesters' message but didn't condone skipping school — a stance that didn't sit well with some of the young protesters.

"If politicians were taking the appropriate action we need and had been taking this action a long time ago when it was recognized the world was changing in a negative way, then I would not have to be skipping school," said Jessica Ahmed, a 16-year-old London student.