It could theoretically cut down on design development times

Zac Palmer
The Ford Design Studio wants to change the way it designs cars. Traditional paper, pens and pencils: they're out. To that effect, today it's announcing a partnership with a UK company called Gravity Sketch. This company provides Ford a 3-D virtual reality tool for designers to use, and we got a chance at trying it out ourselves.

This setup is similar to those available to the public, using an HTC Vive headset and controllers for the design process. The big benefit to designers and engineers is the ability to conceptualize and draw in 3-D from the beginning. Michael Smith, Ford design manager, tells us it's massively helpful in knowing whether a design looks good right away. There's a big difference between sketching a design in 2-D on paper and looking at a design from every angle right as you're drawing it.

The traditional design process takes weeks to get to this 3-D rendering. By using Gravity Sketch right away, Ford is able to theoretically cut down the time it takes from going from concept to finished design. As of now, Ford still considers this project to be in the feasibility stages. It hasn't actually used this to design any cars or specific parts for any production cars you can see today.

If the project is ultimately greenlit, Smith believes it can greatly reduce the time it takes for Ford to design a car. The transition — a 2-D sketch to computer illustration to 3-D rendering — takes weeks. This method brings the designers directly to the 3-D rendering portion of the process. Engineers can pop in and say this or that won't work right as the designer is drawing a line. 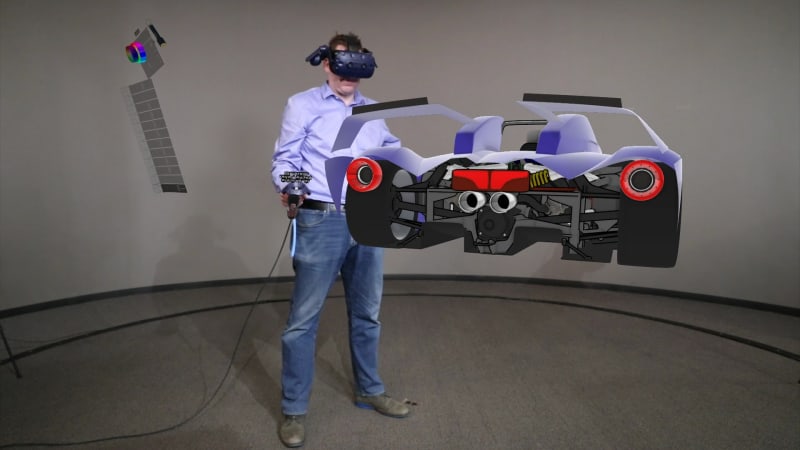 So does it work? We aren't professional car designers ourselves, but using the tool was undeniably cool and easy. You can draw straight lines, curves and surfaces with ease. I was able to pick up a lot of the basics in a short 20-minute learning session — Smith says most designers take about eight hours to get the program down. I "sat" in the cockpit of a barren interior and was able to place all the car's controls around me in a natural way. Think steering wheel, infotainment screen, vents etc.

The most shocking part of the experience has to be the realization that it's all in 3-D. You can walk around the room and see your creation from different angles; hop into the passenger seat and see what your design looks like from over there. And if you don't like the way something is looking, just quickly delete it and continue to render again.

Ultimately, everybody wants more beautiful cars. Ford wants to cut development times, too. Smith believes that is entirely possible with this process of designing. It doesn't hurt that designing cars this way is incredibly fun to boot. We'll be keeping tabs on this one to see if and when Ford finally designs a car from start to finish without a single piece of paper or pen.