Design as a palate cleanser for complicated technologies.

Infiniti's new Q Inspiration concept is a striking fastback sedan that the company says reflects an inflection point for both the luxury brand and the broader auto industry itself. It represents a bridge between technologies.

But it's also true for the concept car's design, which Infiniti says provides a simple, elegant solution to complex technological questions — offering a palate cleanser, if you will, for the complicated technologies hidden beneath the gleaming surfaces. Oddly enough, the futuristic-looking Q Inspiration owes a debt of gratitude to the Prototype 9, the concept based on a 1940s-style grand prix car that Infiniti released last year. Alfonso Albaisa, Infiniti's senior vice president for global design, said that project became "a kind of a blank canvas for us to play with" and allowed for new discovery and expression with minimal brush strokes. It also led designers back to Ma, the Japanese concept of mastery of empty space.

We spoke with Albaisa about how the concept's design echoes the theme of bridging the present and future.

1. The cabin's forward proportion and roominess 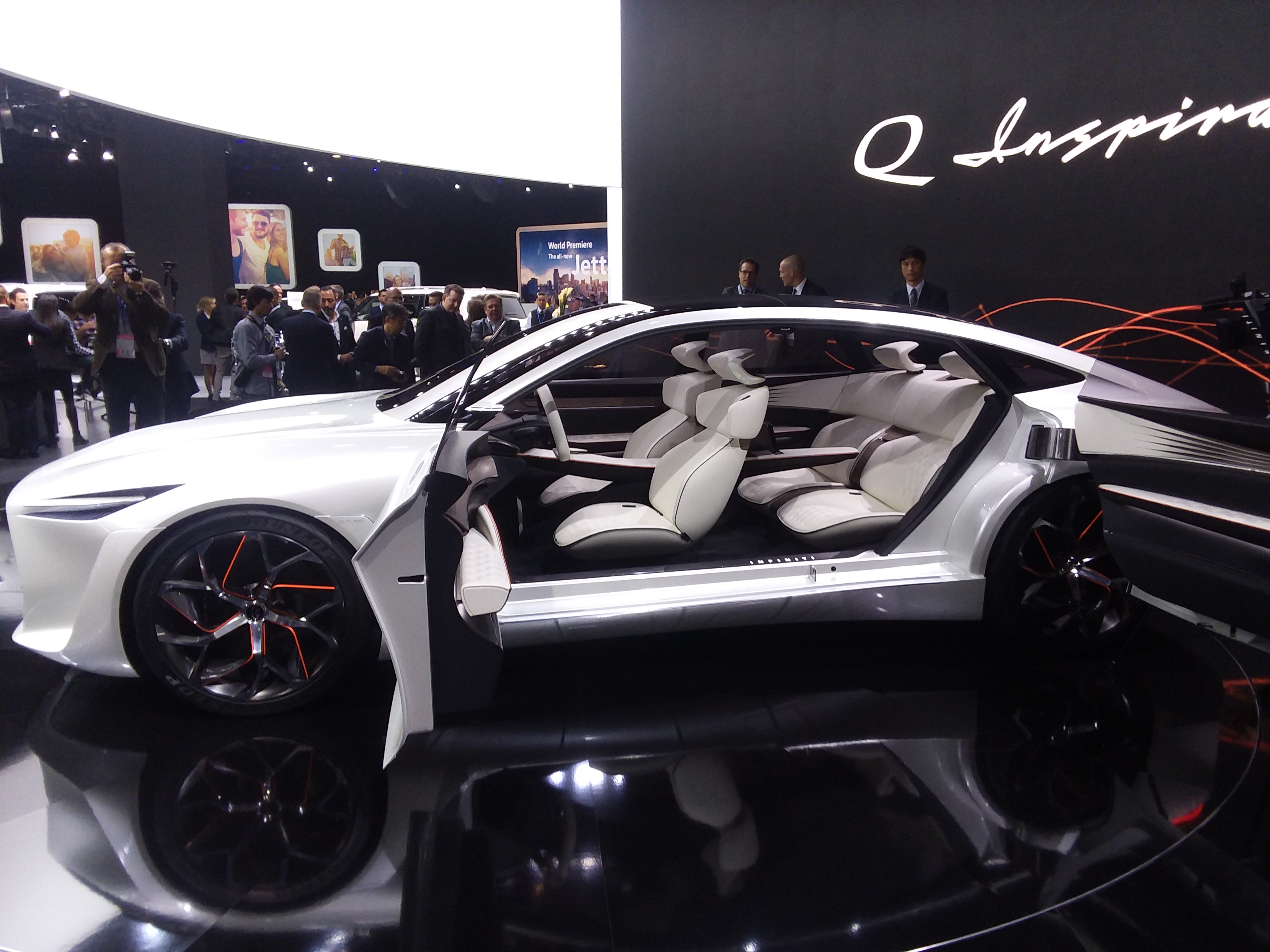 Using the space-efficient VC-Turbo engine gave the designers space to shift the cabin forward and move the A-pillars back, creating a more centered and elongated cabin, with maximum headroom. The interior is clean, with orange and black leather with orange accents and backlit birch wood accents. The center console is floating, providing seamless connectivity to technology and hiding mechanical elements. Albaisa says it's the first manifestation of Infiniti's new form language for an era of advanced powertrain and future technologies. 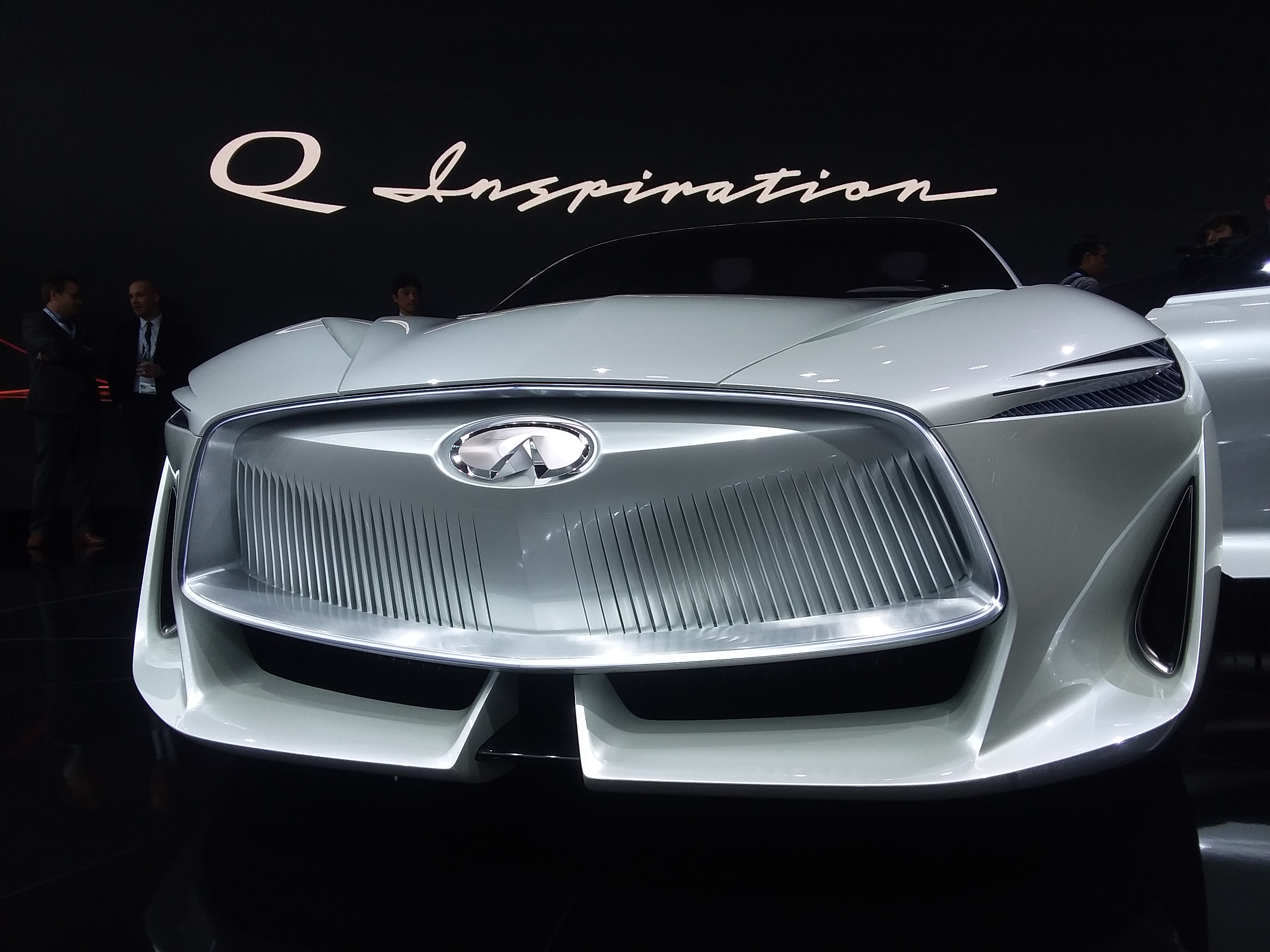 In what Albaisa describes as "a little bit of an accident" and "kind of tongue-in-cheek," the Q Inspiration's grille is a kind of trompe l'oeuil phenomenon. From directly in front, you can see the small fins, but viewed from the side, they disappear. So much so that Albaisa said he was initially fooled.

"From a functional point of view, we need to breathe," he said. "But I think in the future, where there'll be a lot different types of technology, probably the car can breathe less. So we don't need that dominating big open mouth. We can have this sense of the closed (mouth)." 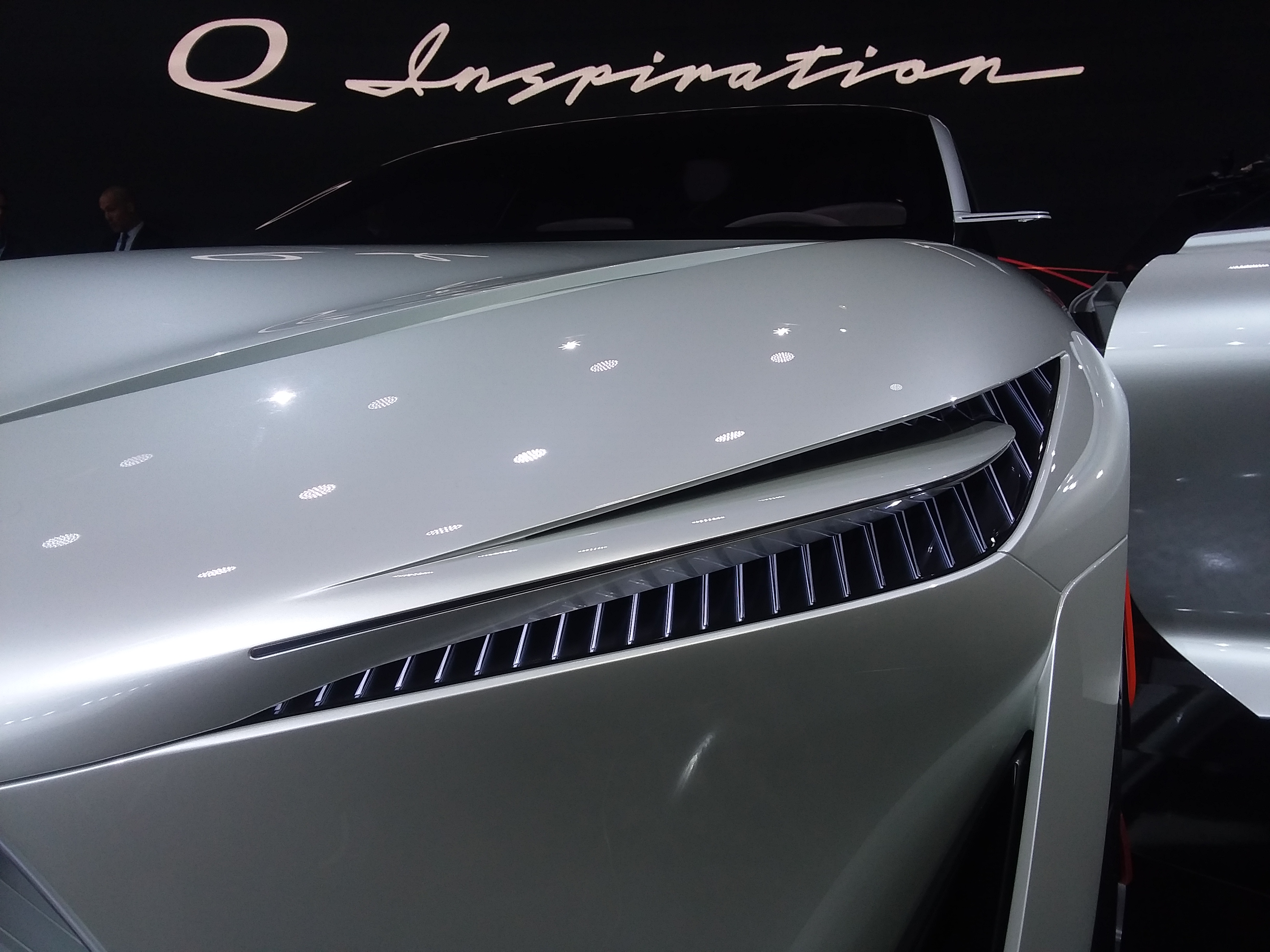 The Q Inspiration uses powerful LEDs, hidden in the body, with advanced reflective technology to deepen the view of them and give them a very narrow profile.

"The lamps themselves almost look like no lamps. Just a hole in the (metal)," Albaisa said. "Because for me, artistically, I want no decoration from the car. There's no headlamp, there's just light when you need light."

Designers used chrome in the grille, but they mounted its broad side in depth, so from a straight-ahead angle, you see only a narrow chrome ribbon. "It's just an edge line on the fuselage. And then everything pulls away, and there's very romantic round things."

Infiniti has no plans to put this concept into production, but Albaisa said the Q Inspiration's swooping spine, which starts in the rear, reaches its strongest expression in door creases before rounding out along the front fender, offers clues to future design flourishes in production vehicles.

"Generally we feel that in the world of these technologies there's so much happening, like these screens," Albaisa said. "So much stuff there. We don't need to add things. We are going intentionally much more simple with the main read so that we can then draw attention to the graphic user interfaces and all of this stuff."