FRANKFURT, Germany — We learned some interesting facts from Mercedes-AMG's CEO Tobias Moers at the Frankfurt Motor Show about the Project One. While the machine boasts a comprehensive suite of active aerodynamic technology from adjustable spoilers to opening vents, the right and left sides of the Project One can't operate independently of each other.

As you may remember, the Lamborghini Huracán Performante's party pieces are vents that adjust the amount of downforce applied to either the left or right side. This helps keep the car level in corners, and it likely contributed to the Lambo's wickedly fast Nürburgring lap time. The astonishing Project One will not take advantage of a similar system.

Moers told us he didn't see an advantage to such a variable system. He feels that having downforce is vital right from the moment of turn-in, and adjusting downforce left and right can't be done quickly enough to make a difference at corner entry. And there's no way to predictively adjust aero to prepare for a corner, at least not at this point in time. That being said, Lamborghini certainly sees merit and has said there are benefits in high-speed corners and we agree that it makes a difference. 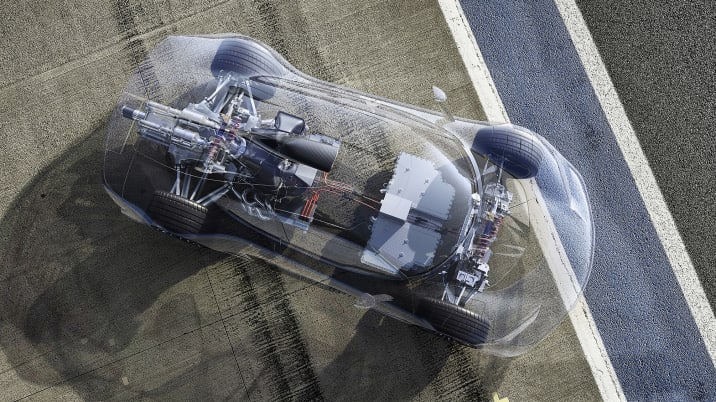 According to Moers, 1,000-horsepower Formula 1 V6 hybrid powertrain wasn't particularly difficult to make durable and reliable enough for daily driving on the streets. He said that the criteria from racing wasn't too far off. One of the primary difficulties was getting the idle down from around 4,000 rpm to a more livable 1,000 rpm. Accessories like air conditioning, which usually require belt-driven compressors from the engine, were taken care of by simply powering them with electricity, something the hybrid will have plenty of.

We also gather that Mercedes will take the car to the 'Ring to set a lap time. Unfortunately, Moers wouldn't give us a target time the company is shooting for. After all, there are still some things to fine tune and prepare before the company starts delivering cars to customers in 2019.

Deciding who gets a Project One is another of the things Mercedes-AMG is still working on. Despite a cost of over $2.5 million, demand is impressively high. Moers told us that about 3-4 times as many people asking to buy one as the total allotment of 275 cars. So if you're not already in line, well, it's probably not gonna happen.