The 2018 BMW 5 Series, the executive sedan's seventh generation, is receiving a so-so reception. Perhaps it's because we've become too blasé about this model, which dates to 1972. That first E12 took the fight to Mercedes-Benz, followed by the 1981 E28 that truly elevated the 5 Series. It was sleek, sophisticated, and cool enough for Jason Bourne to steal.

Somehow cool deserted the latest model, which is billed as an "executive athlete." The 5 Series' transcendence is defined by touchscreen wizardry, self-driving proficiency, and business efficiency. Perhaps the antidote is the M550i xDrive. We tested it in the heartland of Bavaria on roads around the elbow of the German Alps known as Berchtesgaden, a beautiful if precipitous part of the world. These days it's a stunning national park, but in darker times was also the site of Hitler's World War II Eagle's Nest hideaway.

Oh and it snowed. So much late-season snow that organizers rushed out to secure Continental winter tires, which has the effect of pushing road vibration through the frame and dulling corner turn-in. We weren't expecting a nimble drive. This is a beefy muscle sedan that weighs 4,372 pounds. It's powered by a 4.4-liter, short-stroke twin-turbo V8 with direct injection and variable valve lift. It produces 456 horsepower at 5,500 rpm and 480 pound-feet of torque running from 1,800 to 4,750 rpm. Even at 6,500 rpm where redline is within sight, hammering the throttle is rewarding, as are sprints to 60 achieved in 3.9 seconds. 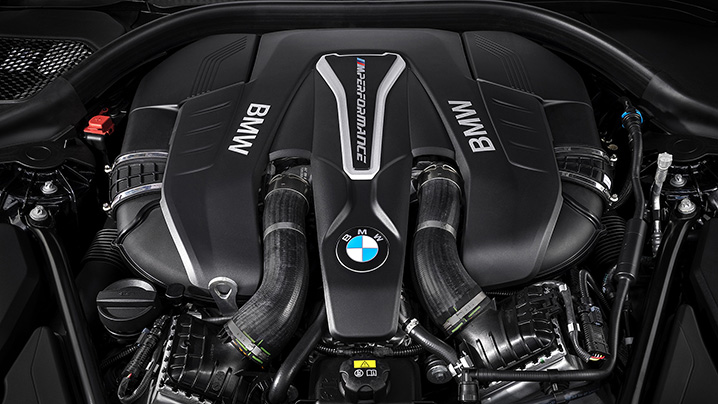 The longitudinally-mounted V8 feeds into a ZF eight-speed torque-converter automatic transmission. It features a special set of ratios and an electronically controlled Haldex-type clutch pack sending power to the front wheels when slip is detected or anticipated, but the system defaults to a rear-wheel bias.

The wheels are standard 19-inchers with 20-inch rims optional. On its M-Sport suspension with active-roll stabilization the 550i runs 0.4 inches lower than the conventional sedan, which gives it a tough appearance. The bodywork is kept largely standard, but blue brake calipers, big lower front air intakes, black chrome exhaust snaps, and mirror cappings give it subtle aggression. Inside are sporty seats, aluminum foot pedals, and illuminated sill plates and trim strips.

Transmission control is via BMW's tunnel-mounted lever or more conveniently, through the steering-column paddles. There are several driver settings for the transmission that modulate throttle mapping, steering weight, and suspension roll control and damping. Sport and Sport + are at the extreme, the latter relaxing the dynamic stability control to allow gentle tail-out driving.

Startup is a purposeful growl that turns into a posse of angry neighbors banging on your door. The aggressive awakening contrasts with the powertrain's docile nature around town. The suspension is supple and forgiving, although the tires are loud over potholes and surface changes. Those winter boots also set up a fizzing vibration through the steering. 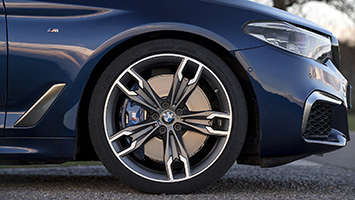 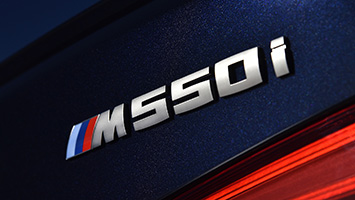 Speed up and that huge engine dominates the experience. Despite the curb weight, acceleration gathers inexorably like an approaching storm. The ZF transmission changes gears smoothly or quickly depending on what you've dialed in, and it loves being manually short-shifted around 4,500 rpm, where it feels like an unstoppable force.

Overdrive it and there's a real sense of being trapped on a runaway train, with the body control remaining loose and rangy whatever the suspension setting. This is a big car, more than six feet wide, so you need to accurately place it on all but the widest roads. On narrow streets, especially those with undulating surfaces, there's a jouncing, wriggling quality to the ride that leaves you feeling as if never quite in control. Nothing wrong with the wishbone front and five-link rear suspensions, and the body-roll control works well, so some of feeling could be down to those winter tires. Yet, other BMW models carry all-weather rubber without throwing most of their high speed driving quality out the window. Additionally, those sporty seats aren't particularly comfortable after an hour behind the wheel. 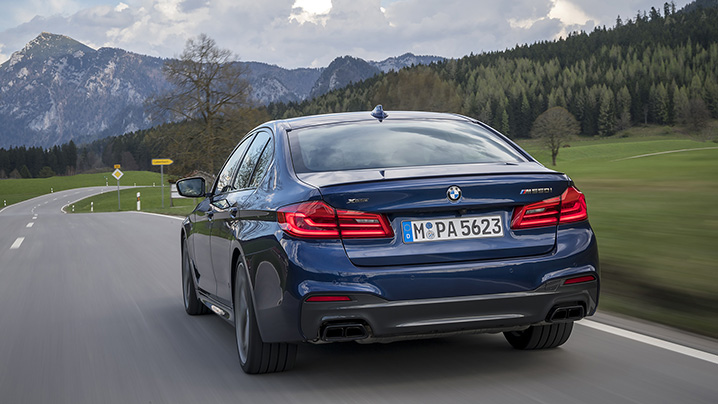 Worse, where the 3 Series steering aids like lane-keeping assistance can be simply turned off via dashboard switches, turning off these steering corrupters on the 5 Series requires some digital cave diving at least three levels down from the main screen, which is simply unacceptable in a sedan with M badging.

Thankfully the big four-piston caliper front disc brakes haul the car up swiftly and without drama, although the cheap single-piston swinging caliper rear brakes seem like cost cutting on a car of this price with this much power.

If you want lazy power and relaxed long distance cruising with a sledge hammer under the hood just in case, then this might be the car for you. But for those who like their driving, the Mercedes-AMG end of the E-Class brochure makes a more convincing case for itself – even the V6-powered E43 AMG. Either that or wait for the M5, which can't be anything but an improvement on this. If the 5 Series is blasé, the 550i xDrive M Performance is actually disappointing.