Solid. Attractive. But maybe not all that efficient.

Honda waited until the Accord Hybrid was on sale for an entire month before inviting journalists out for a test drive. Usually, these events are previews, a chance for those in the industry to get an advance feel for what's about to go on sale. Not this time. The new 2017 Honda Accord Hybrid has been available at your local dealer for a month now. It's high time we got caught up.

We were able to do just that at a drive event in Napa Valley last week. We can't say that the new Accord was a hoot to drive, but an Accord isn't supposed to be thrilling. It's supposed to sell boatloads of units a year, and that's why a hybrid version is so important. With ever-increasing fuel-efficiency standards coming around the world and an uncertain future when it comes to gas prices, having a car like this in the stable is obviously important. Of course, the future is only one side of the coin. As we said, the Accord Hybrid is on sale now, in a time of relatively low gas prices in the US, where sedan sales are being outpaced by CUV and SUV sales. This is the reality that the Accord Hybrid is facing.

Honda, though, is confident. Just how good does the automaker think the new Accord Hybrid is? We'll guess about twice as good. That's because Honda execs said they expect to sell about 30,000 units a year, about double the volume of the 2014 Accord Hybrid. That's the official sales plan, anyway. The car went on sale June 15, 2016, so we're already off to the races. Sure, only 31 Accord Hybrids were sold in the second half of June, but we can't draw any conclusions this early in the process. Without a doubt, 30,000 sales is respectable for a hybrid (Toyota sold 30,640 Camry Hybrids in 2015), but let's just note for the record that Honda sold 355,557 Accords last year. If it manages to sell 30,000 Hybrids a year, and Accord sales numbers remain stable, that'll be just 8.4 percent of the overall total. 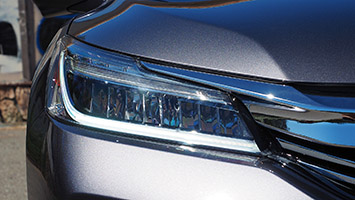 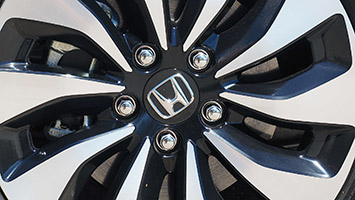 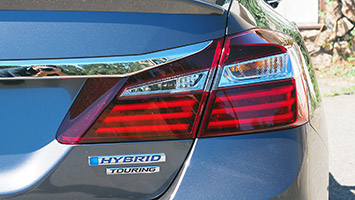 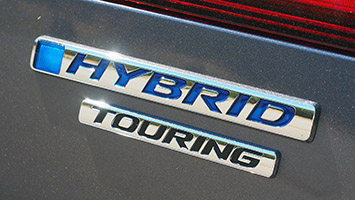 The car should easily appeal to 30,000 buyers a year. The clean and attractive exterior design hasn't been massively overhauled from the 2014 Accord Hybrid, but why change what isn't broken? The headlights are updated, the front fascia has sharper lines, the taillights are more impressive – and that's about it. Inside, the addition of Apple CarPlay and Android Auto are appreciated, the presence of Lanewatch remains a fave, and the now-standard HondaSensing safety suite (which includes things like lane-keep assist, road-departure mitigation, and adaptive cruise control) is going to make a lot of people feel better about buying this gas-electric Accord. Since there will not be a plug-in hybrid version of the Accord this time around - that role is being filled by the upcoming Clarity PHEV, which will arrive in 2018 - if you want the greenest Accord, this is your baby.

Under the hood we find Honda's next-generation two-motor hybrid system (an evolution of the system first used in the 2014 Accord Hybrid). This powertrain uses a 2.0-liter, Atkinson-cycle, DOHC, I-VTEC engine and two electric motors to offer 212 total system horsepower, good for EPA ratings of 49 city, 47 highway, and 48 combined miles per gallon. Honda says these are all best-in-segment numbers. (You may be thinking, "Wait, didn't the 2014 Accord Hybrid get 50 mpg?" That's true, but the EPA changed has changed its tests since then; if you were to use the old test, the new model would match or exceed the earlier vehicle in all three categories). 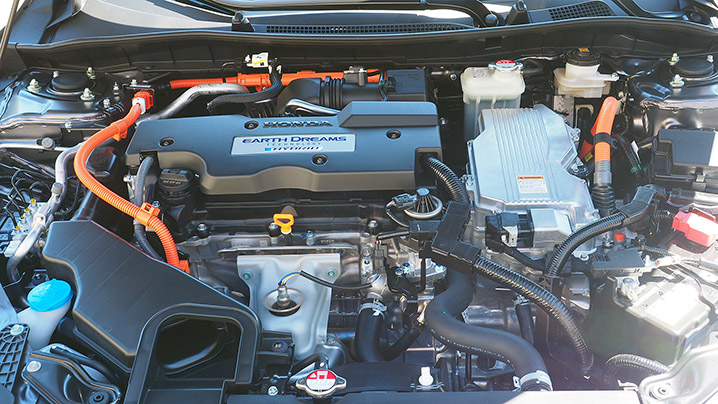 Of course, impressive-on-paper test results are available all over the place, and what matters is how the car operates in the real world. This is where Honda might run into some problems. On a relaxed 40-mile highway jaunt, we saw just 42.7 mpg on the display, and when we whipped the hybrid through the Napa Valley hills, we were under 40 mpg almost the whole time, hitting 35 mpg or so on the screen towards the end of a 20-mile route. How these early results stand up to the experiences of 30,000 daily drivers will be something we will be watching quite carefully in the months to come.

Enough about the specs. We went to Napa Valley to drive, so let's get to that. Overall, we remained un-thrilled, but that's not to say this isn't a solid hybrid sedan. On the highway, the car was smooth and quiet, and people who buy it for their daily commute will be entirely pleased with their purchase. Pushing the Accord Hybrid a bit around corners, it felt heavy in the back. Not too heavy, mind, but just not light, and you could feel the weight transfer though the seat. The springs could be a bit stiffer as well, but the MacPherson strut suspension up front and multi-link rear kept body roll to easily tolerable levels. Just like in the 2014 model, the steering felt responsive and the brake blending was impressive. In fact, since Honda has increased the amount of regenerative braking the upgraded powertrain can handle, brake feel was even improved. There are lots of little improvements throughout the system. The Intelligent Power Unit is smaller and lighter. The Power Control Unit is smaller and lighter. The motors are, well, you can probably guess. Honda's even added an exhaust heat recovery heating system for just a little bit more efficiency. 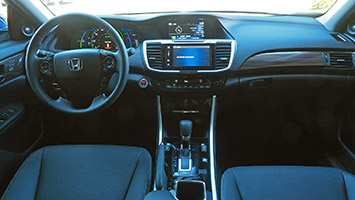 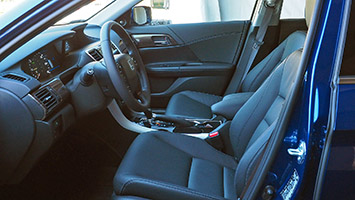 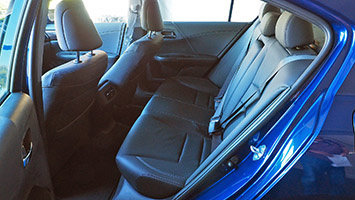 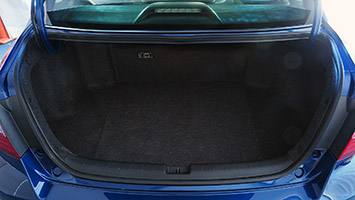 There are three different driving modes in the new Accord Hybrid: EV, Engine, and Hybrid. As the names make clear, each is defined by the power source to move the car (lithium-ion battery, gas engine, or both, respectively). You can push an "EV" button to force EV mode when possible (which is not often) or engage sport mode for slightly more aggressive throttle response, but overall it's best to just let the system choose its power source automatically. Under normal circumstances, this means you'll start off bouncing between EV and hybrid mode and only need pure engine acceleration mode with high-speed passing. It should be noted that when you really step on the gas, the engine whine is almost annoyingly loud. Let the Accord Hybrid be your gentle commuter car, and all will be well. 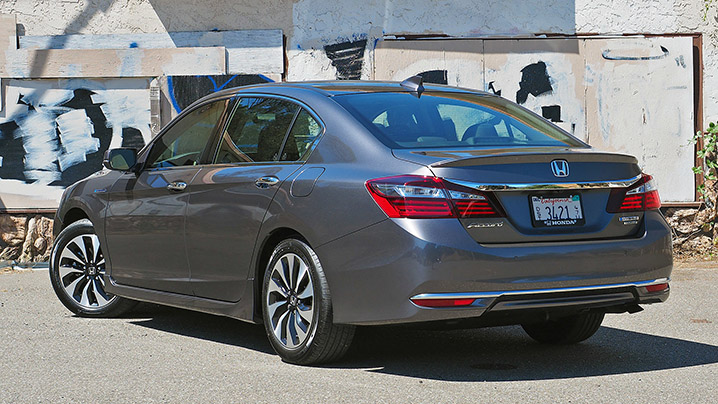 In the end, the Accord Hybrid is a solid, responsible car. Everything (with the possible exception of the stated fuel-economy numbers) works the way it should, but there's nothing particularly amazing going on. Nonetheless, Honda executives at the launch spoke highly about what this car means for the future. Jeff Conrad, Honda senior vice-president and general manager, said that this car is, "planting the flag for future electrification." Jay Guzowski, Honda's senior manager of product planning, said during the launch that the new Hybrid model will play an "integral part" in the overall Accord lineup and also that it is a "key model" in Honda's plans for future electrification. Honda is even saying that two-thirds of all Honda sales globally by 2030 will be electrified (fuel cell, plug-in, or hybrid). That all sounds great, but we heard a lot of the same future bluster at the launch of the 2014 Accord PHEV back in late 2012, and that model only lasted about 18 months in the marketplace. Its underlying powertrain continues to evolve and play a role in Honda's plans, but just because Honda executives are confident about a product does not mean customers will actually buy it.

The 2014 Accord Hybrid was quietly phased out in 2016 after the 2015 model year so that Honda could move production from Ohio to Japan and spend some time improving the powertrain. Now that the 2017 is here, we like what we drove and remain hopeful. There's very little to complain about – actually, nothing serious at all – but the real-time MPG results do give us pause. Whatever the real-world fuel economy of the Accord Hybrid turns out to be, it will for sure be better than the non-hybrid version, which tops out at 30 mpg combined for the 2.4-liter, four-cylinder with the CVT. You could say that the fuel-economy bump costs $7,250, but that's not entirely accurate. We tried to match the feature set of the base level Accord Hybrid with a standard gas-only model, the closest we could spec ended up with an MSRP of $25,292 (we added HondaSensing for $1,000, LED Fog Lights for $439, Remote Engine Start System II for $399, and a Decklid Spoiler for $299). This misses out on the 17-inch Alloy wheels, Apple CarPlay/Android Auto, and LaneWatch, among other cool features. Still, the base Accord starts at $22,355, while the lowest Hybrid trim starts at $29,605. Calculating out the ins and outs of whether spending the extra money now to use less gas later will be the subject of at least 30,000 discussions in the coming year. At least, that's what Honda's counting on.