This must be the sauciest Morgan to ever leave the company's Pickersleigh Road works.

Andrew English
View All Specs
There are two rows of 29 immaculately hand-formed louvers down the length of the Morgan Plus 4's bonnet. You line them up for the turns a bit like aiming a twin-barrel Bofors anti aircraft gun. This Thirties designed sports car made of steel, aluminum, wood and leather picks a bar fight with every black-top bump and ripple. Here's an idea: Why not give this car, with its antediluvian sliding-pillar front suspension, 46-percent more power by shoe-horning in a Cosworth-tuned Ford Duratec 2.0-liter four pot, which red lines at – wait for it – 8,000 rpm. Has any Morgan ever screamed as hard as this?


Has any Morgan ever screamed as hard as this?

This must be the sauciest Morgan to ever leave the company's Pickersleigh Road works. The factory is in the English town of Malvern, where the evening sun colors the building orange as it sets over the eponymous hills. It's rortier even than TOK258, Chris Lawrence's 1962 Le Mans 24-hour class-winning Plus 4, or the extraordinary alcohol-fueled, J.A.P.-engined Aero 3 wheelers for which the company is equally famous.

Cosworth is the 58-year-old engine specialist originally formed by Mike Costin and the late Keith Duckworth and the most successful grand-prix engine maker in history. The Ford Cosworth DFV won 151 grands prix dominating Formula One for over 15 years. Cosworth has modified Ford engines since 1959 and continues that work today with a range of Duratec YD crate engines known in racing circles as a source of reliable outputs ranging from 210 to 280 hp. The Morgan application in two-liter, 225-horsepower form has, as one Morgan engineer put it: "pretty much everything inside thrown away and replaced." 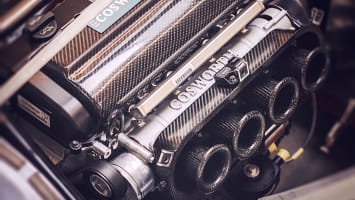 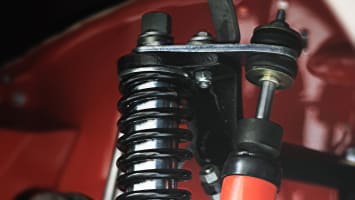 The pistons and connecting rods are forged, with Cosworth's own ring pack and special bearings. The company's bespoke cylinder head assembly is loaded with twin overhead camshafts using Cosworth's Level 2 race profiles. Water and oil pumps are uprated, there's dry-sump lubrication, and at the top end, a roller-barrel throttle assembly and carbon-fiber air box and trumpets. Morgan isn't saying what it paid, but if you rolled up at a Cosworth dealer today, you'd expect to write a check for about $14,000.

Plus 4? It's basically a hopped-up (and most of them are wider-bodied) version of the 4/4, the first four-wheeled Morgan. The 4/4 celebrates its 80th anniversary this year and holds the record for the single car longest in production, though there are plenty of pretenders to this throne. Plus 4 models have been produced less often, starting in 1950 and then reintroduced at various periods since then. There have been changes, but apart from drivetrains, they've been small. A big revolution was the galvanizing of the steel chassis and Cuprinol-protection against wood worm for the ash body frame. Scoff all you want here, but remember the Plus 4 weighs less than 2,200 pounds dry and that gives the engine and the suspension a big leg up when it comes to outrunning virtually anything else on the road.

This car, the ARP4, is a limited run of 50. The Cosworth screamer drives through a Mazda MX-5 transmission into a five-link located, coil-sprung solid rear axle in place of the standard car's leaf springs. There are uprated brakes and brake-cooling ducts in the front, a special air scoop in the bonnet, and Spax adjustable dampers all round. It rides on 16-inch wheels with sticky Yokohama Advan tires and has a special 3.9:1 rear axle for quicker acceleration.

It's not all been smooth sailing, as Morgan managing director Steve Morris explains. "After 107 years of history you can still get caught out," he says. "Some aspects of the build were more difficult than we thought they'd be." 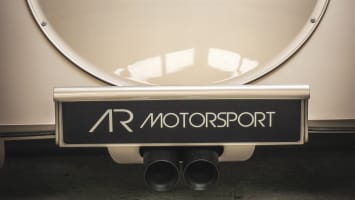 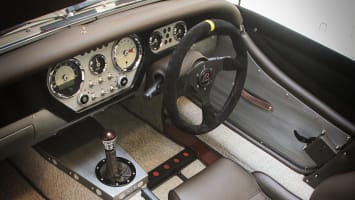 Routing the exhaust was one, and delayed the start of production for this short run of super Morgans. Since Steve had already signed a check for the engines and anything with 'Cosworth' on it is never cheap, he's really happy to see the last of the run being finished in the factory right now. And good for him (if not us), they're all sold.

Did I mention the LED lamps? Horrible aren't they? These are an indication of the trials and tribulations that have affected this ancient family-owned carmaker where sometimes individuals can dictate particular design details. Thankfully these headlamps are a no-cost delete option, and there's evidence that Morgan's design director Jon Wells is gaining enough influence to prevent styling gaffes like these ghastly lights from ever happening again.

Space? Whaddaya mean you want space? There is none in the cockpit, though incredibly there's a rear parcel shelf that will accommodate a couple of small, squashy bags or a small, squashy dog. There's even a glove box, a heater and a heated front windshield, though Morgan is the type of company to brag about something as ubiquitous as inertia-reel seat belts. You'll search in vain for anti-lock brakes or an air bag.


Did I mention the LED lamps? Horrible aren't they?

And then there's the convertible top ("hood" in British parlance). Those used to the simple, single-handed operation of the Mazda Miata canvas should stop reading here. Over-center clips, finger-nail removing fasteners, exfoliating knurled side-screen fasteners, crazed and opaque-prone Plexiglas side windows that resist all attempts to slide open. This is the lot of the Morgan owner. With it erected, you'll get a better view out of a submarine.

You clamber into the Plus 4 like an arthritic limbo dancer, but once inside the leather seats are surprisingly comfortable and the box-weave carpet and drilled aluminum panels prove charming. You are so contiguous with parts of the dashboard and steering wheel that you appear to be wearing it. I didn't much like the illegibly stylized instruments, especially the analogue clock without numerals, but that red line at 8,000 rpm is obvious and tempting.

A fiddly start sequence of flick switches elicits a growly, ill-tempered idle from the Cosworth/Ford and the Mazda transmission slides into first as surely as a foot into a well-worn shoe. There's a bit of transmission shunt and you need to balance the clutch carefully against the engine's lack of flywheel effect; in traffic a stall is only a small slip away. It's surprisingly docile; the Cosworth gurgles, pops, and bangs around town even though there's enough torque to avoid having to row the car along with the gear lever. 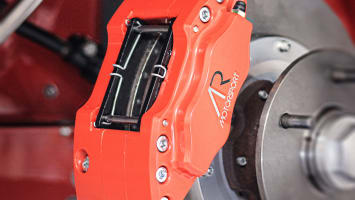 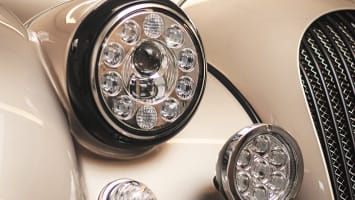 Find yourself a piece of open road, push the revs to about 5,500 and you'll be slightly horrified at just how fast this little car will go. With no official performance figures, we'd estimate 0-60 mph in less than six seconds and a hood-erected top speed of maybe 130 mph. It'll return about 17 mpg, and a lot less if you use it hard. A standard Plus 4 musters equivalents of 7.5 seconds to 60, 118 mph and 33 mpg.

No manicured, primped-up, Symposer-induced sound track here: The Cosworth gives you the raw unvarnished truth straight between the ears as it climbs a mountain of revs. On anything less than cherub-skin smooth surfaces and you're more than busy at wheel. That five-link rear is more honest and refined in its responses than the standard leaf springs, but on a bumpy road it moves around – and so do you.

No one has yet beat a path to Morgan's door for the plan details of its patented sliding-pillar front suspension (though Lancia did use it on the 1922 Lambda), which gives the advantages of a low unsprung weight and largely vertical wheel movements. Trouble is the system also means that wheel camber is directly related to body roll so the tires will pick up their edges on corners unless the anti-roll stiffness is neck snappingly stiff. So it proves on the ARP4, in which the steering is precise, fast, well weighted and the tires grip well. The cost is ride quality, which means those same tires are in the air for a fair proportion of the time. Correcting the subsequent slides is fun and exhilarating, but also exhausting.

Flying close to the ground is a sensation not unappreciated by the typical Morgan owner along with flies in their teeth and windburn. You get all these whether the engine says Cosworth or not. The cost of that name on the cam cover is $77,708 (with the exchange rate at the time of this writing), which is a full $23,545 more than a standard Plus 4. I think it's worth it. What an astounding machine. 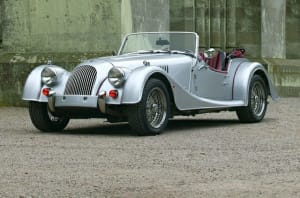