Noah Joseph
Last week Škoda showed off the Fabia pickup concept its apprentices have prepared for the GTI Treffen in Worthersee, Austria. But that's not the only trick the Czech automaker has up its sleeves for the enthusiast gathering. Heck, it's not even the only Fabia-based concept it's prepared this year, joined as it will be by this Fabia Combi R5 rally concept. 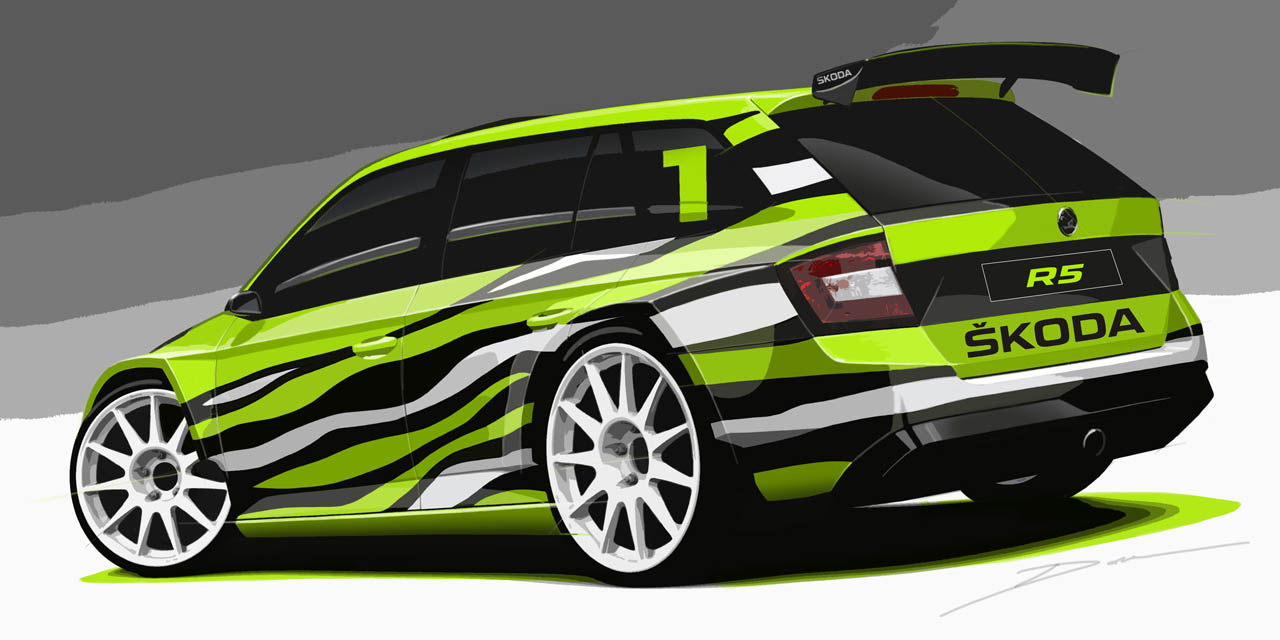 Combining the best attributes of the new Fabia Combi wagon and Fabia R5 rally machine, this concept goes far beyond your typical compact family hauler. It's got bigger air intakes, flared fenders a central exhaust tip poking out the oversized rear bumper and a giant spoiler hanging off the tailgate.

The whole thing is wrapped in an eye-catching green, white and black livery, riding on 19-inch white alloys fitted to a MacPherson strut suspension. Power comes from a 1.6-liter turbo four of unspecified capacity, driving all four wheels through a five-speed sequential gearbox.

Of course there'd be no reason for Škoda to enter a wagon in any competitive rally championship, but then Honda competed in the British Touring Car Championship with a Civic wagon – so we suppose anything's possible.

​Mladá Boleslav, 7 May 2015 – The new ŠKODA Fabia R5 caused a sensation at its first ever race. The ŠKODA team brought home a clear victory from the new model's world premiere in the Šumava Klatovy Rally. The high-tech racer – the ŠKODA Fabia R5 Combi – will be presented as an estate show car at Wörthersee. The world premiere of the design concept will be held at the 34th GTI Meeting at Wörthersee (13 to 16 May 2015). ŠKODA will also be presenting the ŠKODA Fabia R5 alongside three other of the brand's sports cars.

​As many as 200,000 tuning and motorsport enthusiasts will be making the pilgrimage to Wörthersee between 13 and 16 May to indulge in their passion for fast cars. This will be ŠKODA's sixth appearance at the GTI Meeting where the brand will be presenting five sporty models this year.

ŠKODA's designers have reinterpreted the Fabia R5 as an estate model to create the ŠKODA Fabia R5 Combi show car. The green, white and black ŠKODA Fabia R5 Combi will be driving onto the stage on 18-inch alloys. At the front, the powerful bumpers and wide air intake testify to the car's rallying ambitions. The wide contoured grille is finished in back, just as the wing mirror covers. Flared mudguards and powerful doorsills accentuate the model's racy appearance. The rear sports a huge spoiler, as well as a giant rear bumper, and the wide exhaust pipe is positioned in the centre.

ŠKODA will additionally be showing the 'original' ŠKODA Fabia R5 at Wörthersee. Soon after the model's first very successful race, the new rally car will be driving to Wörthersee. At the end of April, ŠKODA's brand new racing car celebrated its dazzling world premiere with a triumphant victory at the opening of this year's Czech Rally Championship. The car driven by the Asia-Pacific Champion Jan Kopecky (CZ) proved to be both fast and reliable. The Fabia R5 is based on ŠKODA's new series-production Fabia, and is the successor to the Fabia Super 2000, which went down as the most successful rally car in ŠKODA's history.