Americans could waste $2.8 trillion being stuck in traffic by 2030 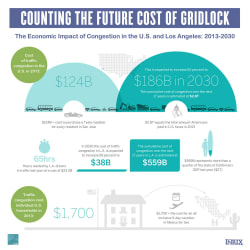 Sitting stopped in congested traffic might be one of the most frustrating feelings imaginable. You're trapped in your car unsure when things might pick up again, when all you really want is to get to your destination. Not only is this exasperating, it might be costing us all a huge pile of money.

A study from the Centre for Economics and Business Research and the company Inrix Inc claims to be the first to assess the "economic and environmental costs of US traffic." It reports that cumulatively between 2013 and 2030 traffic congestion could cost the US $2.8 trillion (graph right).

According to the study's calculations, Americans wasted wasted $124 billion sitting in traffic in 2013 and it cost the average household $1,700. Los Angles drivers had it the worst with $23.2 billion lost, nearly a fifth of the national total. The average drivers sat in 65 hours of traffic during the year. By 2030, the national figure is predicted to increase by about 50 percent to $186 billion squandered in gridlock annually.

Inrix claims that the amounts are based on an analysis of direct costs like people's wasted time and fuel and indirect factors like the higher price of goods that congestion causes. It also predicts there being 30 million more vehicles on the roads over the next 17 years.

The study's conclusion somewhat mirrors another analysis predicting increases in traffic for certain areas around the country. However, other recent evaluations find people to generally be driving less, especially the young.

Inrix is a company that collects driving data and sells transportation inspiration services to automakers and cities. Scroll down to read more about the study it commissioned.
Show full PR text
Americans Will Waste $2.8 Trillion On Traffic By 2030 If Gridlock Persists

KIRKLAND, Wash., Oct. 14, 2014 /PRNewswire/ -- Traffic is actually more detrimental to our wallets than our patience, a new study shows. In 2013, traffic congestion robbed the US economy of $124 billion. Without significant action to alleviate congestion, this cost is expected to increase 50 percent to $186 billion by 2030. The cumulative cost over the 17-year period is projected to be $2.8 trillion – the same amount Americans collectively paid in US taxes last year.

The new report by the Centre for Economics and Business Research (Cebr) and INRIX, Inc., a leading provider of real-time traffic information, transportation analytics and connected driver services, is the first of its kind to quantify the direct impact on drivers in terms of wasted time and fuel as well as indirect costs to US households resulting from businesses passing these same costs on to consumers in the form of higher prices for goods and services.

"The report reveals an ominous forecast for the US if traffic continues to impede the flow of people and commerce to the degree is does today," said Kevin Foreman, INRIX General Manager of GeoAnalytics. "As the economy grows and more people live in urban areas, greater demand is placed on our roads. Until we evolve our approach to how we manage our transportation networks, the individual and societal costs are only going to get worse."

Other key findings of the research include:

As the city with the nation's worst traffic, Los Angeles accounted for nearly 20 percent of the total cost of congestion in the US last year. Gridlock cost LA drivers $23.2 billion in 2013 and is forecasted to grow more than $15 billion to $38.4 billion in 2030.

Population and GDP growth are predicted to drive US increases in traffic congestion, as well as fuel costs and vehicles on the road. The study predicts 281 million vehicles on U.S. roads by 2030 – an increase of 30 million.

"The key to deterring these cost predictions is developing long-term solutions that enable more efficient usage of our roads," Foreman said. "This means creating greater connectivity among vehicles and engineering smarter cities to support this connectivity."

INRIX, which collects real-time data from drivers and devices across four million miles of road in 40 countries, works with leading automakers – such as Ford, Toyota and BMW – and 40 state transportation departments to harness insights that inform intelligent transportation solutions. This INRIX data enables city and state governments to make smarter investment choices in road and transit improvements, informs transportation policy, and powers smart cities applications, including:

Multi-modal navigation services that inform consumers of the fastest mode of transportation to their destination and provide drivers with the ability to navigate the next closest bus or train departure to their destination when traffic or other delays prevent them from completing their trip by car on time.

Building the infrastructure to support autonomous vehicle technology that maximizes throughput by enabling vehicles to all travel at the same speed during peak times.

The report also examined the cost of traffic in the UK, France and Germany, and the most congested cities in each of these nations. INRIX and Cebr will be hosting a Webinar at 11 a.m. ET on Thursday, October 16 where Cebr's lead researcher and INRIX executives share the results of the study in greater detail as well as discuss the implications for industry and government in addressing this growing issue. To download the complete report and sign up for the Webinar, please visit: www.inrix.com/congestioncost.

About INRIX
INRIX is one of the fastest growing big data technology companies in the world. The company leverages big data analytics to reduce the individual, economic and environmental toll of traffic congestion. Through cutting-edge data intelligence and predictive traffic technologies, INRIX helps leading automakers, fleets, governments and news organizations make it easier for drivers to navigate their world. Our vision is simple – to solve traffic, empower drivers, inform planning and enhance commerce.

Whether through an in-car or smartphone navigation application, a local newscast or our INRIX Traffic app, our up-to-the-minute traffic information and other driver services reach more than 150 million drivers to help them save time, fuel and frustration. INRIX delivers traffic and driving-related insight, as well as sophisticated analytical tools and services across six industries covering more than four million miles of road in 40 countries. For more information visit us at www.INRIX.com.

About Cebr
The Centre for Economics and Business Research (Cebr) is an independent consultancy which provides analysis, forecasts and strategic advice to major multinationals, financial institutions, government departments, charities and trade bodies. Since its foundation in 1993 by former CBI and IBM Chief Economist, Professor Douglas McWilliams, Cebr has been 'making business sense' by applying theoretical economics backed by quantitative evidence to real world decisions for private sector firms and public sector organizations. www.Cebr.com.