Driving The Coupe With A Distinct Lack Of F View All Specs
Luxury coupes like this new, 2015 Lexus RC 350 have got, to my mind, a more challenging mission than their all-out-performance variants; in this case, the recently reviewed RC F.

That's not to say that I think actual owners and shoppers of cars like the RC F, BMW M4 and Cadillac CTS-V Coupe only care about output figures and lap times. In fact I'd say that those are outliers in terms of how they get used most often. But the story that we reviewers tell – and that shoppers in the ego-boosted segment tell themselves before they pull the trigger – have a lot to do with what the car is capable of on the edge of its envelope.

Mainstream coupes can't rely on that kind of irrational pull, however, at least outside of the emotional world of styling persuasion. For a buyer to drop more than $40,000 on the RC 350, he or she will want tons of features, comfort, good looks, and, yes, a dash of sportiness to spice of the pot. Reason and desire seem a lot more balanced here. That's great news for Lexus, with its history of creating sensible luxury cars and a pretty composed luxury coupe in this new RC.

Driving Notes There are a lot of very strong components that the RC 350 brings to the table. I think its blending of some sporting character with a good deal of refinement and a strong feature set will play well with Lexus lifers that are looking for a second car or a replacement coupe.

But really, this car and this segment are all about passing the eye test. Those that dig the left-of-center looks of the RC 350 will find more than enough to like about the driving experience. Those that encamp with the negative reactors to this strong design language will probably cross it off the list without turning a wheel. We eat with our eyes first, after all, even when the meal costs forty grand. 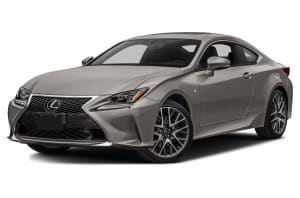