Germany's automakers seem to get their jollies by watching us scratch our heads. Instead of sticking to traditional automotive bodystyles, they've been deliberately blurring the lines between them and inventing new terminology with which to classify their creations. So we're left with low-slung sedans called "four-door coupes," crossovers marketed as "sports activity coupes" and slant-back luxury vehicles we wouldn't even know what to call. The upshot is that the customer is left with more choices, but those choices can also make buying a new German Whatchamacallit that much more bewildering. Which brings us to the Volkswagen Scirocco – a model which returned to the fold shortly before many of these segment-busters arrived on the scene.

Volkswagen introduced the original Scirocco 40 years ago as a replacement of sorts for the Karmann Ghia (itself only VW's second model after the Beetle), with a timeless design penned by Giorgetto Giugiaro. The second-generation model arrived in 1981 and stayed in the mix until 1992, after which point the Corrado (with which it initially overlapped) effectively took its place until 1995. It took another baker's dozen years, however, before Wolfsburg saw fit to bring back the Scirocco. When it did, we were left trying to figure out what to call it. A hatchback? A coupe? A sports car? Volkswagen's own literature uses all three terms interchangeably, likely because, as fashion-forward as it is, the modern Scirocco's chopped-down, extended roofline seems to defy classification every bit as much as the Porsche Panamera, BMW X6 or Audi A7.

Those questions weren't answered, naturally, with the debut of the facelifted model at the Geneva Motor Show in March. So with the sleek and stylish Scirocco still missing from North American showrooms, we boarded a flight for its home market in Germany to see if we could wrap our heads around this shapely enigma. 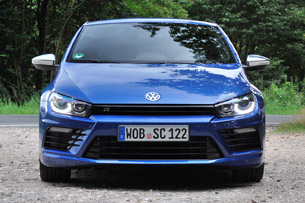 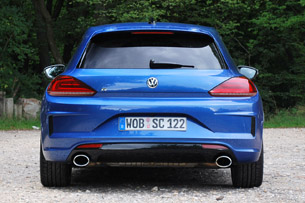 VW has given the existing Scirocco a mid-life facelift to keep up interest in showrooms.

The revived Scirocco revealed at the 2008 Geneva Motor Show was based on the VW Group's A5 platform that also underpinned the company's contemporary Golf, Jetta, Beetle and Tiguan, as well as an array of Audis, Seats, Škodas and Volkswagen Commercial Vehicles. Many of those models have since been replaced by new versions based on the automaker's more advanced MQB platform, and there will eventually be a new Scirocco built on the new modular architecture as well. But in the meantime, Volkswagen has given the existing Scirocco a mid-life facelift to keep up interest in showrooms.

Although the updated Scirocco still looks very much like the outgoing one, put the two side by side and you'll immediately notice the sharply creased styling that updates its more rounded predecessor and better emphasizes its squat stance. Familiar but fresh is the name of the game. The headlights have been replaced with bi-Xenon units (optional on base versions, standard on the R), the taillights updated with LEDs, and the interior has been refitted as well with new seats, steering wheel, dash-top auxiliary gauge binnacle, trim and electronics. Of course there are new alloys and other minor updates as well, but the biggest advancements have been made under the hood. 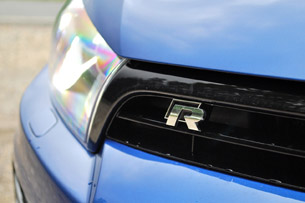 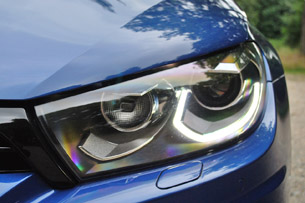 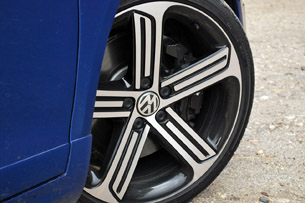 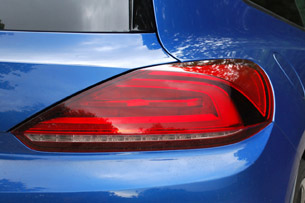 The Scirocco R doesn't pack quite as much punch as the latest 290-hp Golf R, it far outguns the lesser 210-hp GTI.

That's where you'll find a range of enhanced four-cylinder, turbocharged, direct-injection engines that are both more powerful and more economical than the preceding units. There are six options in all, including two diesels (with 148 or 181 horsepower) and four gasoline engines ranging from 123 hp in the base model all the way up to 276 hp in the top-of-the-line Scirocco R. Take a wild guess at which we chose to spend the day with.

Although the Scirocco R doesn't pack quite as much punch (or as many driven wheels) as the latest 290-hp Golf R, it far outguns the lesser 210-hp GTI with which it shares its front-drive layout. With 15 more horses under the hood, the 2.0-liter turbo four in the new Scirocco R further outguns any sleeper Škoda has made to date, and proved enough to rocket the Seat Leon Cupra 280 around the Nürburgring in record time. Its 276 horses also puts the Scirocco R right on pace with other performance-tuned European hatchbacks like the Renaultsport Mégane 275 Trophy and Opel Astra OPC.

Which brings us to the confusing bit – or the variety, depending on your perspective. When some rival automakers (like the aforementioned Renault and Opel) go with a more coupe-like form for their three-door hatchbacks, they leave the taller, boxier version with five doors exclusively. Volkswagen does both, so if you're in a market where the car is sold, you have the choice between the three-door Golf or Scirocco. 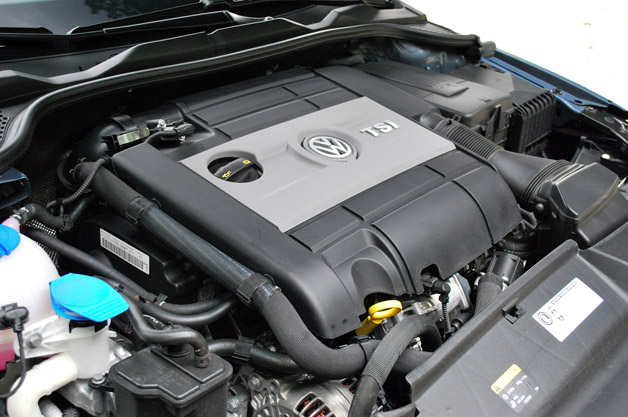 Particularly in the Scirocco R, you sit lower than you would in a Golf, with less glass around you.

The notion of the Scirocco sharing much with the Golf, however, evaporates the moment you lay eyes on its far sleeker, more stylish form, and disappears from memory altogether when you step inside. The switchgear and general interior design tells you you're in a Volkswagen, but if you didn't know otherwise, you wouldn't find much in common with a Golf. For starters, it feels like a bunker inside, a fact that might appeal to some but turn off others. Particularly in the Scirocco R, you sit lower than you would in a Golf, with less glass around you. The near shooting-brake roofline leaves you with tunnel vision out the back – not helped any by the large, integrated headrests on the back seats – and large blind spots over your shoulders. All of which might be fine if you're planning on leaving everyone else behind you, but the thick A-pillars – a common problem resulting from stricter roof integrity standards – leave you with sizable blind spots out the front as well, forcing the driver to dart back and forth between windshield and side glass when rounding a corner.

Fortunately, you can count on the Scirocco R to hold its line around that corner. The XDS electronic differential didn't leave us wanting for the added traction (or weight) of the Golf R's 4Motion all-wheel drive system and the car barely exhibited any front-end push despite all that power at the nose. In fact, we barely saw the systems flicker (much less feel any intervention) even when pushing hard on slick roads as the Scirocco handled flat through the bends.

Between the traction control (which can be defeated entirely), the stability management (which can only be reined back to the relaxed intervention points of Sport mode), the adjustable dampers (which offer Comfort, Normal and Sport settings) and the transmission (which can be set to Drive, Sport or Manual), the Scirocco offers the driver a wide array of options to find his or her ideal combination. We barely scratched the surface during our daylong drive, leaving the stability and traction control activated in the wet conditions, and could hardly discern much difference between the damper settings, but we found a satisfying and noticeable step as we switched between shift modes.

The Alcantara-trimmed seats offered good lateral but little lumbar support along a full day of driving.

Our tester was equipped with a six-speed dual-clutch transmission, which did a fine job of swapping and holding gears. In a model this performance-focused, however, we would have expected larger shift paddles, as we ended up blindly reaching for the close-by auxiliary stalks too many times instead. Of course that problem disappears if you opt for the more engaging manual, but most buyers will specify the quicker-shifting DSG. Both models top out at the same 155 miles per hour to which most German automakers voluntarily restrict themselves, but the DSG version gets to 62 mph two-tenths quicker at 5.5 seconds (a rate, we note, that is still 0.4 seconds slower than the more tenacious Golf R).

Either way, the Scirocco R packs meaty steering with above-average feedback and a positive on-center feel. The brake pedal offers excellent feedback as well, gripping internally ventilated discs measuring 13.6-inch up front and 12.2 at the rear. Watching the needle flick back and forth around the boost gauge atop the center stack offered its own share of entertainment, though we couldn't help but wonder why it was placed further away from the driver than the oil temperature gauge and analog clock. The Alcantara-trimmed seats – one of three options available in the Scirocco R alongside leather seats and racing buckets – offered good lateral but little lumbar support along a full day of driving. (We're told the leather option offers more adjustment.) Meanwhile, the sound bellowing out the dual exhaust tips proved more resonant than you'd expect from a turbo four. 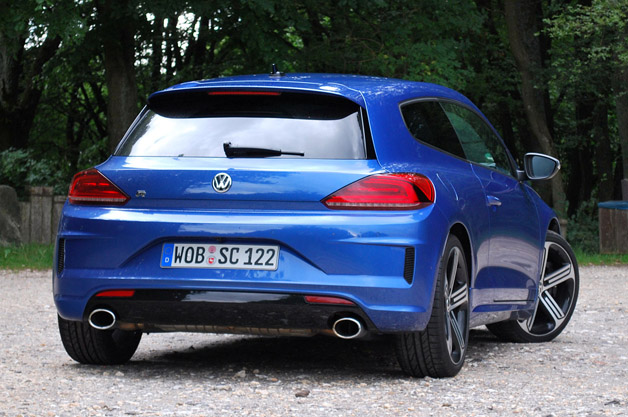 If this is evidence of what Wolfsburg can do with an aging platform, we're looking forward to seeing what it can do with newer technology.

Blasting down the Autobahn on the way back to the airport, we barely lost sight of an Audi RS3 running flat out in front of us, and found ourselves wondering once again what to call the Scirocco. A hatchback? Maybe, but we're not sure what that would make the Golf. A coupe? Not with that upright liftgate at the back. A sports car? Not with front-wheel drive, we'd argue. Put it in the same category, then, as the Peugeot RCZ or smaller Hyundai Veloster Turbo – both front-drive models that, like the Scirocco, are at least as much about style as they are about substance. But then again, if the current state of the German automotive industry has taught us anything, it's that labels and categories don't count for much anymore – at least beyond higher price tags.

The bigger question, in our mind anyway, is whether Volkswagen has made the right call by keeping the Scirocco on the other side of the Atlantic. It was, after all, designed for the European market, not ours. But if the updated Scirocco R is evidence of what Wolfsburg can do with an aging platform, we're looking forward to seeing what it can do with newer technology. And – not unlike with the Amarok pickup we drove recently – we hope it does so with the North American market in mind when it does.