Despite initially launching in just the Crew Cab configuration, the lineup of 2014 GMC Sierra and 2014 Chevrolet Silverado trucks will eventually grow to include three cab sizes and three bed lengths. Oddly enough, our first look at the Regular Cab bodystyle has arrived in a General Motors press release discussing the aerodynamics of the new truck, with an image showing a Sierra Regular Cab testing in the wind tunnel. GMC's website says that Regular Cab and Double Cab models will be available by summer.

While it really didn't take too much imagination to figure out what the two-door version would look like, this Regular Cab Z71 looks pretty sharp with its standard-length (6.5-feet) bed – a longer bed will also be offered. In regards to the aero tuning of the 2014 Sierra, these images show just how far GM has gone in maximizing the truck's fuel efficiency and reducing its noise, vibration and harshness (NVH) levels. Interestingly, the press release shows visual evidence that keeping the tailgate up is best for aero – there's always been some Mythbusters-level contention about such things –but GM also says that adding tonneau covers (preferably soft) and running boards can also help improve the overall aerodynamics. Scroll down for all of this aero info in the official press release.
Show full PR text

DETROIT – The all-new 2014 Sierra full-size pickup truck spent more development time in a wind tunnel than any GMC pickup before it, resulting in design changes that benefit both fuel efficiency and interior quietness.

To achieve improved airflow, aerodynamic engineers like Diane Bloch examined every millimeter of the truck to find areas of improvement, debunking some popular myths along the way.

To study the way air passes over, under and around the Sierra, engineers used General Motors' state-of-the-art Aerodynamics Lab, a 750-foot-long tunnel through which a 43-foot-diameter fan powered by a DC electric motor with the equivalent of 4,500 horsepower can generate winds of up to 138 mph. Aerodynamic advancement is one reason why the 2014 Sierra will be the most fuel-efficient V-8 pickup on the market.

"We can't stop air; we can only guide it through the path of least resistance. It's like electricity, without the shock," said Bloch, GM aerodynamic performance engineer. "The biggest misconception is that it's all about single components. But a certain side mirror design doesn't create a certain amount of drag, its interaction with the rest of the vehicle does."

For example, a new air dam below the 2014 Sierra's front bumper successfully reduces drag because it directs air toward the ground and away from the truck's rough underbody. And Sierra's ducted flow path between the grille and radiator prevents air from swirling inside the truck's front cavities.

Even the top of the Sierra's tailgate and the center high-mounted stop light are optimized to guide air cleanly around the truck. And because Bloch's team detected unwanted airflow between the cab and bed, new sealing has been added.

"We discovered that in the computational analysis we perform," said Bloch. "The most harmful air between the cab and bed was coming over the cab and down through the gap, so we paid the most attention to that specific area."

The pickup market has a great number of available aftermarket accessories, and Bloch says those have varying impact on aerodynamics. Add-ons like bug deflectors on the hood, wider tires or aftermarket bumpers can raise the drag coefficient, which is the measure of how air pushes on a vehicle as it moves down the road. The result: added noise and increased fuel consumption.

A long-disputed topic among truck owners is whether a tailgate raised or lowered is better for aerodynamics, but Bloch says a tailgate in the up position is more aerodynamically efficient. As air flows over the truck, it falls over the cab and pushes forward on the rear of the truck. With the tailgate down, the benefits of that airflow are diminished.

"Replacing the tailgate with an aftermarket net is worse than having no tailgate at all," Bloch said. "Imagine dragging a solid object and a fishing net through water. The net is going to require more muscle."

So what accessories can truck owners add to help aerodynamics? Tonneau covers for the bed help smooth airflow over the truck, and Bloch says soft covers are more beneficial than hard covers because they form to how the air wants to flow. Running boards can also help air flow smoothly down the truck's sides.

GMC has manufactured trucks since 1902, and is one of the industry's healthiest brands. Innovation and engineering excellence is built into all GMC vehicles and the brand is evolving to offer more fuel-efficient trucks and crossovers, including the Terrain small SUV and Acadia crossover. The 2014 Sierra half-ton pickup boasts all-new powertrains and design, and the Sierra Heavy Duty pickups are the most capable and powerful trucks ever built by GMC. Every retail GMC model, including Yukon and Yukon XL full-size SUVs, is now available in Denali luxury trim. Details on all GMC models are available at http://www.gmc.com/, on Twitter at @thisisgmc or at http://www.facebook.com/gmc. 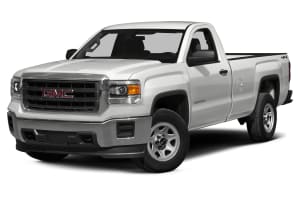