Hey there science fans! Want to learn more about the nature of the universe and its elements, and find out what's cool about the new Toyota Prius V hatchback hybrid? Then we've got three science lab commercials for you...

In the first episode, " Science on the Go: Mass Matters," Ben Bowlin from How Stuff Works (a Discovery video channel) experiments with his mobile lab, the Prius V. It starts with solid mass, which has a rigid set structure, and then the hybrid gets loaded up with plastic balls – 9,000 of them. But, you just might be asking, happens when we store something that doesn't have fixed volume or shape?

That's when we move on to the second episode about liquid mass – this time it's about finding what kinds of liquids can be placed into one cubic foot. So the main point of this commercial is that – surprise! – you can cram more liquids into your Prius V than solids. You can load 18,000 apples in juice form into your Prius V, and you could fill up the car with over 500 gallons of gasoline. Since the Prius V gets 44 mpg in the city, you could drive it 22,000 miles – just shy of being able to drive around the earth. If, you know, oh, forget it – you know.

The third episode goes to Ben's favorite element – plasma. Plasma is like gas, but it's ionized, meaning it has free roaming electrons carrying the current and generating the magnetic field. It shows up in flashes of lightning, in fluorescent bulbs and in the sun, which is a "gi-normous" ball of plasma. Bringing this back to planet earth, the question becomes: How many plasma flat screen TVs can you fit into a Prius V? It depends on the different types of televisions you load, of course. You can watch a lot of TV shows, but if you own a Prius V, you'll be too busy driving.

Okay, let's see, what can we take away here? U.S. students do lag behind other nations in test scores and gaining solid fundamentals of science and mathematics, but these "Science on the Go" TV spots probably won't help since they lack a couple of things: namely, educational value and marketing merit. Nonetheless, you can watch them below. 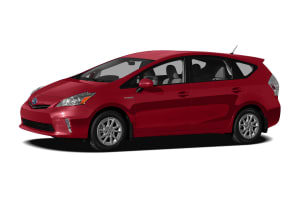