No it's not a GT500, it's something even more powerful and exclusive

PLYMOUTH, Mich. — “Jack Roush Edition Mustang” may be a bit of a mouthful, especially considering it doesn’t really tell you much, but rest assured, this supercharged 2020 Ford Mustang GT with a Shelby GT500-topping 775 horsepower is every bit as nutritious and filling as its name suggests.

If you’re a fan of fast Fords, then the Roush name should be familiar to you. Not only have they been building, tuning and racing just about everything the Blue Oval offers for decades, but they even partner to produce some of the components sold by Ford Performance.

While what you’re doing is fundamentally no different from buying a Mustang GT at a local lot and then dropping it off at your favorite speed shop for upgrades, Roush is a large enough operation that most of this process is handled behind the scenes. Roush even has a build-and-price tool right on its website which can send your order directly to your local Roush-affiliated Ford dealer.

Here’s the short version: You get a supercharged, 5.0-liter V8 producing 775 horsepower and 670 pound-feet of torque mated to the factory six-speed manual transmission. The MagneRide adaptive suspension is ported over from Ford’s Level 2 Performance package and recalibrated by Roush, and all four corners get the six-piston Brembo brakes, 20-inch Roush wheels and a set of Continental ExtremeContact Sport tires in 275/35ZR-20. The active aerodynamic carbon fiber rear spoiler is tied into the Mustang’s performance modes and automatically adjusts based on the mode you choose. 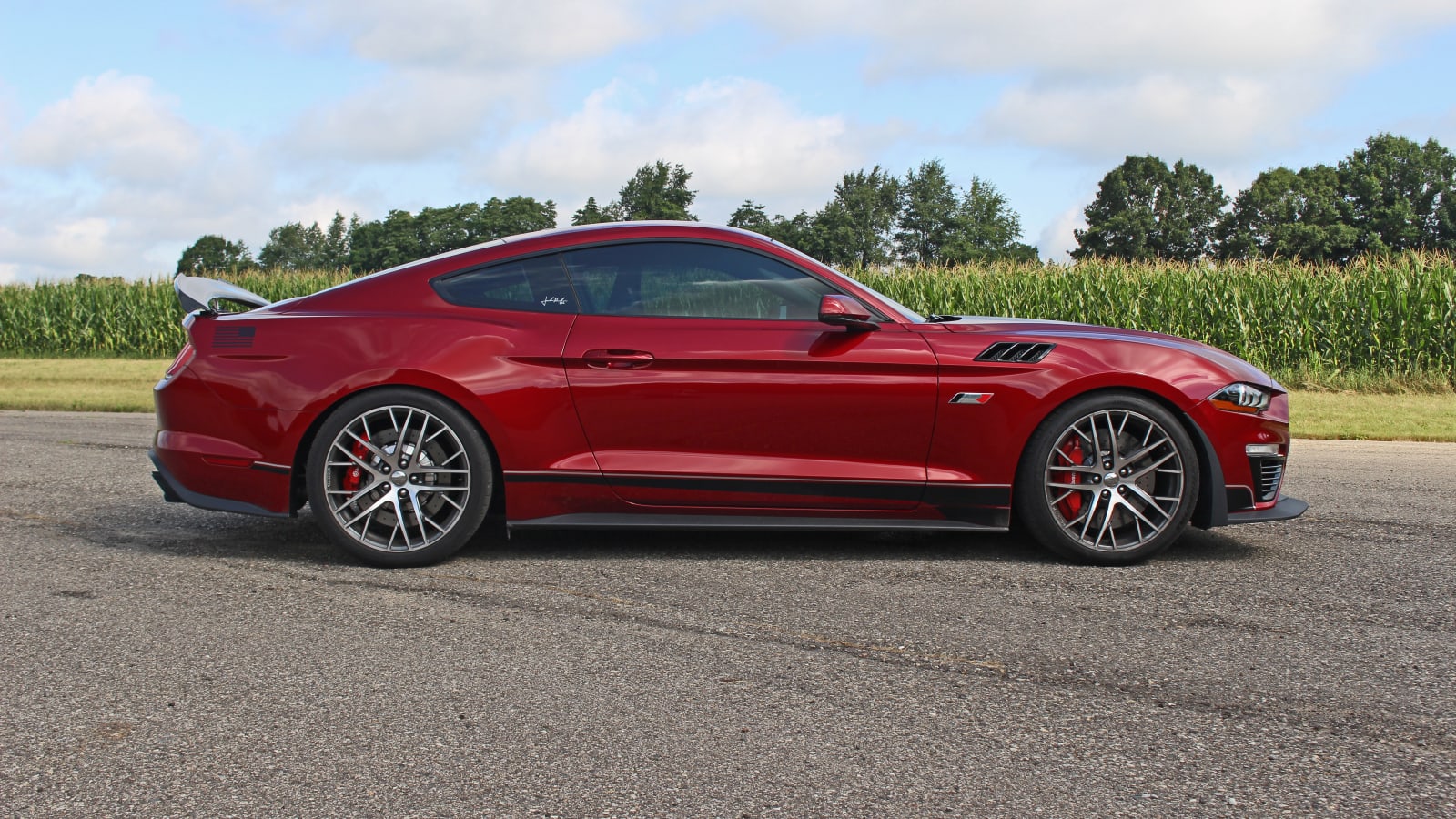 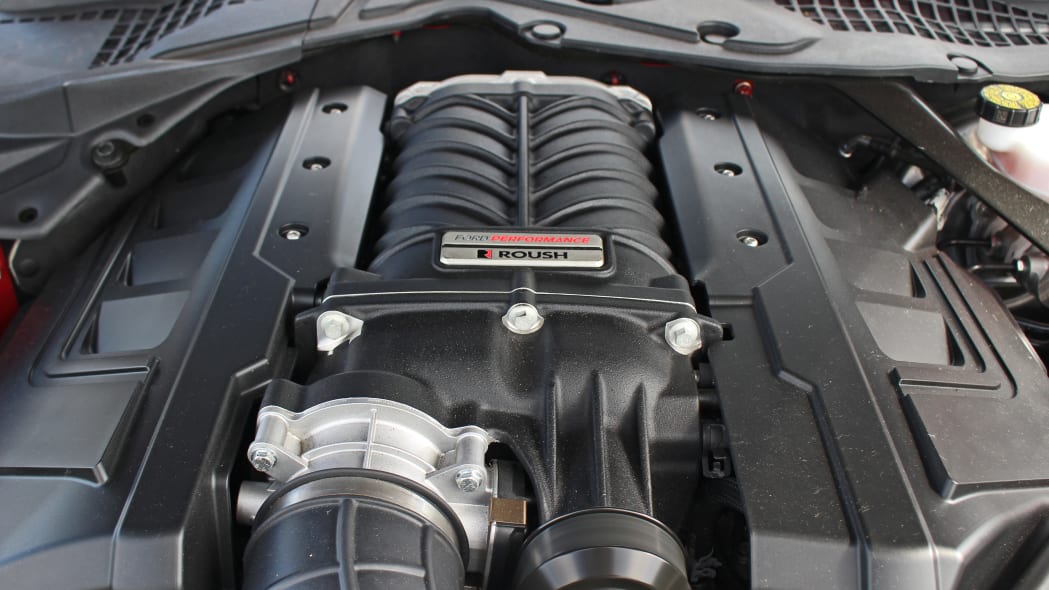 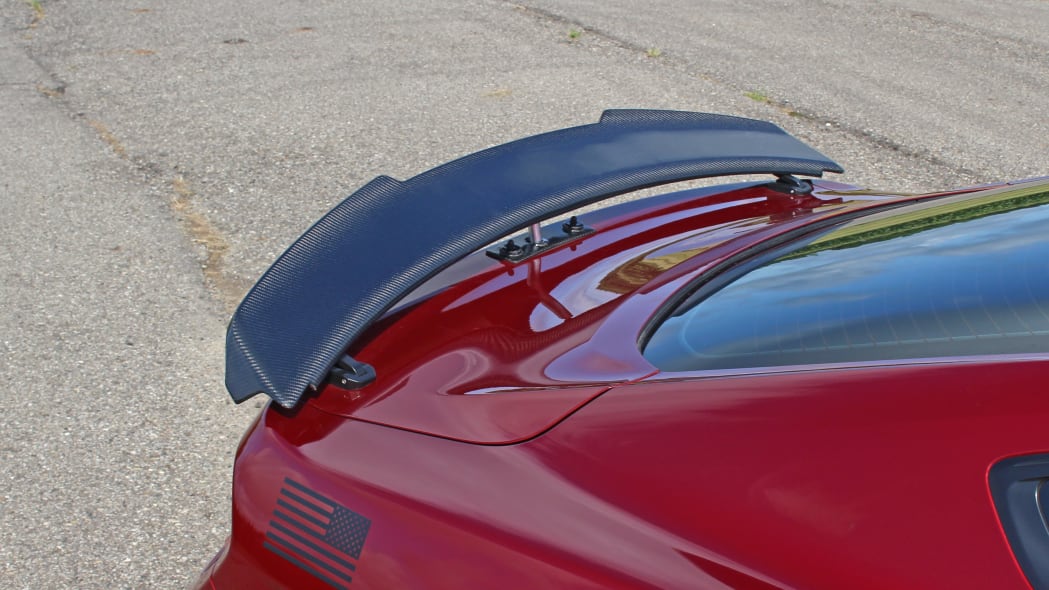 For the true track junkies, there’s an available Competition package with lightweight 19-inch, matte-finished wheels care of Weld Racing. These get a set of Continental ExtremeContact DR tires (denoted by Roush as track-use only), and a toolkit dubbed the “Jack Pack Track Box,” which includes a jack, jack stands, a torque wrench, a tire pressure gauge and a set of wheel wedges.

With the Competition pack, Roush claims the car will do 0-60 in 3.4 seconds and the quarter-mile in 10.7. It’ll also pull 1.14 lateral g on a skidpad, and thanks to those monster brakes, this pony car is just as comfortable on an autocross or road course as it is on a drag strip.

The Jack Roush Edition also gets a unique exterior graphics scheme and some interior dress-up. Inside, you get custom leather and suede seat upholstery, a race-inspired steering wheel (only with the six-speed), billet aluminum pedals, embroidered floor mats and illuminated door sill plates. The dress-up continues under the hood, where just about everything with a cap on it gets a billet piece with “Roush” etched into it in one way or another. You also get the signature of the man himself just about everywhere you look.

Like the 2019 Stage 3 Mustang we drove last year, this 2020 Jack Roush Edition impresses with its competence. Puttering around town, it’s simply a Mustang GT. It’s not until you really open it up that things get nutty. And boy, do they get nutty, but always in a predictable, repeatable and approachable way.

Adding power to a factory car is always risky, especially when you’re nearly doubling it, as the case is here. Not everybody gets it right on the first try (or in fact at all). Throwing additional cooling capacity and bigger brakes at the problem is all well and good, but it won’t solve the basic drivability issues that are bound to creep up on you. Fortunately, Roush’s modifications don’t transform the Mustang’s character. If anything, it’s simply the same formula, only at a different — and much higher — point along its mathematical curve.

Superchargers offer inherently linear power delivery, which is a perfect match to a revvy, naturally aspirated V8 like the Mustang’s. While the 5.0 offers plenty of torque, it’s not the kind of engine that delivers its power in a series of quick, low-end gut-punches. Rather, it builds to its screaming peak. Replace “screaming” with “whining,” and you’ll begin to understand exactly what it’s like to experience the Jack Roush Edition’s 775 ponies at full song.

Down low, the custom multi-mode exhaust is barky and burbly, but reasonably close to the factory tone. Keep your throttle inputs mild, and that’s all you hear. Go deeper, and you’ll hear a rush of air, followed by a high-pitched thrum that transitions into what we imagine it sounds like if you put a put a kazoo on a jet engine. It’s wild and oh so satisfying.

And it’s your first clue that you’re probably doing something completely illegal. Rather than have to redact a lot of specifics, let’s just say that we absolutely believe that this car can run toe-to-toe with a factory Shelby GT500, with the edge just going to the Cobra thanks to its dual-clutch transmission.

In this, the Jack Roush Edition’s greatest strength is also a glaring weakness. It’s so easy to manage, so unassuming in character, that you can find yourself in arrest-me-now territory before you even have a chance to truly appreciate the experience. In short, it’s a great street car that is simultaneously way too much car for the street.

If you ask us, the most remarkable thing about this car is just how much of it is still fundamentally Mustang. Sure, the GT’s factory engine and transmission cooling systems get upgrades and the supercharger gets its own auxiliary low-temp radiator, mounted behind the passenger-side bumper grille; an auxiliary engine cooling radiator resides behind the inlet on the opposite side. 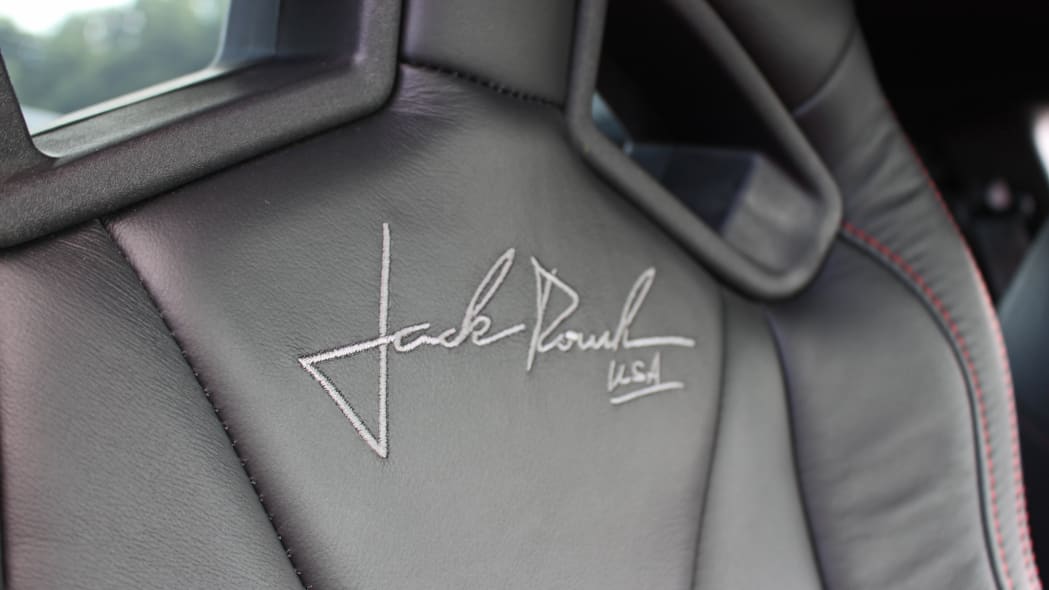 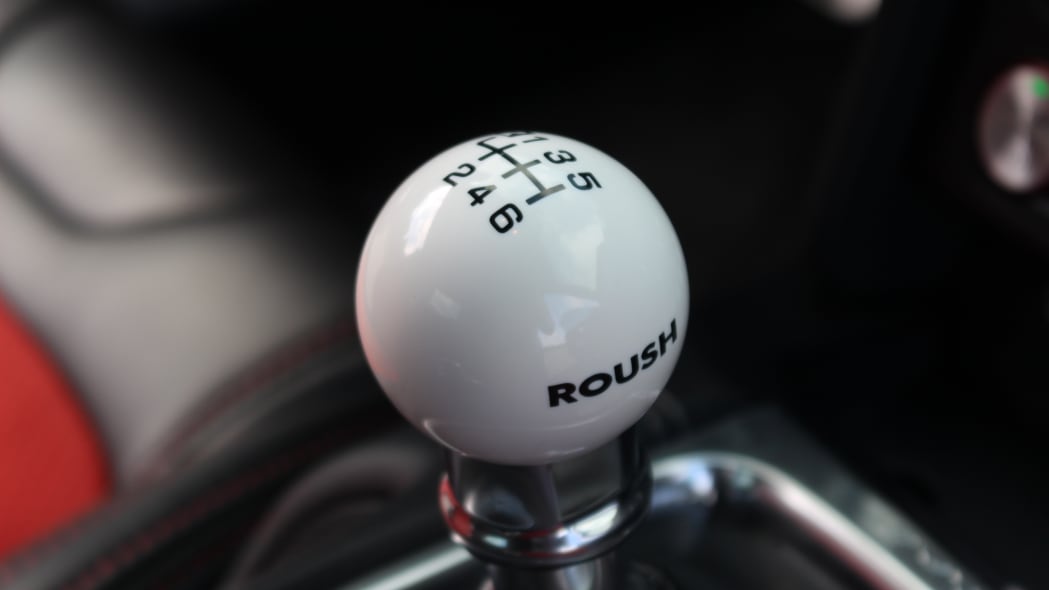 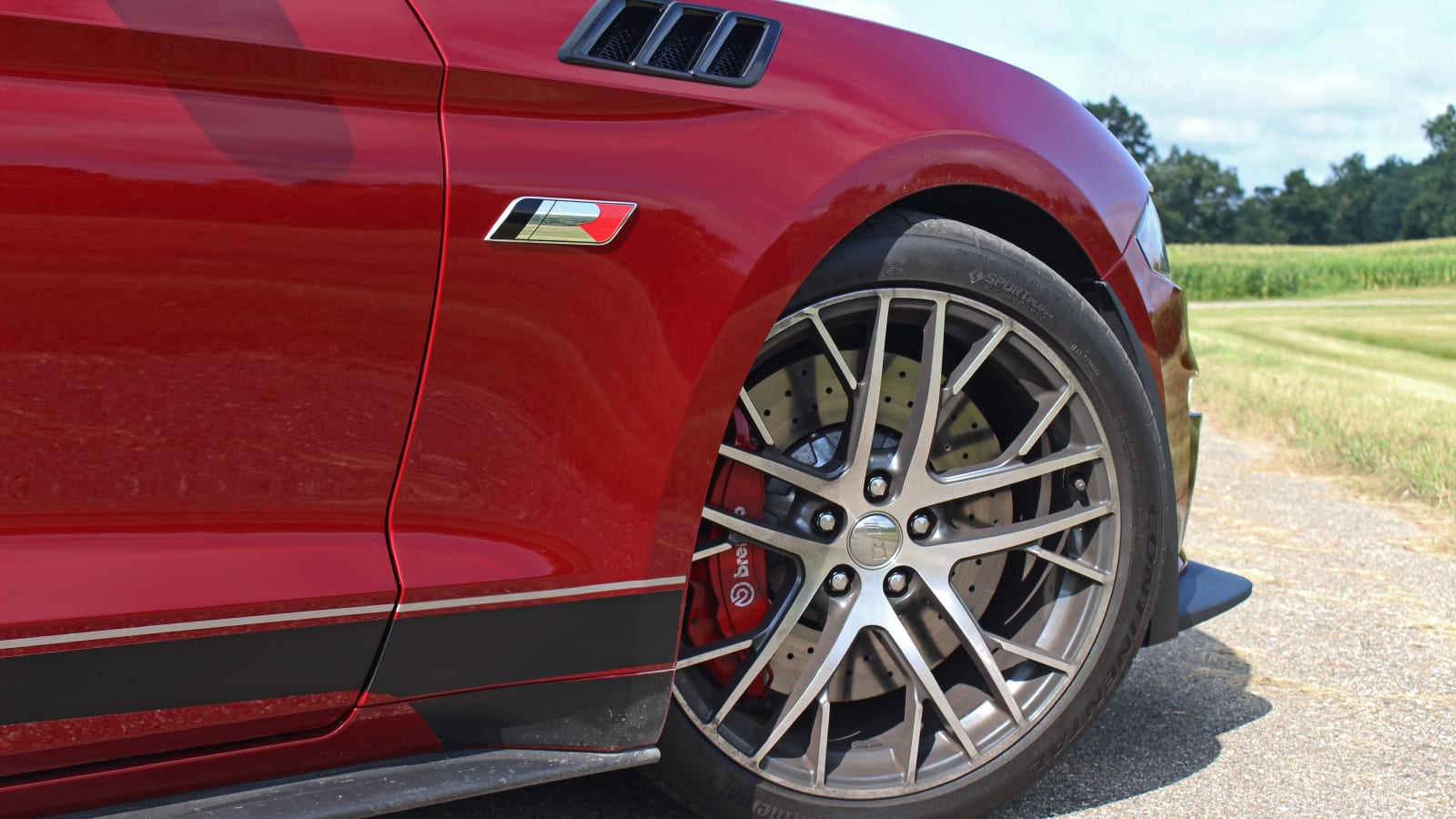 But that’s virtually all. Despite its 775-horsepower output, the Phase 3 Roush Supercharger system used here does not require any other supporting modifications. The 5.0-liter “Coyote” V8 is otherwise as it was when it left the factory, as are both the six-speed manual and 10-speed automatic transmissions.

“Extensive calibration and development work was done to ensure that the product is robust at these power levels,” Roush says, and the company backs it up with an in-house, 5-year/60,000-mile warranty program.

The price for all of this? Well, you’ll pay $50,995 on top of the cost of a spanking-new Mustang GT just to get into a Jack Roush Edition, and that’s not including the optional Competition package. That number gets even scarier if you glance at Roush’s other offerings. A Stage 3 upgrade, which boasts a just-as-eye-watering 750 horsepower, can be done for less than half as much ($24,995). Why the difference?

Well, for starters, you get less standard with the Stage 3, and closing the gap with add-ons will cost you. To get most of the same goodies you get with the Jack Roush Edition — such as that swanky active aero — you’re paying closer to $35,000 for your Stage 3 upgrade. Some items, such as the Weld wheels from the Competition pack, aren’t available at all.  That still leaves a $15,000 gap, however, which is the price you’re paying for 25 additional horsepower, the dress-up bits and — well, let’s face it — exclusivity. Only 60 of these will be built (not including this or other prototypes, of course). That makes even the factory Shelby GT500 seem commonplace by comparison.

Considering that you’re looking at pricing similar to a factory GT500, the Jack Roush Edition needs to be this impressive just to be worth a second glance, which we wholeheartedly believe it is. Even a well-optioned Stage 3 can scratch the itch, and for a little less coin. Plus, unlike the factory ringer, this one comes with a stick.