This government surveillance van is both cool and creepy, and it could be yours

Pay no attention to the orange 'light' on the roof

Whether you're planning a heist and need to gather information, or you're a government agency tracking down the leader of a crime ring, Hollywood has taught us that the unmarked van is the ideal machine for gathering intel. And apparently that's not just a Hollywood trope, because you can buy this actual, honest-to-goodness ex-government surveillance van: a 1998 Plymouth Grand Voyager. It's being sold by the Chicago suburb of Streamwood, Ill., on the government surplus auction site GovDeals.

According to the description, the van was acquired by the town as part of a drug seizure and converted to surveillance duty. It looks like a plain white Grand Voyager for the most part, except for the amber flashing light on the roof. Or at least it looks like a light. It's actually the disguise for the camera periscope. Open up the sliding door of the van and you'll discover a swivel mount for the camera, a TV mounted to the back of the driver's seat, and a toolbox that holds all the electronic equipment, including battery chargers for the van and the camera. There are also solid panels behind the windows so that people walking by can't peer in and see all the equipment. It's a bit less wild than some of the vans we've seen on film, but those Hollywood vans are usually larger commercial vans that can store more people and stuff.

Less interesting details include the fact that this Grand Voyager has a 3.3-liter V6 with an automatic transmission. It has just over 100,000 miles and was good for a little more than 150 horsepower and 200 pound-feet of torque when it was new. The interior looks impressively clean, as does most of the exterior, but the description and photos highlight the fact that the front strut towers are rusty and in need of repair. Included are new strut towers, but obviously the welding in and painting is the expensive part.

Also, while we think this van is pretty neat, since it's an actual surveillance van like we've seen on film for years, we would feel creepy actually owning it. After all, it's a vehicle for watching people, and while a government might have a legitimate reason for doing that, your average person doesn't. Unless you need a prop for a film, are going to show it off at car shows, or are another city government needing a cheap surveillance car, we think having this would be a little too weird. But if you have one of those reasons, or are less worried about what people think, you have a few more days to bid. As of writing, the bid is only at $1,325. 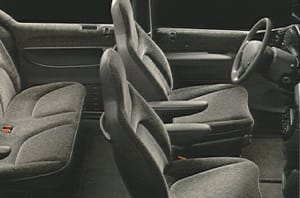