Wildly different in execution but common in spirit, driving the ultimate gas- and electric Porsches back to back

READING, England – What does it take to make 640 horsepower’s worth of cutting-edge, 992-gen 2021 Porsche 911 Turbo S feel like last century’s technology? Simple. Drive it along a twisting backroad at pace and then return immediately to do the same in a Porsche Taycan Turbo. And be glad your mother isn’t there to hear your response to what 670 instantly deployed electric horsepower feels like.

But before experiencing that revelation, the 2021 Porsche 911 Turbo S would be driven first on a favored local test route. That experience is documented extensively in my first drive review here on Autoblog, but honestly, I could have pretty much told you what the 911 Turbo S would be like to drive without turning a wheel. With a little previous experience it’s easy to extrapolate how a few more percent of this, a couple more inches of that and a chunk more horsepower might compare with what’s been before. The Taycan? I’m flying blind.

Slipping directly from 911 to Taycan is a lesson in familiarity, with a twist. There’s the same low-slung driving position, slim seats and a conventional steering wheel with that familiar crest at its center. There’s even that traditional sweeping instrument display behind – and partially obscured by – it. Meaning, just like in 911s, the outer dials are out of sight behind your thumbs. But it’s not recessed into a binnacle in the conventional fashion. The 16.8-inch display seemingly floats weightless above the dash while the rest of the switchgear has been replaced by button-free, touch-sensitive surfaces. It feels fresh, futuristic and cool.

Obviously, there’s no engine noise, just a pulsating, synthesized warble while pulling out of the parking lot. But even in the first few feet the tautness of the steering, the instant response and sense of the panelwork shrinking around me feels familiar. Sartorially this feels more like athletic attire than the track suit vibe of a Panamera or Cayenne and, four doors or not, the Taycan is definitely more sports car than sedan.

At a steady 70-mph cruise, there’s little truly remarkable to report. The Taycan rides flat, there’s clearly way more power than I need under my right foot, and it ticks along in a refined manner without any sense of drama. Frankly, in this environment, gasoline, diesel, hybrid or pure EV would feel pretty much interchangeable (and as Autoblog has previously discovered, electric range isn't even much of a concern).

The point the Taycan needs to prove comes off the highway and on the backroads. I’d be kidding if I said my efforts an hour previous in the 911 Turbo S had left literal tire tracks for the Taycan to follow, but there are emotional ones. Can it keep up?

Hell yeah. Immediately, the first burst of meaningful acceleration in the Taycan obliterates any thought of complaining that Porsche applied the Turbo badge to something that not only lacks a turbocharger, but an internal combustion engine to attach one to. Three seconds to 60 mph may be 3/10ths slower than the 911 Turbo S, but without the lag, the noise of an internal combustion engine or punctuation of gearshifts, it actually feels faster.

Of course, I expected the Taycan to be fast. I knew it would be quiet, lag-free and futuristic. Optioned to Turbo S spec with PDCC active anti-roll stabilization and rear-axle steering, it’s got equivalent chassis hardware to the 911 Turbo S I’ve just swapped from, offering a meaningful comparison on that score. Sure, it weighs nearly 1,500 pounds more, but that’s mainly between the axles and beneath their center line. There's also the sense of the wheels pushed to the corners and mass contained within them being an obvious difference to the 911’s historically quirky weight distribution. It shows.

Even drilled down in its sportiest setting, the 911 Turbo S pitches, shimmies and rolls according to inputs from pedals and wheel. Which is entertaining and fun for a keen driver. The utter flatness of the Taycan’s cornering poise is nearly as unnerving as the total silence of its outrageous acceleration, the lack of reference from ears or seat of the pants meaning you often find yourself carrying multiples of the speed you thought you were. It’s that fast. And that composed.

The capability in the chassis means, if you are pushing it, you hear a light squeal from the tires before there’s even a flicker of intervention from the stability control. Full disclosure – if this is happening you are going extremely fast. 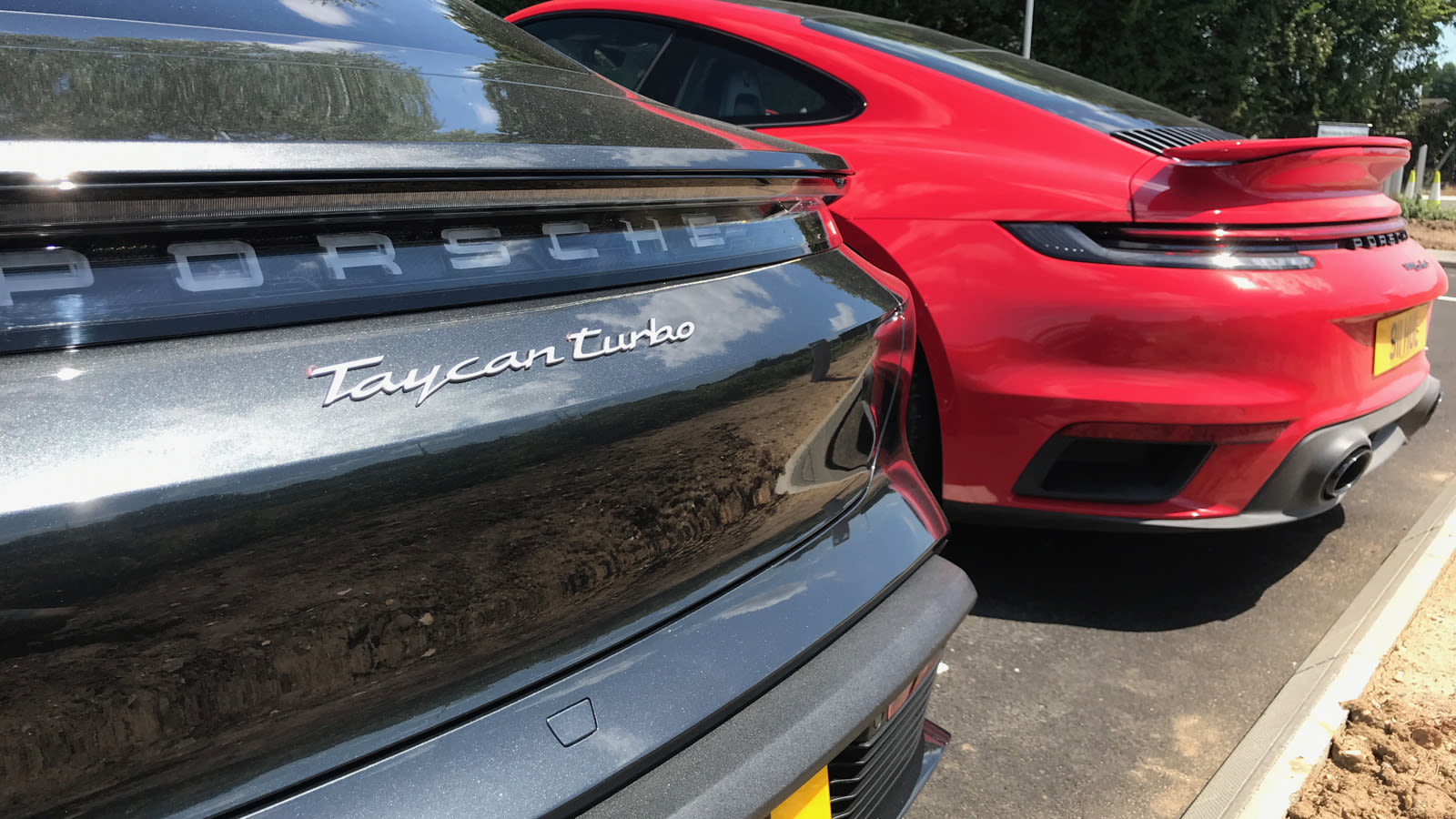 Aloofness at huge speeds is one characteristic carried from generations of Porsche Turbos into this Taycan. But in the electric age, it’s taken to a whole new level. You might fear that excesses of grip and power might leave the driver feeling like a spare part. But it’s still a Porsche. The seamless integration of tech is testament to long-standing engineering expertise, and proof it translates from the internal combustion age into the electric one.

It’s there in every phase of the corner, from the perfectly judged bite in the first few degrees of steering lock to the confidence to plant the long-travel throttle mid-corner, happy you can ride out the warp-speed acceleration with the kind of rear-biased traction 911 drivers have always enjoyed. That Turbo badge may now be abstract in mechanical terms, but in spiritual ones it survives translation.

It’s easy to throw around descriptions like "revelatory" and "game changing," but my from-the-hip impressions of the Taycan are of both, while simultaneously being grounded in the long traditions of the brand. No mean feat. The Taycan is some car.

$8,641 - $8,641 Nat'l avg. savings off MSRP
See Local Pricing
I'm not in the market for a vehicle at this time. Please move this suggestion to the side for 30 days.
Huge Savings