IndyCar drivers are flocking to virtual racing, and so are TV viewers and fans

As mainstream motorsports shut down their seasons amid the coronavirus pandemic, IndyCar driver Sage Karam welcomed them into his world – virtual racing. Karam, a 25-year-old who has raced six times in the Indianapolis 500, also is a world-class talent behind the wheel of a racing simulator at his home in Nazareth, Penn.

With real racing on hold because of the pandemic, IndyCar joined with online racing simulation service iRacing last month to stage the first in a six-race virtual season, the IndyCar iRacing Challenge. Twenty-five IndyCar regulars competed at Watkins Glen International, or rather the virtual rendition of it, and Karam dusted them all. He qualified fastest and led 43 of 45 laps to win by more than 3 seconds over Felix Rosenqvist.

The race drew more than 400,000 live viewers, and more than 600,000 views over IndyCar, iRacing and the drivers’ online channels. Karam, who drives for the Dreyer & Reinbold Racing IndyCar team in real life, became a popular interview before and after the virtual race, including a segment on ESPN’s SportsCenter the night of his victory. The following week, as he prepared for the second race at the virtual Barber Motorsports Park that you can watch above, Karam described the experience and offered advice for aspiring sim racers:

Knowing that everyone looked at you as a sim-racing ringer, how much pressure did you feel going into the Watkins Glen race?

“People on the fantasy leagues were saying, ‘I picked you, you’d better come through!’ I actually got more nervous than I do for a real race.”

Could you have imagined the amount of attention you got after winning this race?

“One of my childhood dreams was to be on SportsCenter. I just never thought it would come from sim racing. I never thought the attention would be this big for a virtual race. I’ve probably done five or so interviews a day since the race. And leading up to the race I had a lot of interviews because I was one of the guys IndyCar was promoting. I was so worn out I took two days off from sim racing.” 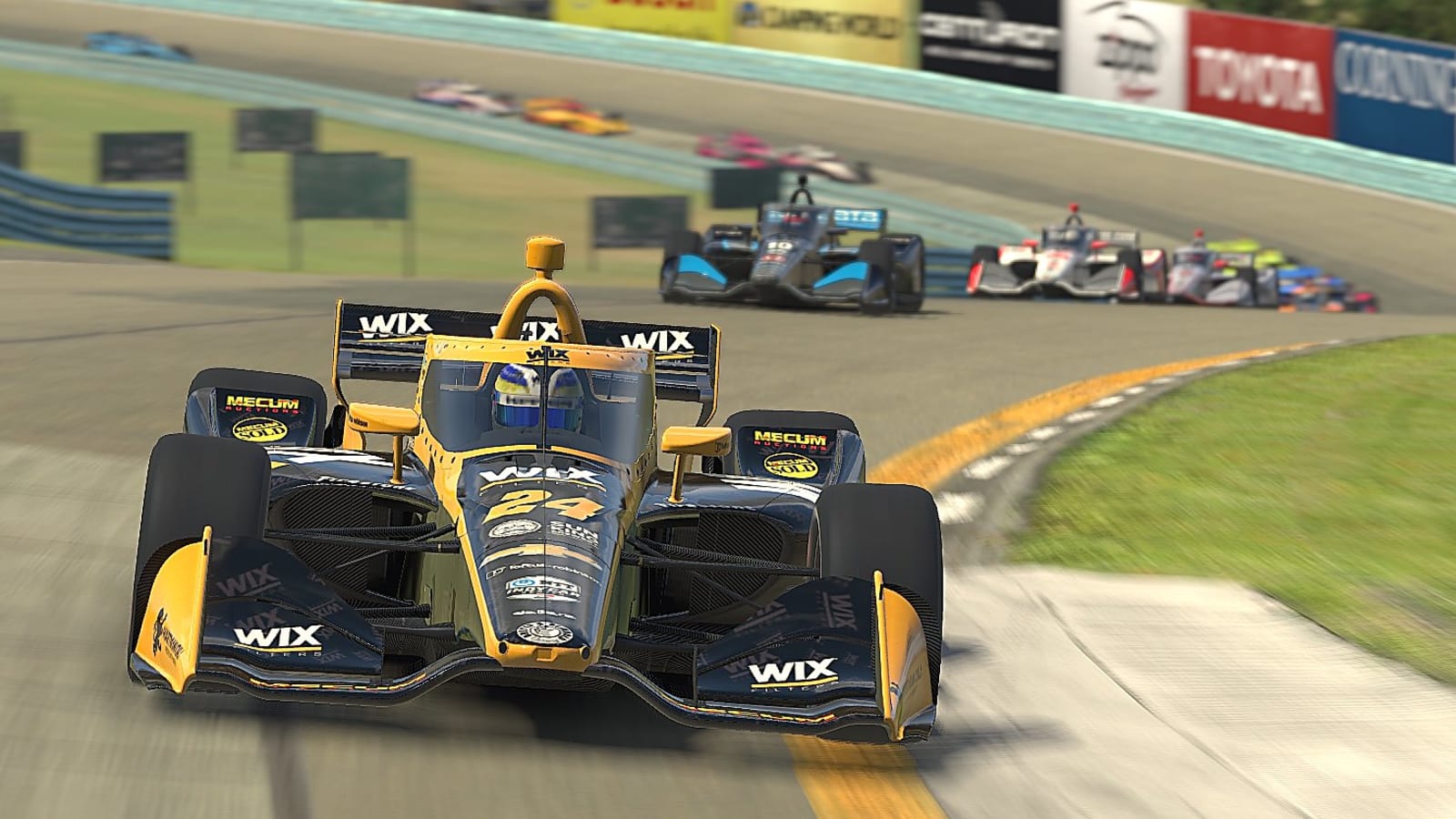 Did IndyCar drivers reach out to you for advice before the race? What did they want to know?

“I’ve talked to more real racers the past week or two than I have in a long time. A lot of them wanted to know the biggest things in the transition from the real car to the sim world. They wanted to know anything they could do immediately to shave off a couple tenths of a second. They also wanted to know that they had everything set up properly with their equipment. Is their force feedback set right in their steering wheel and their brakes? If you don’t know how to get the settings right, you can get lost quickly.”

What part of sim racing is just like the real thing? And what can’t be replicated?

"I notice when I go IndyCar (sim) racing on ovals, I can feel like I’m losing the front end like it is in real racing. The most realistic things are the tracks, down to the details. iRacing does a really good job laser scanning the tracks, and when you go onto the sim you can expect the same bumps you feel on the real track. When I was coming up on the Road to Indy (stepladder series leading to IndyCar), I learned a lot of tracks through iRacing. I attribute a lot of my success to that, because I wouldn’t have known any of the tracks if it weren’t for iRacing.

“What can’t be replicated are the very minute details that you don’t even realize you feel in the real race car. In real life, it’s all these super little details that your body is able to process that allow you to predict what will happen next. In the sim you need the bigger details to happen for you to feel it.” 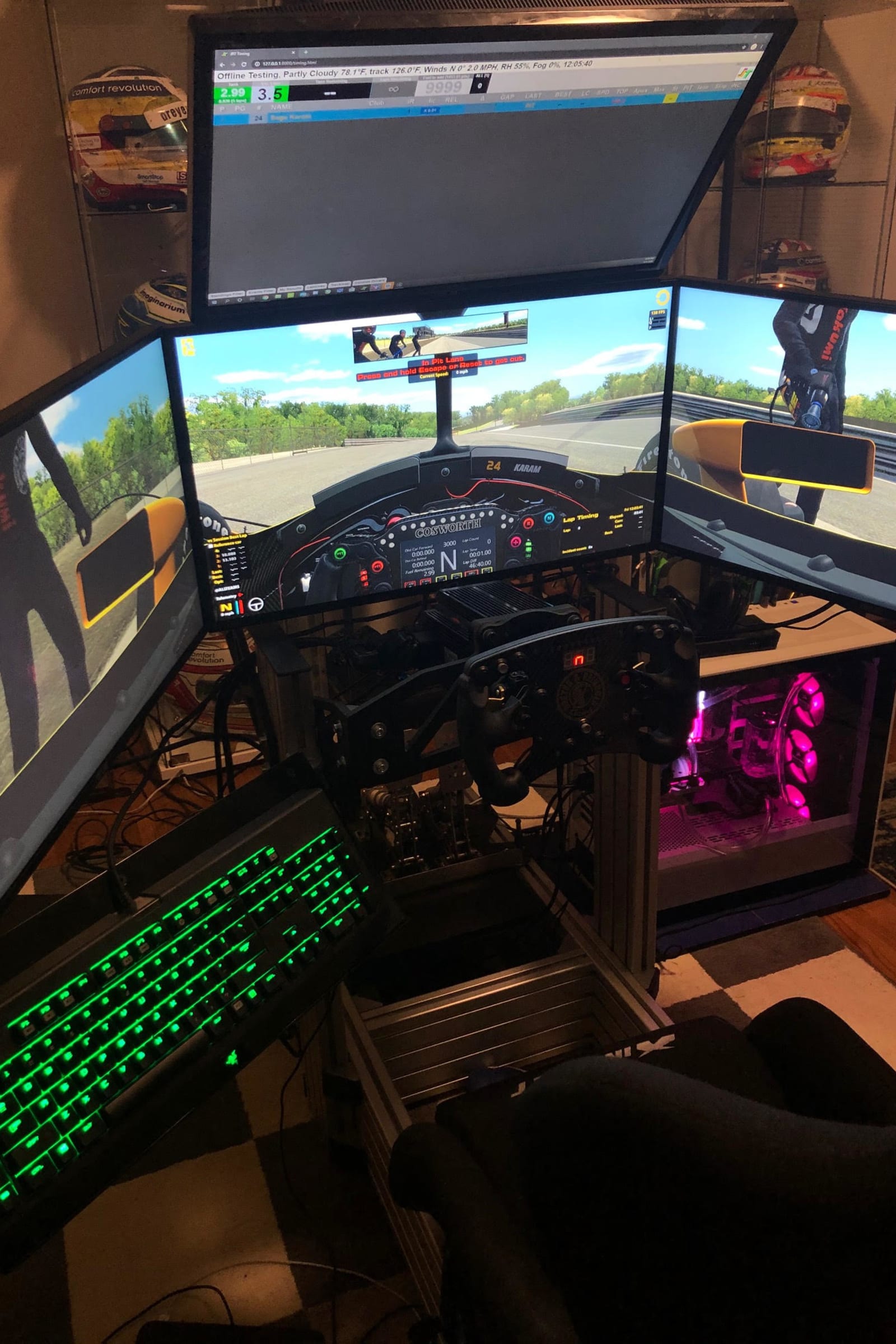 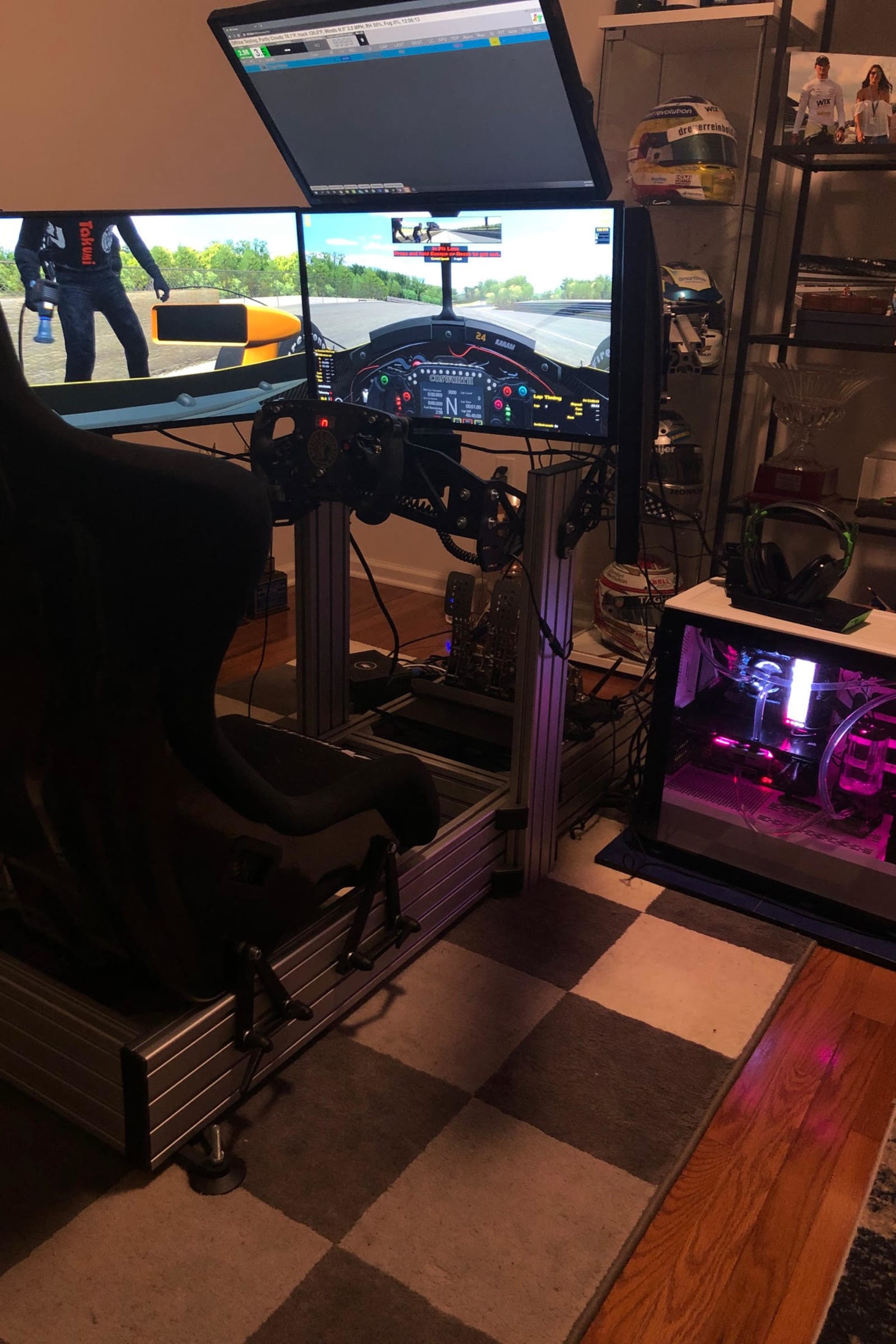 “The last time I had a new computer was 2015. Eventually I had to upgrade my computer, and this is the year I did that. I built this computer from scratch. I did all the research, bought a bunch of new parts and put it together. I’d never built a computer in my life, but I watched a lot of YouTube videos and read a lot of forums. It’s water cooled and everything. I don’t think the first computer that many people build is a full-on water-cooled PC, but I wanted to build something that was future-proof so I didn’t have to keep buying new things after a year or so.

I run three ASUS (video) monitors that are 144 hertz, and I run another monitor just for timing and scoring and for fuel calculations. My rig that holds the steering wheel and pedals is a Heusinkveld GT. I use Heusinkveld Ultimate pedals that I’ve had two or three years, and I just got a new steering wheel, a VRS direct-drive.”

Here is how the day ended for us. Tough day for @SageKaram and @WIXFilters as he collided with Kanaan who was rejoining the track in front of Karam. pic.twitter.com/TQ3dUIftKC

For someone just getting into sim racing, how much should they spend?

“I don’t want people to think they need to spend that much money to be competitive. When I started, I had a Logitech G25 steering wheel that I bolted to a desk and I sat in a roller chair. I just had a cheap computer that I’d put together with one monitor. Now, just my pedals cost as much as that whole setup.

There are a lot of guys in the pro series who are running Logitech G29 steering wheels that cost a few hundred bucks. Do I think it helps (to race with expensive equipment)? Yeah. But if you have the time and want to put the laps in, you can be fast on anything. When I got serious into sim racing, I qualified within the top 30 in the world and I was using a steering wheel that cost $300 at that time. It just shows that if you want to do it and have the time, you don’t need to have thousands and thousands of dollars to have fun and be competitive.”

What advice would you give to gamers who’d like to give sim racing a try?

“Don’t be afraid to try different cars, tracks and disciplines. And don’t be afraid to reach out to people. When I was growing up in iRacing, I didn’t understand a lot of things. I just did my own thing, but I wish I’d reached out to people and figured it out sooner. Now, (because of the pandemic) a lot of people have a lot more time on their hands. If someone is aspiring to do it and wants some help, just ask us. We’re looking for stuff to do and people to talk to and races to race.”

The next IndyCar iRacing Challenge will be Saturday from a "Driver's Choice" track. There will then be three more races, including at a "Random Draw" track (April 18), at the virtual Circuit of The Americas (April 25) and at a non-INDYCAR "Dream" track (May 2).