It's probably not the CT5-V you've been expecting

Top notch handling is only marred by a substandard interior and uninspired exterior design. The V6 in the CT5-V is potent, but the base four-cylinder is a letdown, as Cadillac's sedan still doesn't find the right niche.

6
View All Specs
Add a Review

PALM SPRINGS, Calif. — This isn’t the Cadillac CT5-V we were expecting. After years of successively higher horsepower and world-beating performance statistics, Cadillac flipped the script with the CTS-replacing CT5 by making the reborn car’s first V-badged sedan a middle performance tier that will slot below a new model that hasn’t yet been released. The outgoing CTS-V pounded the pavement with 640 horsepower; the CT5-V we’re discussing here offers up a seemingly paltry 360 ponies.

The CT5’s styling aligns with recent models like the XT4, XT5, XT6 and CT6, but is another major departure from the CTS it replaces. The automaker’s abandoned Art and Science design philosophy culminated in a CTS that looked modern and distinctive. Crisp lines, clean edges and sharp features have given way to the CT5’s more flowing sense of style, and with the exception of its gracefully curved pseudo-fastback greenhouse that results in an unfortunately awkward C-pillar transition, it’s right on the border of blending in instead of standing out.

As you would expect, the CT5-V has a more aggressive look than other CT5 models. Bits that are bright on the standard car are blacked out on the V, and the sportier car has a more chiseled front face with a mesh grille that flows more air than if it were just wide open. Similar changes are seen in the cabin, where the V replaces wood trim with carbon fiber. We’d prefer some other trim options in the V, like maybe brushed aluminum, since the monochromatic dark leather with dark trim leads to — you guessed it — a starkly dark interior. 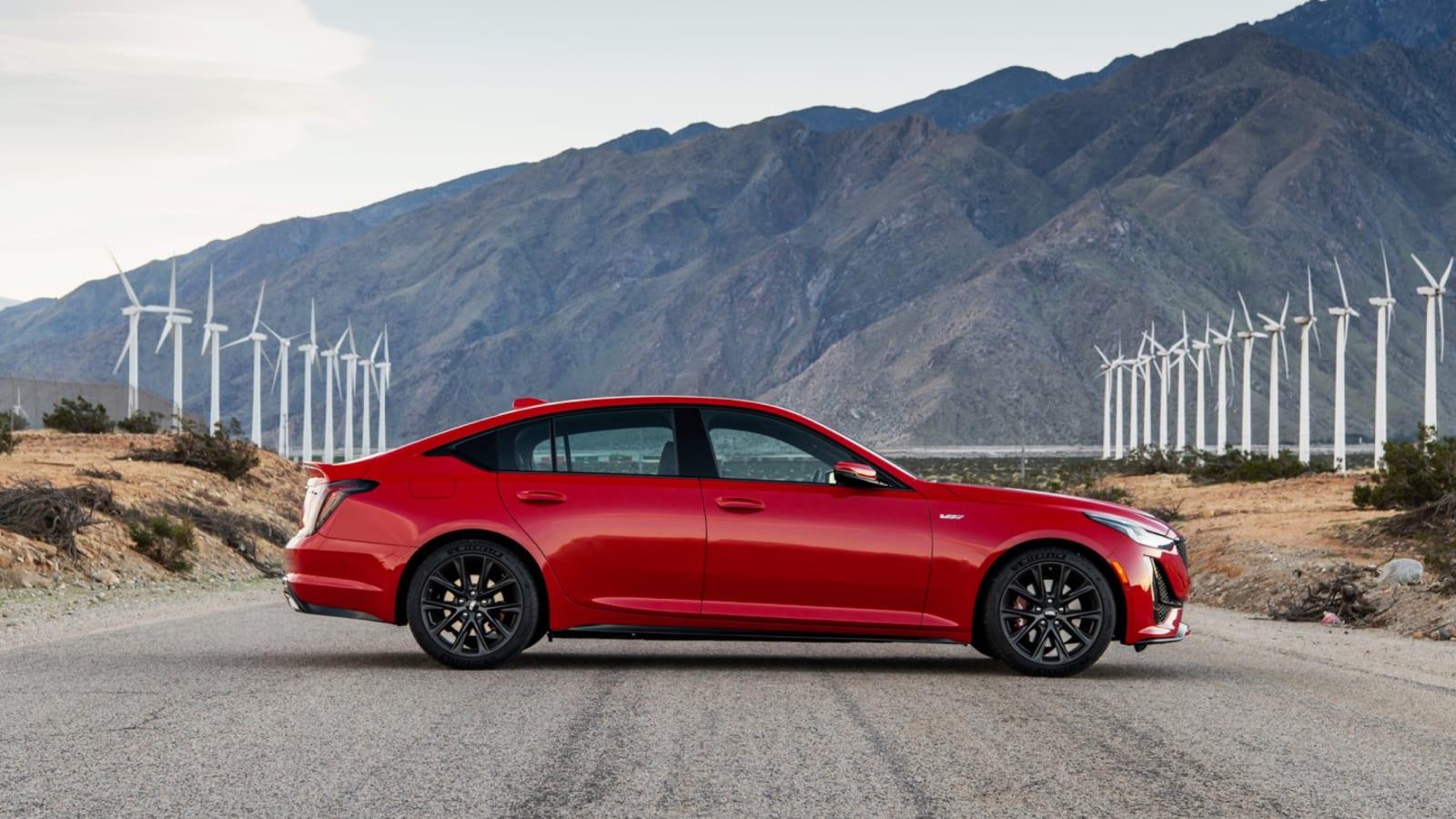 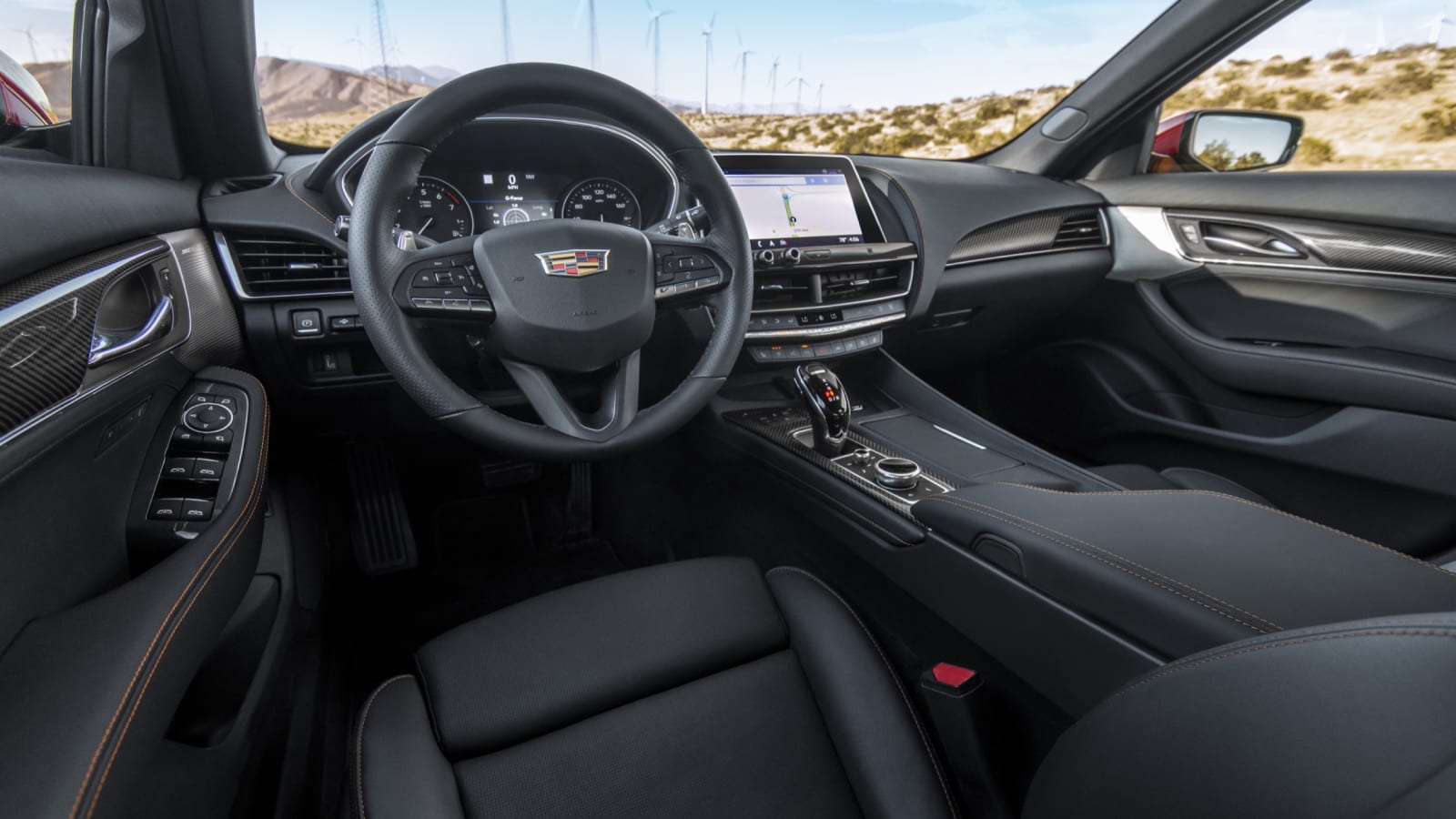 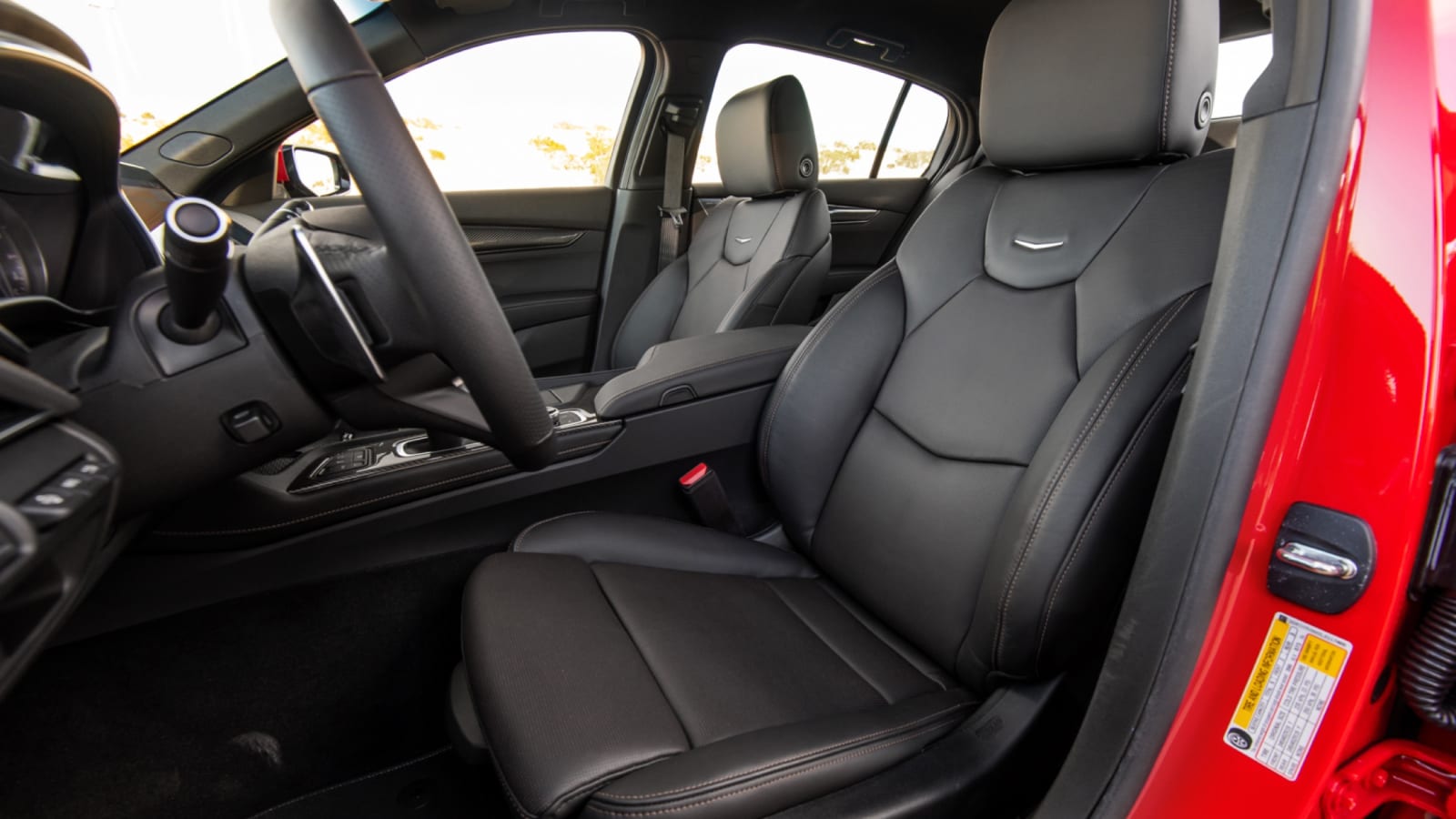 Cadillac has a brand-new infotainment system that will be launching soon in the upcoming Escalade SUV, but the CT5 sticks with the brand’s oft-maligned CUE. As much as customers and journalists like us have complained about CUE, the latest (and likely last) version found in the CT5 works pretty well. All the necessary functions are easy to find, and the touchscreen is quick and responsive. And if you really don’t like the interface, there are physical buttons for the climate control and a pair of dials for audio. An available rear camera mirror offers a wider field of view, or can be used as a regular mirror. Forward collision alert, automatic braking and pedestrian detection are standard. A 360-degree camera system, adaptive cruise control, automatic parking assist and rear auto braking are available.

At 193.8 inches long on a 116-inch wheelbase, the CT5 is a tad shorter overall than the CTS, but with a wheelbase that’s about an inch and a half longer. It’s bigger in every significant exterior dimension than the segment-defining BMW 3 Series. With the exception of 2.7 additional inches of rear legroom, which is a solid notch in the CT5’s favor, it’s about the same size inside. The most glaring surprise of the CT5 spec sheet is its tiny 11.9-cubic-foot trunk. That’s 43% less cargo space than the BMW. It’s even smaller than the trunk in the subcompact sedans like the Kia Rio and Chevy Sonic. In practical terms, CT5 owners will find it much more difficult to fit all their luggage into the Caddy than its competitors.

Like the CTS that preceded it (and the smaller ATS and upcoming CT4, not to mention the current Chevy Camaro), the CT5 rides atop an evolution of GM’s Alpha architecture. Sturdy bones are crucial for a sporting sedan, and the CT5’s stiff structure doesn’t disappoint. Standard multi-valve dampers in all non-V CT5 trims provide a comfortable ride while keeping body roll in check during hard cornering. Cadillac’s much more advanced Magnetic Ride 4.0 suspension, with high-tech brains that actively adjust damping every five milliseconds to suit current road conditions and the driver’s level of enthusiasm, comes standard on the CT5-V. 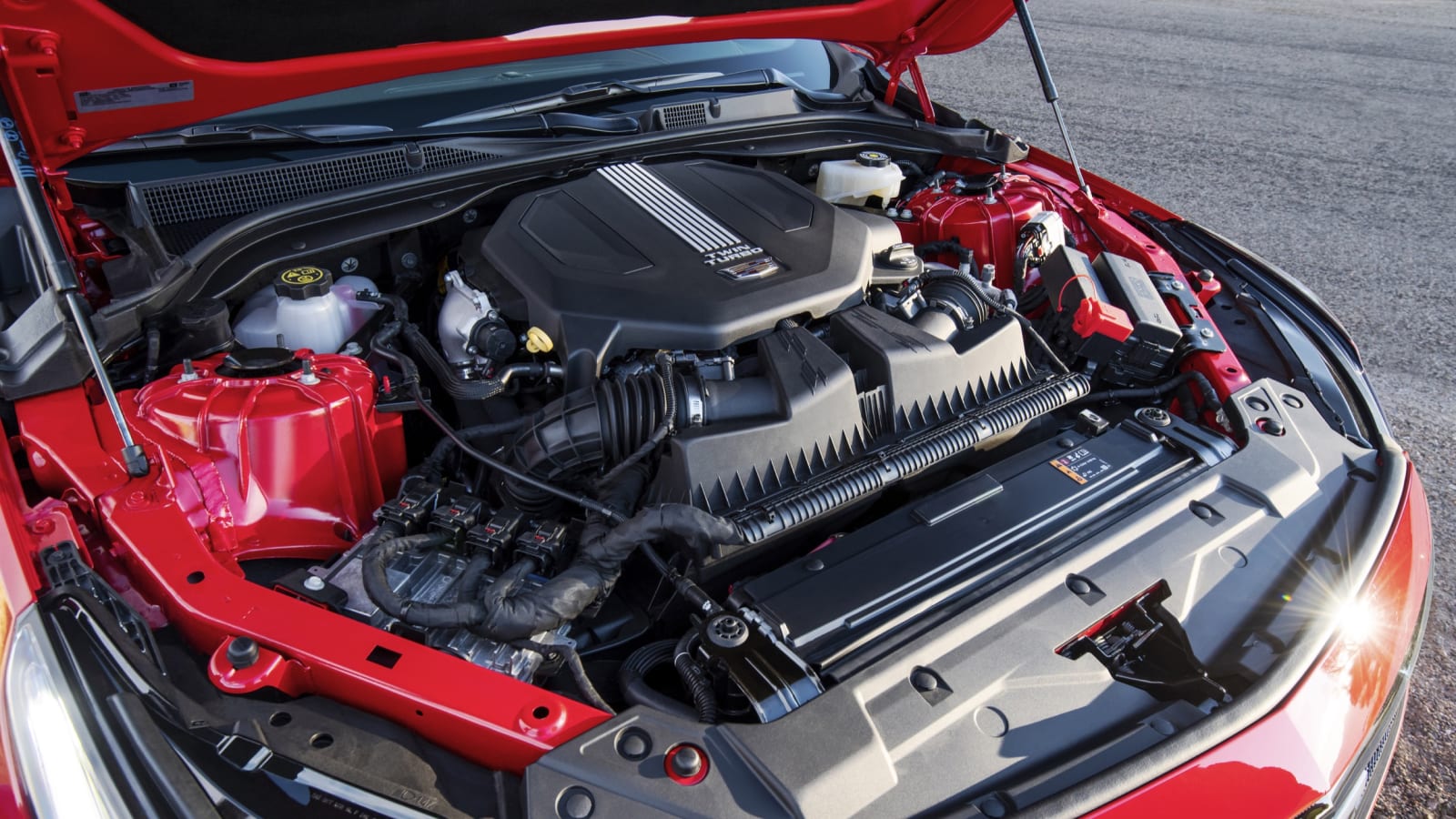 The CT5-V gets a 3.0-liter twin-turbo engine that makes 360 horsepower and 405 pound-feet of torque. In Premium Luxury trim, the same engine produces 335 hp and the same 405 lb-ft. The more powerful version separates itself from the lesser model at around 4,500 rpm, and carries those extra ponies as it approaches its redline just past 6,000 rpm. That means in most typical driving situations, there’s very little difference between the two. Cadillac estimates the CT5-V will hit 60 in 4.6 seconds, and it feels that quick from behind the wheel. The force-fed V6 gets an estimated 19 miles per gallon city, 26 highway and 21 combined.

A 2.0-liter turbocharged four-cylinder engine will be the base engine for the CT5, but we haven’t yet sampled it. We’d guess its 237 horsepower and 258 lb-ft of torque will prove adequate for buyers who care more about maximizing fuel efficiency than launching away from stoplights.

The turbocharged V6 feels a little flat right off idle — likely a combination of throttle tuning coupled with a wee bit of lag — but comes on strong after a split second of hesitation. It pulls strongly through about 5,000 rpm before tapering off as it nears its redline a little after 6,000 rpm. A 10-speed automatic is the only transmission available in the CT5 and CT5-V, and it can be shifted manually using a set of steering wheel-mounted paddles. It’s not the quickest shifter we’ve tested, but it’s smooth and feels refined.

Driver Mode Control offers Tour, Sport, and Track options (in addition to Snow/Ice and a customizable My Mode). The CT5-V gets an additional V-Mode to further customize the car. Toggling between modes alters the CT5’s transmission algorithms, steering effort and feel, and the amount of engine sound the car pumps through its audio system. Interestingly, even the brake effort and feel changes between modes, made possible by brake-by-wire technology (with a mechanical backup). 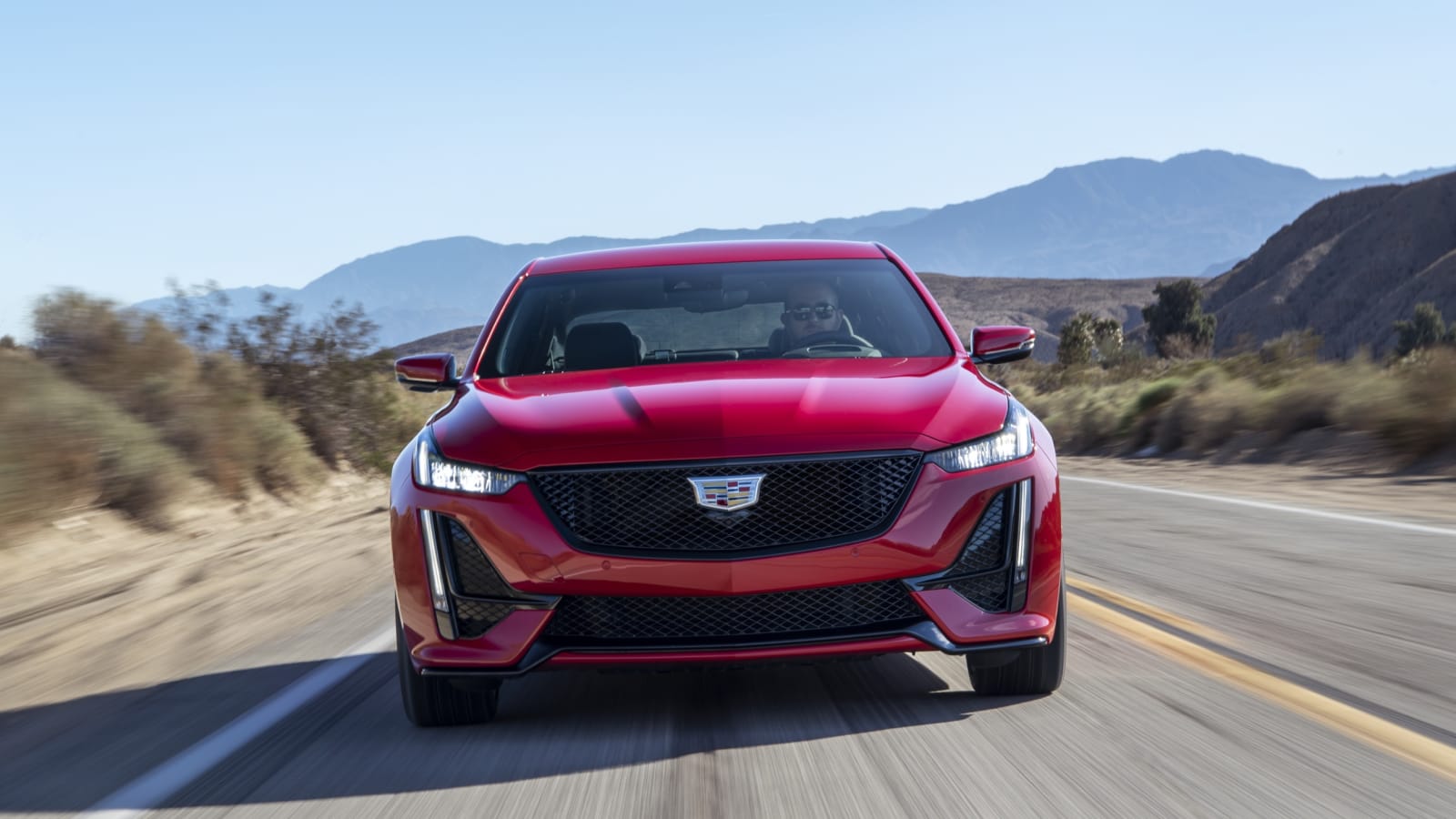 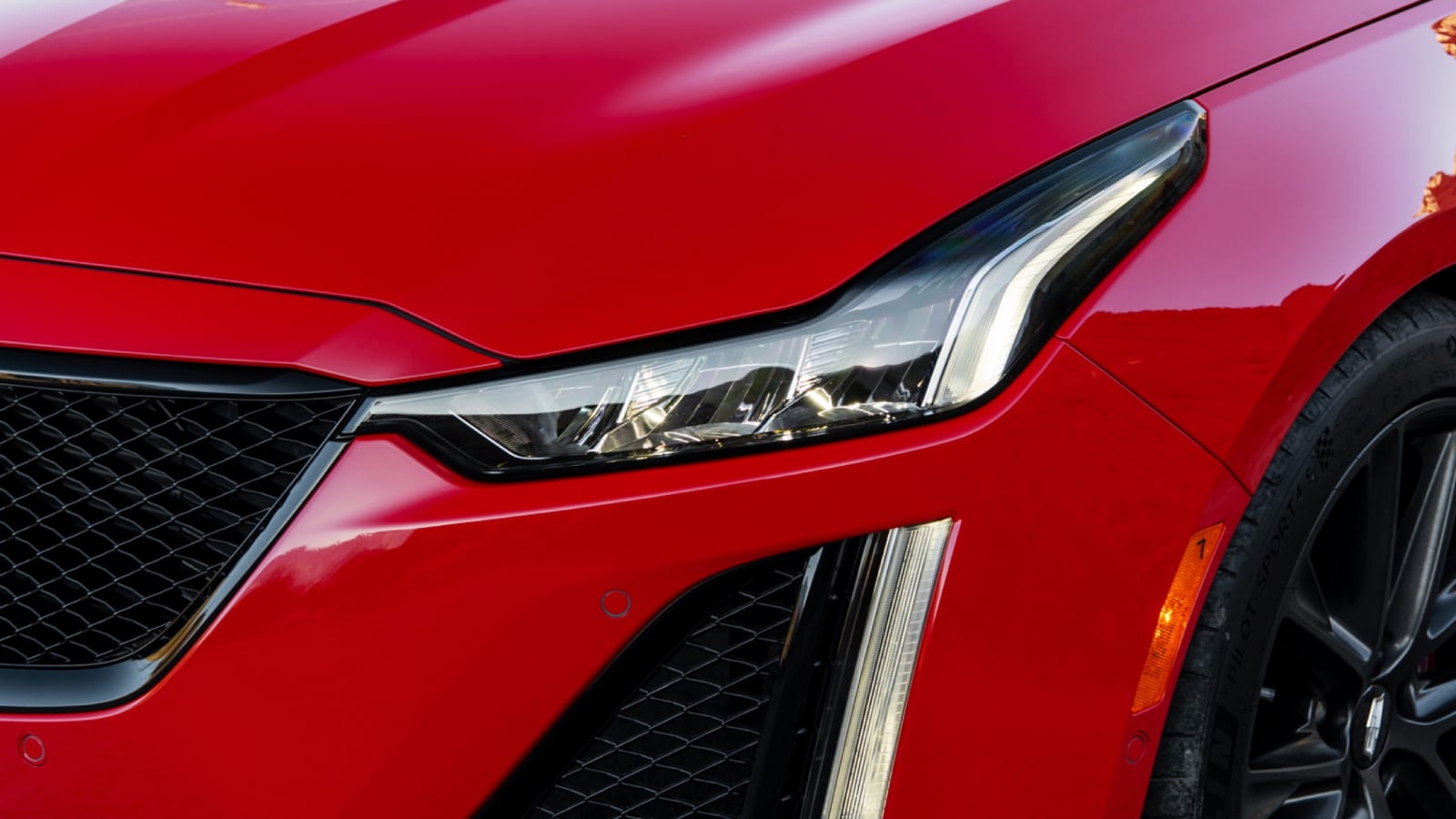 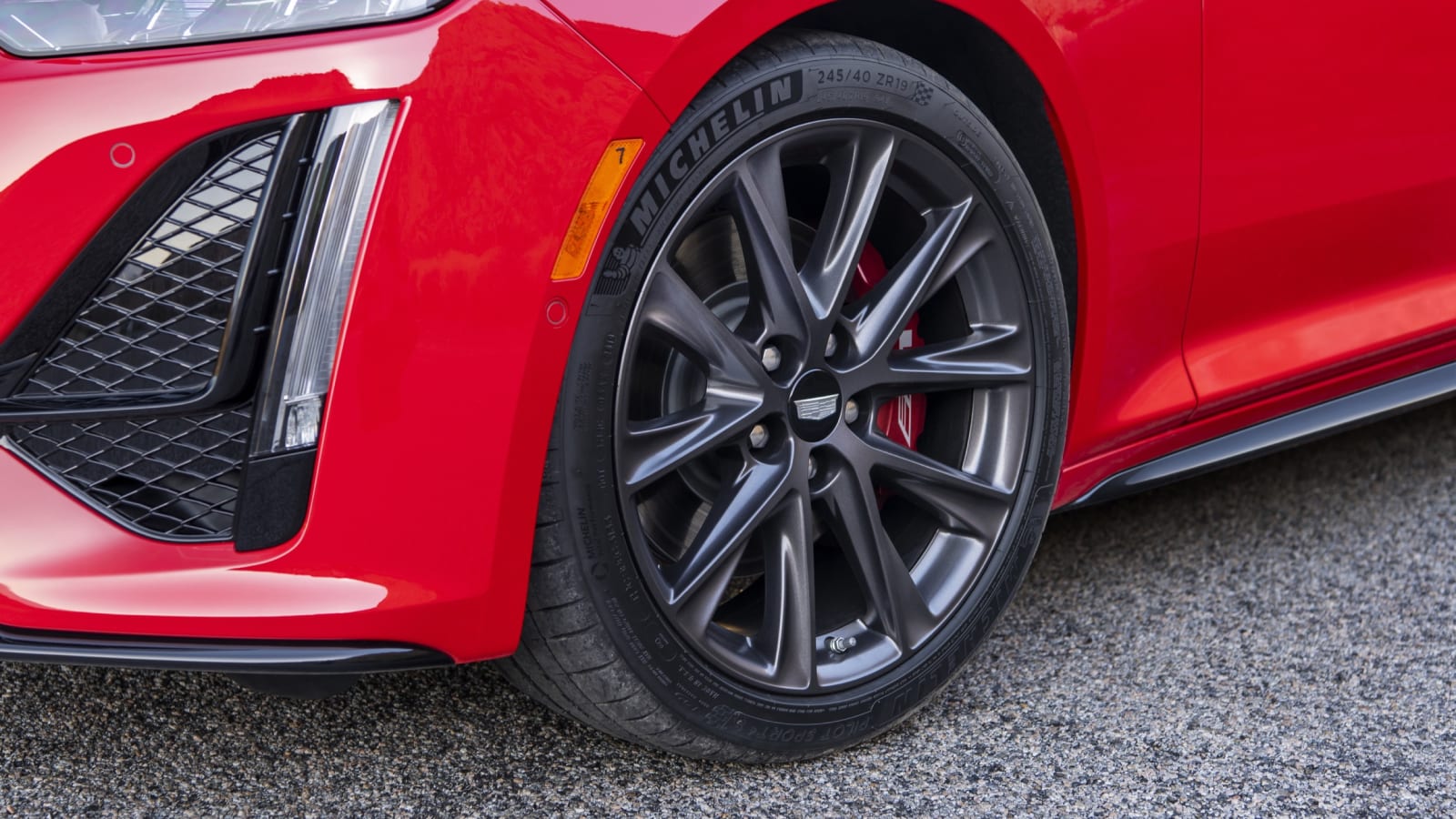 Out in the real world, the CT5-V is smooth, quiet and comfortable. It’s a bit more relaxed in Tour than Sport, as it should be, but even Sport isn’t overtly sporty. Toggling between modes doesn’t stiffen the suspension, so there’s no ride penalty. Likely due in part to Cadillac’s Active Noise Cancellation, acoustic glass and aerodynamic underbody, there isn’t much wind or road noise, and it’s firm but comfortable over broken pavement. The overall feeling is one of solidity, with no unwanted vibrations through the seats or steering wheel.

CT5-V models get Brembo braking bits up front, and they work well on the street with solid initial bite and good overall stopping power. If equipped with all-wheel drive, the front-to-rear torque split also adjusts between modes. The optional all-wheel drive does have an impact on the CT5-V’s steering feel, which in general is quite good the Sport mode we ended up defaulting to after a full day behind the wheel, but it also helps put the power down while exiting corners and, of course, over loose road surfaces.

We sampled the CT5-V at The Thermal Club outside of Palm Springs, California. We think it’s highly unlikely that CT5-V owners will actually take their mid-tier sport sedans to the race track, and this particular flavor of V isn’t going to be setting any records. Yet a few dozen laps of a short circuit did prove the Alpha-chassis CT5-V is willing to zig (cue the Zeppelin), minus a few points for some seriously smoky rear brakes after several hot laps.

We used the V button on the steering wheel and the Performance Traction Management system to maximize the car’s on-track reflexes. In Track mode, the computer nannies allow more slip than Sport. The all-wheel-drive system sends more torque to the rear wheels (85% to the rear in Track versus 80% in Tour and Sport), and will shift power around as needed to maximize available traction. We preferred the playful nature of the standard rear-drive CT5-V, even if we were probably a little quicker with all-wheel drive.

The CT5 Premium Luxury with the 3.0-liter twin-turbo V6 will cost $45,190 including a $995 destination charge. Adding all-wheel drive brings the sticker to $48,280. The higher-powered CT5-V starts at $48,690 with rear-drive or $51,290 with all-wheel drive. For comparison, the 349-hp Audi S4 starts at $50,895 with Quattro all-wheel drive. The 382-hp BMW M340i starts at $54,995 and the 385-hp Mercedes-Benz AMG C 43 tops the competitive set at $56,945. Given the options lists of these respective automakers, the Cadillac’s actual transaction prices will likely be much lower than its German competitors, meaning a real value proposition should present itself to buyers. 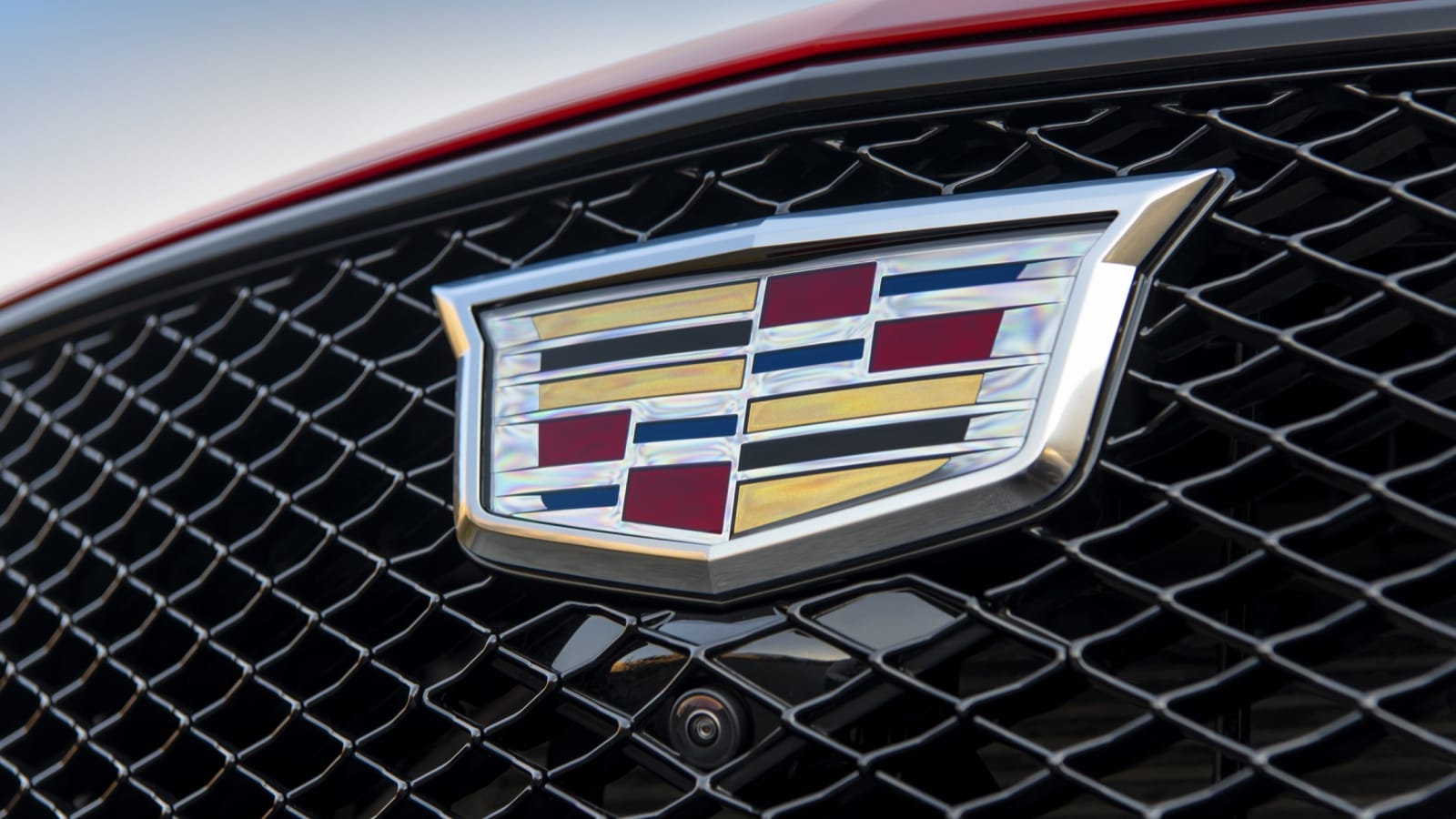 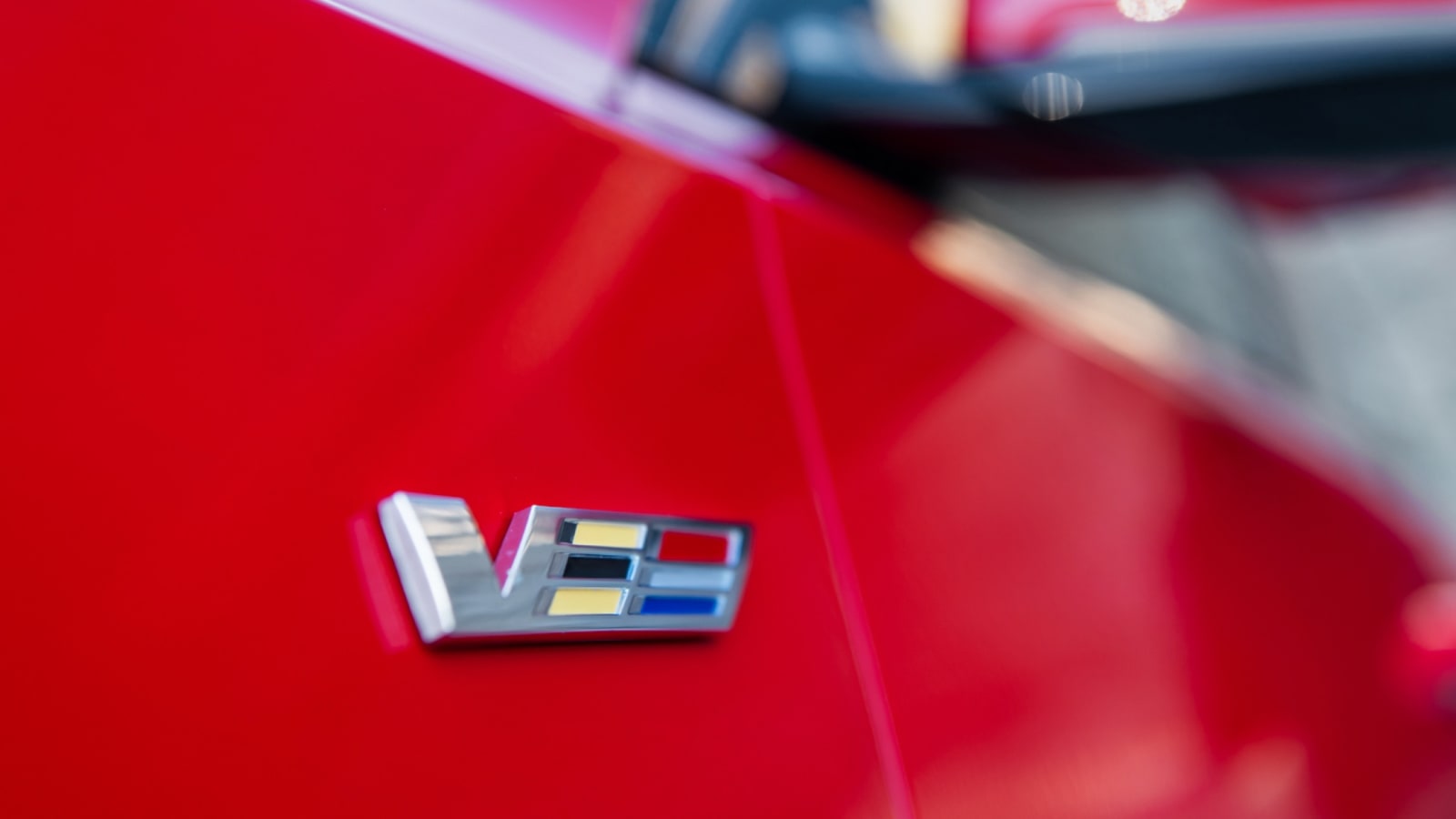 As for the confounding rollout and naming strategies, a multi-tiered approach to performance is a sensible thing to do, and it mirrors the lineups of Caddy’s aforementioned German competitors. We think it’ll all make more sense once Cadillac’s full lineup is fleshed out. And regardless of our expectations, the new 2020 Cadillac CT5-V’s excellent chassis and adequate power will be enough to keep plenty of drivers entertained. Is it a strong enough package to attract buyers who would otherwise be shopping for an Audi S4, BMW M340i or Mercedes-Benz C 43 AMG? Probably not.

Without driving the quartet back to back on the same roads and tracks, we’re not sure how they all stack up in terms of driving enjoyment. That said, our initial sense is the German competitors are more overtly sporty than this flavor of CT5-V, which comes across more as an upgraded version of the Premium Luxury than a detuned version of the departed CTS-V. Those looking for the Cadillac V experience they have been trained to expect aren’t going to find what they’re looking for in the 2020 CT5-V.

On a positive note, Cadillac’s excellent Super Cruise semi-autonomous driving technology will come to the 2021 CT5 and CT5-V, and that might be the killer app that puts the Caddy on more buyers’ lists. Failing that, we’re confident the next rung up the V-shaped ladder will bring a whole lot more horsepower and aggressiveness. And the best news of all is that the CT5’s chassis is more than up to the task of lighting up the leaderboards of race tracks the world over once that massive infusion of ponies comes to fruition.

$1,396 - $3,423 Nat'l avg. savings off MSRP
See Local Pricing
I'm not in the market for a vehicle at this time. Please move this suggestion to the side for 30 days.
Huge Savings