Finicky windows and a broken windshield send us to the dealer

Our long-term 2019 Subaru Forester has been a real workhorse in our fleet from the time we took delivery late last year. We’ve managed to rack up over 12,000 miles in the first five months — it’s been east and west of Michigan so far, but nowhere further than a day’s drive away. We’ll take it on a longer road trip soon. Since Subaru calls for 6,000-mile service intervals, our local Subaru dealer just finished up the second service call on the crossover.

Both services have housed mini-events on top of the scheduled work. Subaru changed the oil, replaced the oil filter, rotated the tires and performed a multi-point inspection on both occasions. However, the first service also involved a windshield replacement. Days before our appointment with Subaru, one editor met with a rather large stone that was kicked up on the highway. This caused a large chip in the windshield that quickly developed into a crack meandering across the passenger side of the glass. After the new glass was installed, the Subaru techs had to recalibrate its Eyesight technology so the adaptive cruise control and lane-keeping tech would work correctly. It wasn’t cheap — Subaru charges $250 for an Eyesight calibration after a new windshield is put in.

The second visit called for everything else, plus a new cabin air filter. There was a little more to the second visit than what we had planned for, though. Just a week or so prior to taking it in, the driver door window switches quit working. None of the four window switches functioned. This lasted for a few days, but it miraculously fixed itself just before our appointment with Subaru. But we noted the issue to the Subaru dealer. The techs couldn’t find anything amiss after disassembling it, and they sent us on our way. As of this writing, the windows are still functioning without issue. We’re keeping a close eye on them. 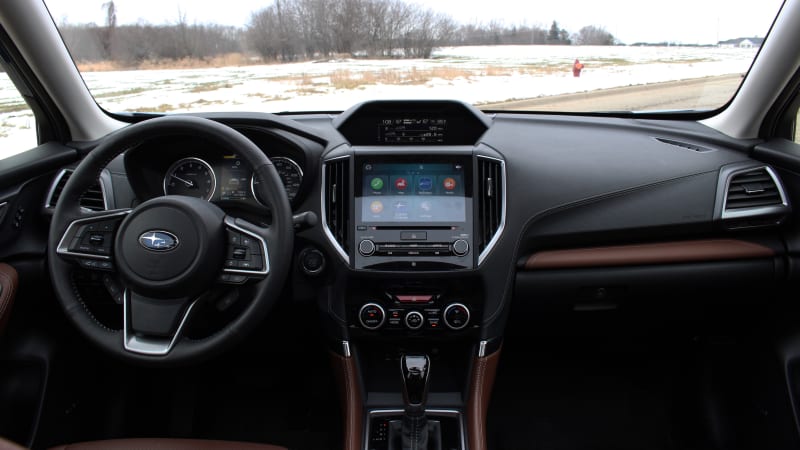 Other than the head-scratching window problem, our Forester has performed admirably. We haven’t noticed any egregious squeaks or rattles developing yet, and the 2.5-liter flat-four continues to hum along to its rather loud and thumpy beat.

Our winter tires and gold Sparco wheels have been getting attention around Michigan, too. Compliments are lobbed our way at gas stations, and one individual even asked us if we were selling. The Forester’s exterior design isn’t as interesting as it used to be, but adding gold wheels to the equation has upped the cool factor tremendously. We haven’t run into any heavy snow yet this year, but the Michelin X-Ice tires have torn up smaller snowfalls with ease and a bit of fun — there’s enough power sent to the rear end that turning off traction control actually allows for a playful rear end in snow. It’s no WRX on the slick stuff, but our Subie senses were still tingling.