The eighth-generation Golf lives up to its heritage PORTO, Portugal — Charging up the mountain roads east of the coastal city of Porto, hitting the apexes with precision, modulating the throttle delicately: it was a day of elevated driving in a car where it all comes together. Perhaps the most remarkable thing was that we weren’t driving some exotic supercar, but rather the humble (and all-new, eighth-generation) Volkswagen Golf.

Launched in 1974 as the successor to the faithful Beetle, the Golf was the best-selling car in the world for a long time. It pioneered diesel engines in the subcompact segment, spawned the quintessential hot hatch — the GTI — and the Ferdinand-Piëch-inspired fourth-generation Golf introduced unprecedented advanced technologies and workmanship. Clearly, there's a heritage to live up to.

Looking at it from the outside, you might mistake the eighth-gen car for a mere restyling of the previous generation. Even though not a single panel is carried over, the side view looks deceptively similar to the previous Golf, and the tail end is decidedly evolutionary as well. Only the front end looks sufficiently new, although the design’s friendly smile has proved to be polarizing. 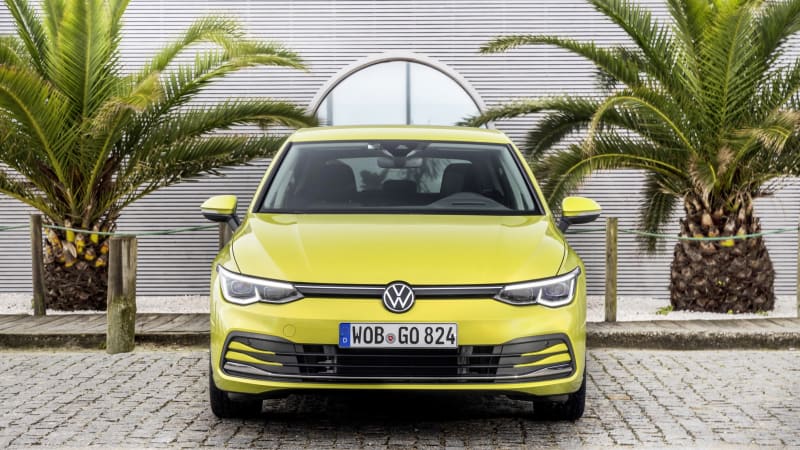 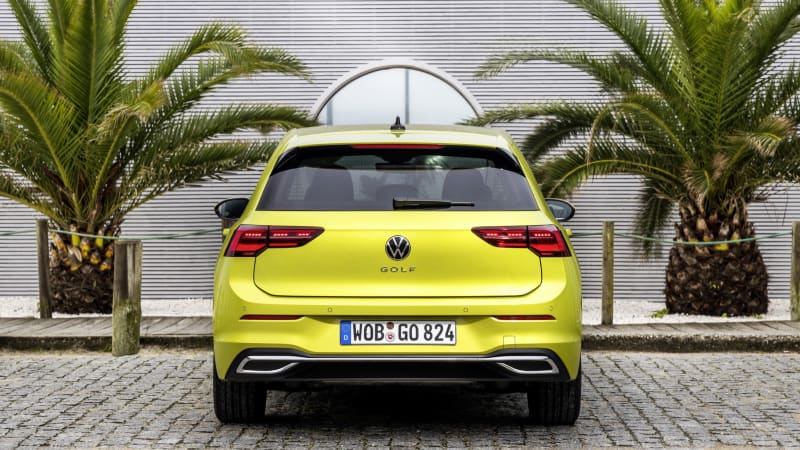 Those headlights, of course, deserve a closer look: You can specify a state-of-the-art matrix LED system that is more sophisticated than U.S. regulators currently allow. This is top-level technology, taken straight from the premium/luxury segment, and they serve as an indicator of what's hidden behind that innocent mask.

Step inside the new Golf, and fast-forward into the future: The predecessor's conventional layout has made way for a futuristic, fully digital cockpit that is standard equipment even on the lowliest of European-market Golfs. In their top-level version, the screens allow you to rearrange tiles by the touch of a finger, there is a choice between pseudo-analog gages and tiles, the navigation map can serve as background, and many functions can be activated by voice as well. The infotainment system is fast, and even though it could be more intuitive, VW is constantly improving it.

The optional ambient interior lighting system, which also adjusts the instrument color, is real eye candy, and the tall center console looks like it is taken out of a spaceship. There’s not much else we’d wish for inside, save a frameless rearview mirror like the Arteon gets, and perhaps some open-pore wood trim inside as originally envisioned by the designers. We certainly disapprove of VW axing the premium brand Dynaudio as a supplier of its stereo system in favor of the Harman/Kardon mass-market brand, too.

The Golf is one of the most-space efficient vehicles to prowl Europe’s crowded city streets. The front seats fit average-size adults perfectly, and there is enough room in the rear even for long trips. The trunk is surprisingly big for such a compact car. To ease operation in Europe's crowded cities city, the Golf is available with a full suite of assistance systems and a plethora of cameras. 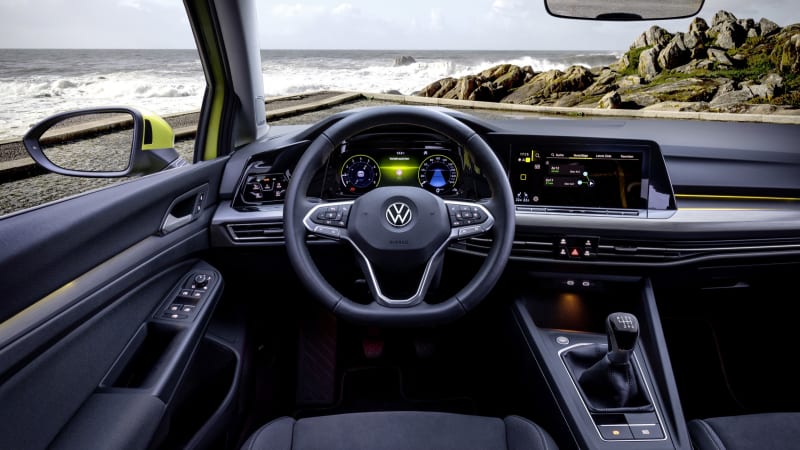 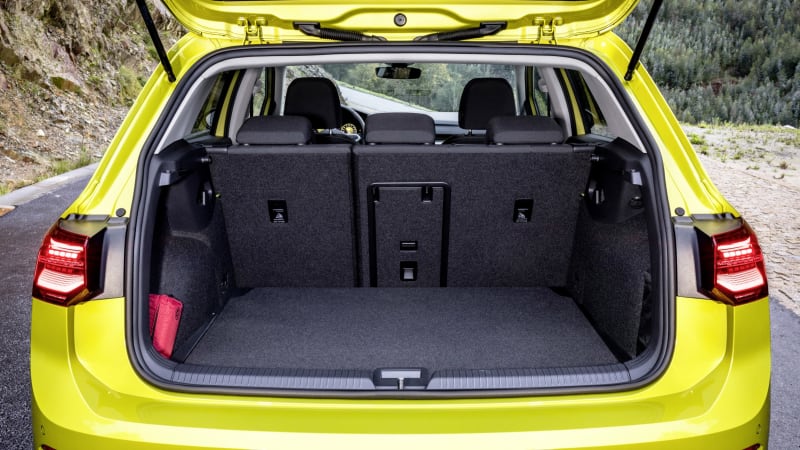 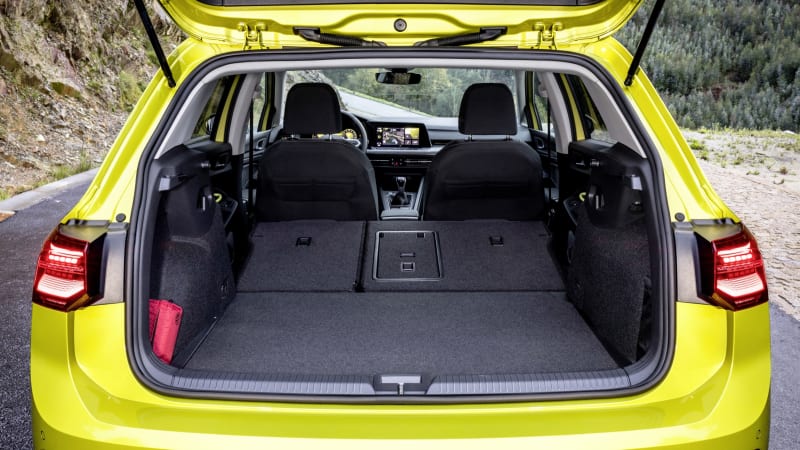 Once you leave the city, however, priorities shift. And here, the Golf demonstrates that despite the difficulties that VW is going through, it still knows how to design cars that are an absolute joy to drive. Based on the MQB modular-transversal architecture, the suspension keeps the car firmly planted on the road even on uneven and difficult surfaces. If equipped with the optional Dynamic Chassis Control (DCC), the variable dampers can be adjusted to provide a soft, comfortable experience or a firmly aggressive ride, and anything in between. The electric power steering is supremely balanced and slightly on the lighter side, refraining from a pseudo-sporty lack of assistance that we've experienced lately in BMWs.

We loved the 150-horsepower 2.0-liter TDI, an ultra-clean and efficient engine that produces a full 266 lb-ft of torque, served up from 1,750 to 3,000 rpm. A 0-62 mph sprint in 8.8 seconds sounds unremarkable, but the engine is so torquey that we were utterly satisfied by its overall performance. Top speed is a full 139 mph, thanks not least to the superior aerodynamics: The new Golf's drag coefficient is a mere 0.28. The linearity and immediacy of the diesel's response is remarkable, professionally helped by the quick and eager seven-speed dual-clutch automatic that is obligatory with this engine.

The driving experience was almost, but not quite, as good with the 150-horsepower 1.5-liter e-TSI that utilizes a starter-generator hybrid system, rated at 184 lb-ft. With a 0-62 mph sprint of 8.5 seconds, it is slightly quicker on paper, but in reality, it feels a bit more artificial in its response and less forceful in delivery. The aural experience is a matter of taste: The 1.5 TSI sounds silky and sophisticated, the 2.0 TDI emits a subdued purr. 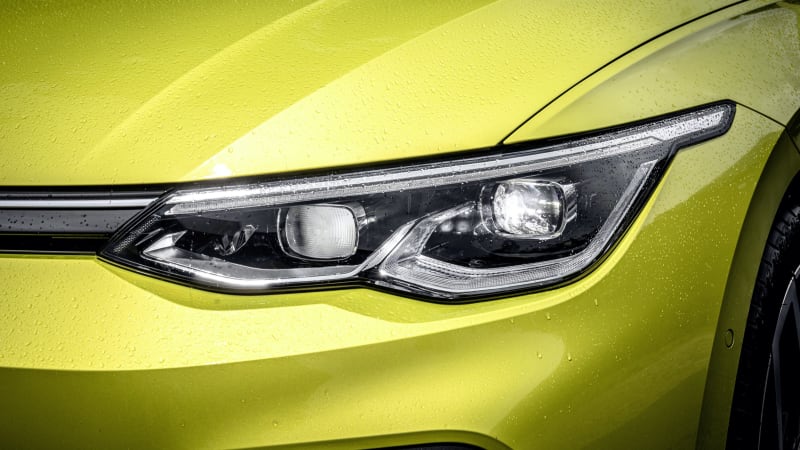 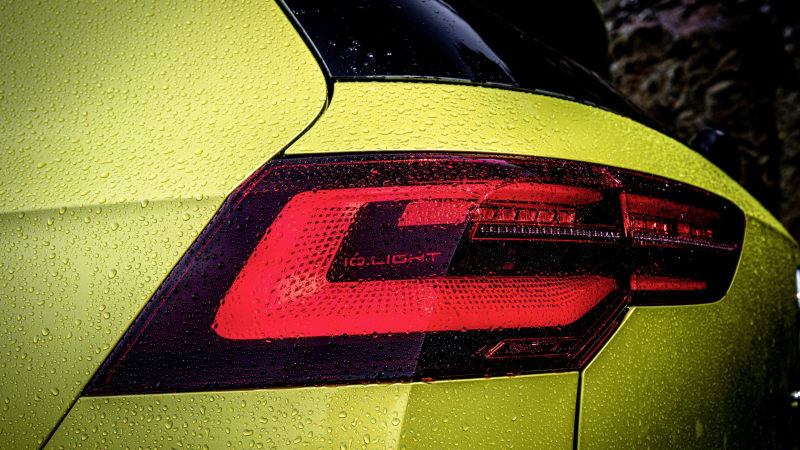 Down the road, VW will offer a plethora of other engines, beginning with a 90-horsepower 1.0-liter 3-cylinder TSI. Upmarket options will include a 200-horsepower GTD, two plug-in hybrids with the 245-horsepower GTE as the higher trim model, a new GTI that will make close to 250 horsepower, and a Golf R that produces well over 300 horsepower. Good news for enthusiasts: VW is committed to the manual. In fact, the lower versions get an entirely redesigned low-resistance box, while the GTI and the Golf R keep their well-proven units.

For now, Volkswagen has only promised the GTI and the Golf R for the U.S. market; customers of lesser Golfs will be directed to the Jetta. But we hope VW will reconsider: The 2020 Golf is not perfect, but it is the best entry in the segment — and one that will bring a smile to your face, regardless of the power level you choose.