C7 salute: The C8 Corvette has a tough act to follow UNCASVILLE, Conn. — The long-awaited, mid-engine Corvette hasn’t even been officially revealed – the red-letter day is July 18, at an airport hanger in Orange County  –  yet it can feel like the world has already moved on from the current Stingray. So, how about a little love for the seventh-generation car? Or some appreciation for how admirably it advanced the breed and carried the torch for Corvette fans? If any sports car deserves a little encore, it’s this one, marking the end of a front-engine Corvette era that began 66 years ago with 1953’s exclusively Polo White, Blue Flame inline-six-powered model.

The folks at Chevrolet were apparently thinking the same thing. And perhaps because they can’t really talk about the C8 until July 18, they put together a C7 farewell tour in Connecticut. For me, it was a welcome chance to drive critically lauded models like the mega-value Corvette Grand Sport and the supercar-baiting ZR1 for the last time. You know, front-engined cars with up to 755 horsepower that could smoke supercars around a track. Clearly, the front-engined Corvette isn’t competitive, and Chevy had to break the mold entirely …

If that doesn’t tip off where I stand, allow me to spell it out: I’m as eager as anyone to sit in and test drive the C8. But I’m not entirely buying the narrative that the current Corvette was so broken that it needed so radical a fix as a mid-engined layout, or to somehow impress Porsche or Ferrari types — who’d never be caught dead in a Corvette, regardless of where its engine sat. That said, I’m keeping an open mind, because knowing Chief Engineer Tadge Juechter and his crew, the C8 Corvette is going to rock. 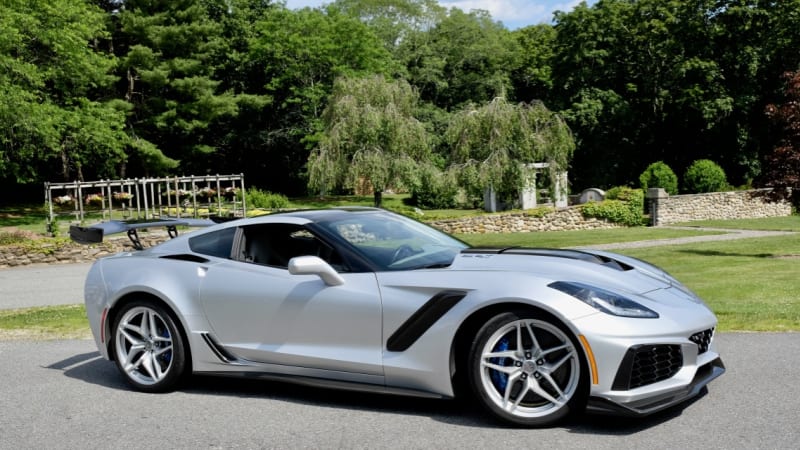 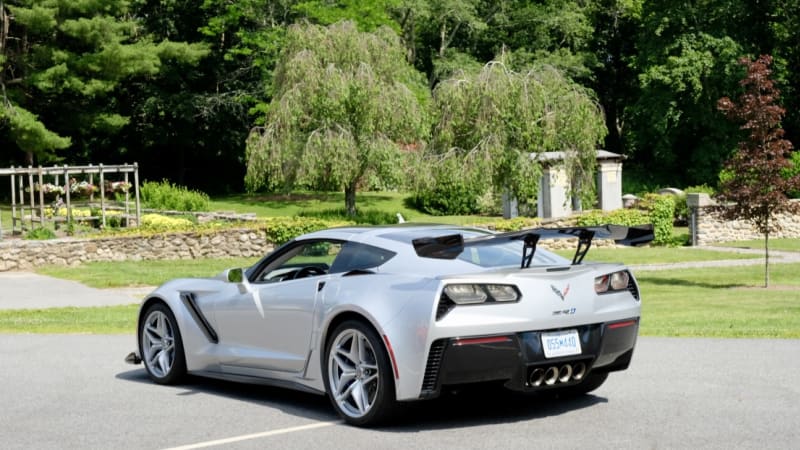 Underlining the tough act the C8 has to follow, for the first leg of the tour, keys to the mightiest C7 of them all were reserved for Autoblog: a ZR1 targa coupe, with its supercharged V8, 212-mph top speed, and sub-3.0-second scamper to 60 mph. Yes, you can also get this thing in convertible form, which I assume is like Rogaine in reverse.

Coincidentally, I had driven up from Brooklyn in a McLaren 600LT Spider. Versus the be-winged, testosterone-drip ZR1, the McLaren’s superior styling, carbon-fiber structure and markedly lower weight were countered by a “mere” 592-hp, twin-turbo V8 and an as-tested price of roughly $300,000. Since you’re asking, that compares to about $140,000 for the nearly loaded ZR1. Is the exotic McLaren a better, more-engaging sports car than the ZR1? Of course. Is it twice as good as the ZR1? Of course not.

Like a Detroit outlaw turned loose on the unsuspecting citizens of rural Connecticut, the ZR1 shreds anything in sight: The roads, its sticky Michelin Pilot Sport Cup 2 tires, any self-restraint. Dialing the Corvette’s brilliant electronic rear differential to its Track setting, and its integrated Performance Traction Management to free-birding Sport 2 level, I turn into That Guy: Squeezing or stomping the throttle in various gears – first, second, third – just to see how fast the Corvette can go and still get those tire squealing. Fresh from a few days in the McLaren, the ZR1’s steering feels mediocre in comparison: Light and uncommunicative in its mellow driving models, leaden and still uncommunicative in racier modes. But the eight-speed, torque-converter automatic transmission is the ZR1’s (or any Corvette’s) real weak link, the one piece of hardware that Chevy can replace with zero complaints from me. Gear changes are slow and indecisive, and the Corvette’s molded plastic paddle shifters don’t look or feel worthy of this superhero car. The C8’s anticipated (but not confirmed) dual-clutch automatic has us hoping for transmission performance in the range of Ferrari’s or Porsche’s industry-leading units.

Those flaws aside, don’t think for a minute that the ZR1 is just some Eaton-blown, muscle-bound oaf. First, despite that stonking, 6.2-liter LT5 engine hung over its front axle, the ZR1 doesn’t struggle much to lay power down, as long as you’re judicious with the throttle in first gear. This is a car that can run a 10.9-second quarter-mile with no need of electronic launch control. Sure, the McLaren will do the deed in 10.4, but again, that occasional blip of pleasure will cost you an extra $170,000 or so.

Tire grip (at nearly 1.2 g’s), downforce and braking are equally sensational. Learn to love and trust that lateral and decelerative grip, and the ZR1 represents public-road overkill as much as any big-money supercar. And even the ZR1, with its magnetic ride suspension and roomy cabin, feels smoother and quieter than the McLaren, whether in the city or on highways. And let’s bid a fond adieu to the Corvette’s relatively enormous, golf-bag-friendly rear hatch, soon to be replaced by the frunk found in mid- or rear-engine cars (along with, judging from spy photos, perhaps a smidge of cargo space atop the engine deck). I’m seriously worried that many traditional Corvette fans – often serious weekend road trippers, as opposed to Ferrari day-trippers – don’t yet realize what they’ll be getting into with a mid-engine car that can’t accommodate luggage or lifestyles like a familiar front-engined ‘Vette.

My driving partner and I roll the silvery ZR1 into the Mohegan Sun casino, where it’s fairly mobbed by car fans here for the televised spectacle of Barrett-Jackson auctions. Chevrolet has staged a literal curtain call for the C7 at this Barrett-Jackson Northeast weekend. The mic-wielding auctioneer performs his “yebbida bebbida stibbida SOLD” patter, amplified at Motorhead volume, perhaps to disorient attendees enough to part with their money on dreck like rivet-appliqued Jeep Wranglers and amateurish hot rods, which stick out from the worthy cars up for bid.

As we take the 100-decibel indoor stage, the auction crew rolls out a 2019 Corvette Z06. Sporting VIN #01, the first Z06 ever built in this final model year fetches $110,000, not much more than its original sticker price. But the record-setting star of the Barrett-Jackson weekend is the final C7 Corvette, slated to roll off the assembly line in Bowling Green this September. It’s represented on stage by a running replica of the black Z06 coupe, donated by Chevrolet. Proceeds benefit the Stephen Siller Foundation, which is building “smart homes” for severely disabled veterans. The final C7 brings a climactic, $2.7 million bid – a new Barrett-Jackson record for any charity sale of an OEM car – the gavel pounds, and the crowd goes wild. 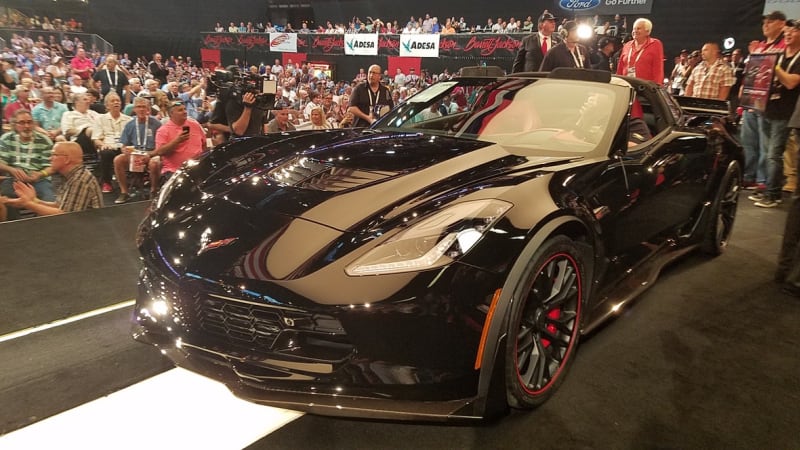 The spectacle gets me wondering: 40 years from now, which Corvettes will be more prized among collectors, the C7 or the new C8? Whatever the answer, Corvette executives are confident in the mid-engine course that’s being set. They’re not only used to constant scrutiny and second-guessing by fans, but welcome it.

Back in 2010, Chevy designer Hwasup Lee’s C7 concept sketch beat out hundreds of others, submitted from nine global GM design centers, as the inspiration for the seventh-generation car. Over dinner at a casino steakhouse, the lead exterior designer for the C7 recalls an older Corvette fan literally dragging him over to a C7 display at a customer event. The man, Lee recalls, proceeded to detail “how I’d ruined the Corvette” by eliminating its familiar round taillamps.

“There’s always pressure to live up to the legacy of the car,” Lee says. Yet Lee says he knows the Corvette team is on the right track when fans are split roughly 50/50 on their design or performance choices.

“When there’s a little bit of an uncomfortable reaction, we take that as a positive,” Lee says. “You have to lead people. You can’t give customers everything they think they want, or you go stagnant.”

Corvette marketing manager Harlan Charles, for his part, piques my curiosity by revealing that he’s been driving a C8 around Detroit, camouflaged, of course. Tagged “EX50,” it’s one of about 80 experimental builds already completed prior to the start of showroom production.

“We joke that we’re already catching up to the Ford GT” in production numbers, Charles says, smiling.

Charles listens patiently as I tick off my own concerns about the C8. He’s heard them all, naturally: That the car may end up priced too dearly for the typical, aspirational Corvette buyer, or that it won’t be roomy or versatile enough. But Charles nods when I relate what chief engineer Juechter told me years ago, that he and his team constantly worry where the next generation of Corvette buyers will come from. Most current owners, Juechter quipped, “have either gray hair or no hair.”

New blood does seem required. As Juechter planned, the C7’s robust initial sales, about 35,000 in 2014, helped rescue the Corvette from GM executives who told him – in no uncertain terms – that the Corvette must turn a profit to remain viable. But now Corvette sales (like those of most other sports cars) are tanking again, on pace for about 19,000 units this year. Despite some unsupported, wishful analysis that’s going around, only some of that can be attributed to Corvette fans “waiting” for the eighth-generation car. In fact, Corvette sales have fallen every year since the C7’s debut, including last year. To protect the franchise, Charles says another bold play was required, in the form of the oft-mythologized mid-engine Corvette. “We’re trying to take the exotic car experience, and combine it with the Corvette experience,” Charles says. “The idea is to give people everything they dream about in supercars, but in an attainable Chevrolet.”

The next morning, I roar away from Mohegan Sun in a Corvette Grand Sport, in glowering Shadow Gray Metallic paint. Starting from $66,590, the widebody, 460-hp Grand Sport has only fortified the Corvette’s rep as king of bang-for-the-buck sports cars. It’s my personal favorite among C7s, especially with the manual transmission that may become another casualty of “progress” when the C8’s final specs are revealed. Within minutes, I’m reminded of what a wonderful car the Grand Sport is: So provocative, powerful and capable, yet never opposed to a mellow cruise. As the Grand Sport turns Connecticut’s backroads into a Detroit dance party, thumping to a V8 beat, it occurs to me that the “old” GM would have let this dance turn into a sad marathon, keeping the C7 in showrooms long past its sell-by date.

I’m going to miss this C7, especially if it does become the last ‘Vette with an available stick. But like Corvette fans around the world, I’m rooting for the C8. I can’t wait to see it and drive it. Just one thing, Chevy: Please don’t screw it up.

This article has been updated to reflect that the auction record is for an OEM car.