The 2020 BMW 8 Series Gran Coupe will be officially revealed in June. In the meantime, we have something of an unofficial reveal with the above spy shots. They show what appears to be an M850i due to its big brakes and aggressive front bumper, and it's on the back of a truck with virtually no camouflage.

Impressively, the Gran Coupe really does look like a stretched version of the coupe. The entire front fascia looks almost identical with its sleek lights and wide grille. In fact, the bumper design is practically identical down to the shapes of the creases. Even along the sides, the fender vent and the lines coming off of it are clearly taken from the coupe. And the back has nearly the same taillights and bumper design. Of course the Gran Coupe is a lot longer and has two more doors. This has also led to a bit of departure with the side window design. There's a more distinct uptick in the window sill line, and it ends in a more vertical line that leaves a thicker C-pillar.

We'll see the rest of the exterior and the interior when the 8 Series Gran Coupe is officially revealed next month. Considering how close the exterior is to the coupe, the dashboard design will probably be lifted straight from the two-door, too. Engines will probably be the same as well with the M850i getting a twin-turbo 4.4-liter V8 making 523 horsepower and 553 pound-feet of torque. That engine will be coupled to an eight-speed automatic and all-wheel drive. An M8 version of this and the coupe are likely coming later. 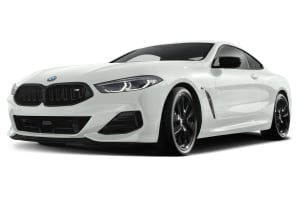 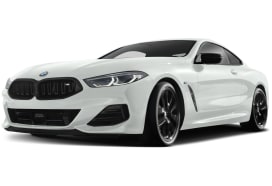