Gemballa's Avalanche is a Porsche 911 on amphetamines

German tuners can get wild too. It cannot be said that the current Porsche 911 Turbo is lacking for power. With up to 580 horsepower being fed to all four wheels, it's one of the fastest vehicles on the planet, period. That apparently wasn't enough for German tuning shop Gemballa, whose latest creation, the third-generation Avalanche, is turning out 808 horsepower and 700 lb-ft of torque from a turbocharged flat-six engine. Oh, and it's bright purple and has a three-tier rear wing that looks big enough to live in. 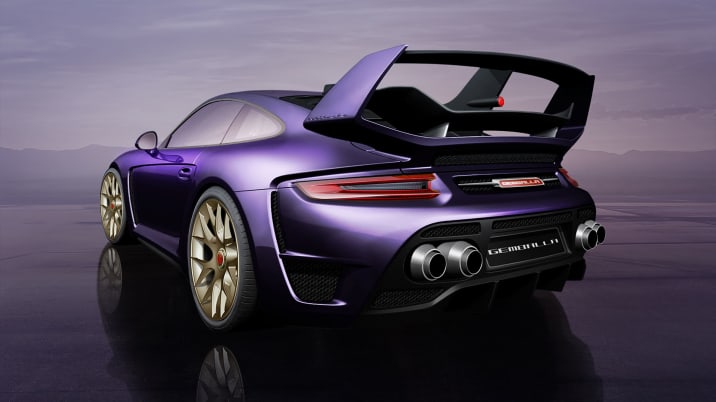 Gemballa is known for a lot of things - Nürburgring lap records, for example - but subtlety isn't one of them. All of the company's current offerings are either Porsche or McLaren models that have been worked over inside and out with new body panels, wings, and interior touches to compliment a hefty boost in power. It's not a look for everyone, but you can't say the company doesn't try.

Likewise, the new Avalanche has been thoroughly done over. Aside from the new wing, the car features new front and rear bumpers, side skirts, and touches of bare carbon fiber throughout. The new frunk lid looks to have been modeled after the one on the current Chevrolet Corvette Z06, while the exhaust pipes appear to be inspired by certain Lego kits.

The car is set to debut at this year's Geneva Motor Show in March. Despite the arrival of new models from Ferrari and McLaren, we don't think the Gemballa will have much trouble standing out from the crowd.