It's what the car says, anyway. Most automakers go out of their way to disguise new cars. There's camouflage and body cladding and if a spy photographer does get close enough to get a snap, engineers usually greet them with certain hand gestures. Aston Martin is not most automakers – instead of hiding the new DB11 Volante, it headed to the Arctic Circle in an undisguised car with a "DB11 – Opening Spring 2018" sign on each door. Subtle, guys.

The new images of the droptop DB11 should assuage the emotions of critics of the hardtop model's odd roofline. The addition of a fabric softtop improves the car's look immeasurably, giving it a much more conventional profile. Where the sloping, floating roof on the DB11 coupe fights for visual attention with the rear haunches, the convertible top is innocuous, blending in favorably with the strong line over the rear wheels. We can't wait to see this car with its roof down, because it will look stunning.

But as is the case with most convertibles, the roofline is the only place where changes happen. Below the beltline, the Volante shares its fascia and, rather unfortunately its weird side vent, with the hardtop model. And of course, the droptop is also sharing its engine with the coupe. We expect the same 5.2-liter, twin-turbocharged V12 and eight-speed automatic when the DB11 Volante debuts.

Normally, this is the point in a spy photo story where we'd speculate about when and where a new car will debut. But since Aston Martin helpfully scrawled part of that info on the side of the car, it's not really necessary. The Aston Martin DB11 Volante will debut in spring of 2018, a period that lines up neatly with the Geneva Motor Show. 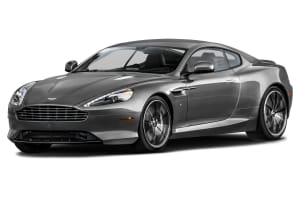