Hyundai returned to the Busan Motor Show in South Korea this past weekend with the RM16 concept, a mid-engined prototype that takes the Veloster into even more radical territory. If the idea sounds familiar to you, that's because this is the concept's third iteration. Sadly, it doesn't seem any closer to reaching production.

The project was first presented at the same show two years ago as the Veloster RM, packing a 2.0-liter turbo four behind the two-seat cockpit. The concept resurfaced last year in Seoul as the RM15 with even more extreme bodywork. And now it's back again.

The engine stays right where it was, helping give the test bed 43/57 front-rear weight distribution. This time, however, the conventional turbocharger is replaced by an electric compressor, similar to the ones you might find in the Audi SQ7 TDI or Bugatti Chiron, and there's an electronic differential to channel its 296 horsepower to the road. The RM16 uses a six-speed manual transmission.

The RM16 also features a new front end to put a fresh face on the carbon-fiber bodywork, an active rear wing, and an electronically variable exhaust. All of which is well and fine, but while the prototype is supposed to inform the forthcoming N-badged performance models, we wouldn't hold our collective breath waiting for a mid-engined hot hatch like this in Hyundai showrooms. 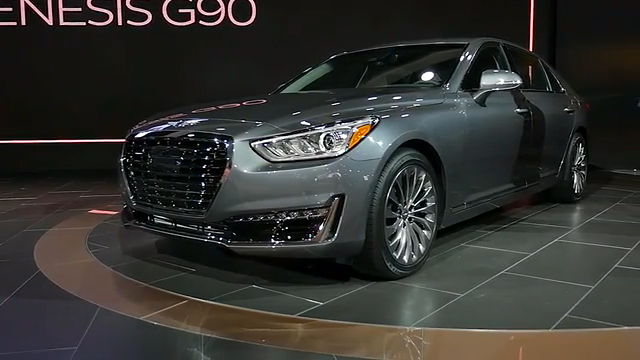 RM16
The Project RM (Racing Midship) began in 2012 with a mission to test high-performance technologies and refine them for use in future high-performance cars.
The main purpose of the Project RM is to develop core high performance technologies while focusing on performance, ultimately resulting in form following function. The RM model has developed with a 'rolling lab' concept since 2014, playing a key role in research and development of high performance future 'N' models from Hyundai Motor.
The RM16 (Racing Midship 2016) concept continues the development of high-performance technologies that started with the RM14, which was revealed at the 2014 Busan International Motor Show for the first time. Just as with the subsequent RM15, introduced at the 2015 Seoul Motor Show, RM16 represents the company's further development of high-performance technologies in the form of a mid-engine, lightweight, high-performance two-seat concept.
Albert Biermann, Head of Hyundai Motor's Vehicle Test & High-Performance Development said, "RM models will continue to play an important role as the 'rolling lab' in the development of our future high-performance 'N' cars."
Like previous RM models, the design of the RM16 is determined by its focus on performance: form follows function with styling optimized for aerodynamics. The aggressive front with low-extended hood, slim headlamps and wide air intakes sets the tone of its low and wide image, created to accommodate high performance technologies.
The latest concept inherits characteristics from the earlier RM14 and RM15 models – in particular the RM14's six-speed manual transmission and midship-mounted 2.0 theta T-GDI engine – tuned to develop 300PS. Additionally, the RM16 boasts the same sports-focused weight distribution (43% front, 57% rear), as its predecessors, benefitting from a center of gravity less than 500mm from the ground.
Weight-saving innovations, first seen on RM15, help boost the new concept's handling and acceleration. A specially-designed aluminum space frame is covered by light, rigid carbon-fiber reinforced plastic (CFRP) body panels, which save considerable weight versus a traditionally-constructed steel-based car.
Over these three RM models, there has been an evolution in aerodynamics that in turn aids stability and thermal flow, maximizing the potential offered by improved powertrain performance. New technologies have been applied, including an electric supercharger to enhance engine power and responsiveness; electronic limited slip differential (E-LSD) that distributes optimal power to each wheel when turning; and an automatically controlled rear spoiler to optimize aerodynamics according to different driving conditions.
This instinctive and visceral experience is enhanced by the electronically-variable exhaust system, which provides a powerful tone to match the sense of acceleration, while the adjustable bolster sports seat contribute to the absorbing driving experience by adapting to the driving mode and speed of cornering.

Hyundai N 2025 Vision Gran Turismo
First introduced in Frankfurt Motor Show in September 2015, Hyundai N 2025 Vision Gran Turismo was created to inspire the passion of 'N'. It is the ultimate concept car to show the global audience the brand's unique perspective on future performance characteristics.
The Hyundai N 2025 Vision Gran Turismo's powertrain is based on world's first mass-produced Hyundai hydrogen fuel cell system, highlighting Hyundai Motor's passion for performance and sustainability. The total system output is 650kW (884PS), with the dual fuel cell stacks providing 500kW (680PS), and the super capacitor system generating an additional 150kW (204PS) by using energy regeneration when braking. This unrivalled power is delivered through four high-powered, independent in-wheel motors that provide uncompromised traction and immediate response.
The compact, lightweight fuel cell stacks and rigid CFRP monocoque structure help to keep weight down to 972kg, giving it a power-to-weight ratio that rivals the most exotic supercars in the world. Combined with a low center of gravity, this power and performance sets the car up to perform on the most challenging of race tracks, encapsulating the thrilling premise of 'N' cars.
Inspired by aerodynamics and formed by speed, the Hyundai N 2025 Vision Gran Turismo looks like a jet fighter on wheels that blurs the line between air and asphalt. Hyundai Motor designed this car to appear more like a crafted machine for grounded aeronautics. So, the car actually looks like it is floating.
The Hyundai N 2025 Vision Gran Turismo will appear exclusively in 'Gran Turismo Sport' on Playstation®4 in November 2016, presenting N's future potential and the company's passion for performance to millions of people around the world through the global online community.

Hyundai Motor's technology trajectory on show at Busan
Hyundai Motor's impressive booth at the Busan International Motor Show, held at BEXCO (Busan Exhibition Center & Convention Hall) focuses on not only showcasing its high performance technologies and models, but also the direction of Hyundai Motor's future technology strategies.
The IONIQ project is an on-going research and development project of Hyundai Motor to innovate mobility for changing our lifestyles in the future. The goal of IONIQ project is to create future mobility that coexist with our lifestyles and the society. IONIQ is the first model to bear these efforts.
IONIQ is the first car to offer customers the choice of three alternative-fuel powertrains in a single body-type. IONIQ Hybrid and IONIQ Electric will be displayed in the Busan International Motor Show. IONIQ Plug-in will be introduced later this year.
Key elements of the IONIQ is shown alongside the models in full. A cut-away exhibition of the IONIQ shows the vehicle split down the middle to reveal the inner workings of the vehicle in clear view. An IONIQ home charger is also on display to show how the plug-in IONIQ models can recharge at customers' homes, while an EV 0-emission demonstrates the clean-air potential presented by the IONIQ EV, which has no tailpipe emissions (0g/km CO2).

Busan International Motor Show exhibits
Extending its focus on high performance, Hyundai Motor displays its i20 WRC joined by a WRC simulator exhibition. This WRC 4DX Virtual Experience gives visitors a lifelike taste of being behind the wheel of a Hyundai Motor rally car by using a virtual reality headset and 4D simulator. Motorsport fans can continue their rally experience by exploring displays of Hyundai motorsport technologies honed and refined by the brand's long and successful involvement in motorsport.
Woong-chul Yang, Vice Chairman and Head of Hyundai R&D Center said, "At the Busan Motor Show, Hyundai Motor demonstrates our commitment to building products with customers at heart. From the earliest stages of research and development to the final production of each of our models, we consider customer convenience and enjoyment as vital factors."
Elantra, Veloster, i40, Sonata, Azera, Aslan, Tucson, Santa Fe, Santa Fe Sport will be displayed in Hyundai Motor booth.
Hyundai Motor's press conference will take place in Exhibition Hall 1 at 11:12 (KST) on Thursday June 2, 2016.