With a starting price of $235,000, it's not what you'd typically consider a "daily driver," but as we find out, this Bentley is indeed a car you could happily live with every single day.

[00:00:00] Hey, guys. This is senior editor Steven Ewing with another Daily Driver video. I'm in a car today that you wouldn't necessarily consider to be a daily driver by the normal logic. I'm driving the $235,000 2015 Bentley Continental GT Speed Coupe. Now, as its name would suggest with the word "speed" in there at the end, this is an incredibly powerful and incredibly quick car.

[00:01:00] it's how much power is available while you're already at speed. I'm on the freeway right now and just with a light tap of the throttle there's just this massive wave of torque that comes on. It's just smooth, seamless, it's effortless. It's really, really fun. You can really get it going hot into a corner, let it hug it, and it really just grips. It's got a ton of power.

[00:01:30] It's a really nice-handling car. A lot of people tend to think of Bentleys as being cars that you're driven in. You picture a Mulsanne pulling up with a chauffeur, but that's not the case with the Continental. In fact, Bentley's done a lot of work in recent years to drive home the point that the Continental is the driver's car. You look at things like the GT V8 S, which is one of my favorite Bentleys they've ever produced, where it's a car that despite its heft and its size and all of that, it's

[00:02:00] still pretty involving. The chassis tuning is really good. The steering's pretty good. It's actually a good to drive car. On top of that, it's incredibly quiet in here. There's a little bit of tire noise but I think that has to do with the fact that this car is equipped with Dunlop Winter Sport tires, which is good considering the weather conditions. The fact that it's all-wheel drive kind of makes this an interesting four season car, too. Of course, though, this being a Bentley, and as you would expect for the price,

[00:02:30] you get nothing short of the best refinement and best create comforts in here. Everything is wrapped in leather and it's all nicely hand-stitched. There's even little details like the stitching on the paddle shifters. It's just so intricate and so well done. You can really tell that this whole thing was put together by hand. Obviously, with the $235,000 price tag, the 2015 Continental GT Speed is kind of out of the realm of most people in terms of being a daily driver, but look at it this way:

[00:03:00] It's quiet, it's comfortable, it's got a ton of power, it looks amazing, and it's actually really good in all four seasons. If I had the means, I'd drive one every day. For Autoblog, I'm Steven Ewing. Thanks for watching. 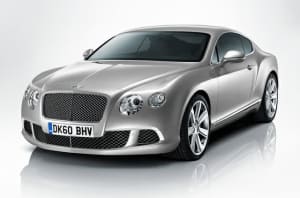