No matter how much Cadillac revitalizes its lineup and its image, it seems that all consumers want is the Escalade. In fact, Automotive News reports that General Motors can't keep up with demand for the fullsize luxury SUV, despite sticker prices that start at over $70,000 and approach six figures at the top end of the spectrum.

Contrast that with sedans like the ATS and CTS, which are far cheaper but which Cadillac hasn't been able to move fast enough to keep up with production, prompting both the manufacturer and dealers to offer substantial incentives to keep them from piling up.

Cadillac had been resisting a price cut of the ATS or CTS, lest it hurt resale values – itself a factor that could explain consumers' reluctance to buy them in the first place – but been offering subsidized leases, discounted financing, rebates and cheaper options. Combined with incentives from individual dealers, according to AN, buyers can be looking at five-figure discounts on buying a new Cadillac sedan. And now, finally, it seems the CTS will indeed get a little bit off its bottom line.

Yet GM has been producing the ATS and CTS at rates that their sales can't keep up with. The automaker was forced to idle the plant in Lansing, MI, where it assembles the ATS and CTS for six weeks starting this past December. And since it reopened late in January, it's been reduced to a single shift as dealers try to move the metal they've already got.

Meanwhile the plant in Arlington, TX, that produces the Escalade and its Chevy and GMC siblings has been running on overtime, with three shifts throughout the week and even into the weekend to keep up with demand.

Profitable as it's been for Cadillac and GM, though, the Escalade does not represent the future of where it wants to take the brand - separating the Escalade as almost a brand unto itself that's been left out of the company's new naming scheme. If only it could make its sedans as successful as its fullsize SUVs, it'll be all set. 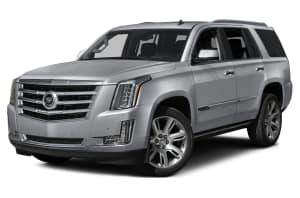