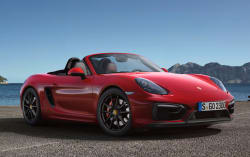 Porsche has issued a "precautionary" and voluntary safety recall affecting some 4,400 sports cars across the globe. Here in the United States, the recall includes 1,382 911, Boxster convertibles and Cayman coupes, all of which are from model years 2014 and 2015.

Porsche will be replacing the lock bracket for the front cargo area (the frunk) after internal testing revealed that, while the vehicles meet "strength requirements," specific parts might not meet the company's quality standards throughout the vehicle's life. There have been no reports of accidents or injuries.

Owners of the affected cars will be notified within 60 days and will need to report to a nearby dealer for a free repair, which should take about 30 minutes.

Atlanta. As a precautionary measure, Porsche is conducting a voluntary safety recall to replace the lock bracket on the front hood of 4,428 two-door sports cars worldwide, of which 1,382 are in the United States. The affected vehicles are limited to model year 2014 and 2015 911, Boxster, and Cayman vehicles. Ongoing internal quality inspection procedures found that while these vehicles pass all current strength requirements, it was determined that these specific parts may not meet Porsche-specific quality standards throughout the life cycle of the vehicle. No incidents, accidents, or injuries have been reported to Porsche, nor any instances of an unintentional opening of the front hood.

The issue was discovered during routine in-house quality checks and was immediately corrected in production. The owners of the identified vehicles will be notified within 60 days. These customers will be asked to make an appointment as soon as possible with their authorized Porsche dealer to have the recall performed. No costs will be incurred to replace this part, and the appointment will take approximately half an hour.