These cars go honk in the night.

Erin Marquis
Any kid lucky enough to grow up in Detroit is familiar with the Henry Ford Museum. It's huge, full of shiny things and a great place to take a child and let them burn off some energy. After several field trips and weekend outings however, the dusty concept vehicles and famous aircraft tend to lose their punch for youngsters. As a fifth grader, I was already gazing on the museum's many gems with glassy eyes. On yet another school trip, we made our way to John F. Kennedy's death car, a gleaming black Lincoln limo. The aging volunteer docent told our little group something I had never heard before.

"You know, this car is haunted. Several employees have reported seeing a gray presence right here," he said, pointing to the back passenger side seat.

I perked up. Now here was something I had never heard before. A haunted car? Sure, it happened in Goosebumps, but this was real life. It made sense, in a way. Cars can be violent, emotional places. That's certainly the case with JFK's limo, as well as the other four cars on this list. And maybe those gut-wrenching deaths can permanently doom a car.
5. Archduke Franz Ferdinand's Graf & Stift Death Limo 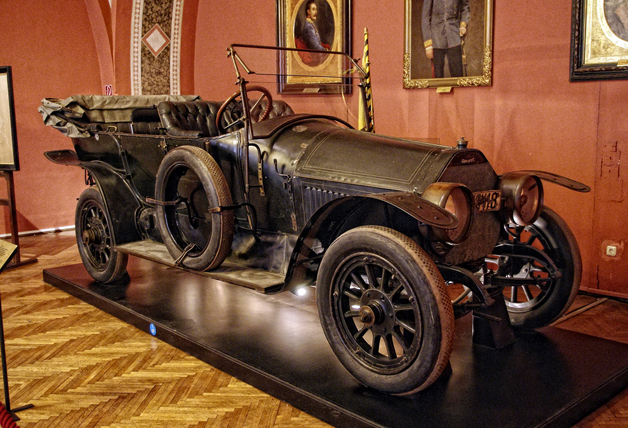 World War I tends to be a forgotten war, despite being pretty terrible in its own right and setting the stage for the entire 20th Century. The French forces, for instance, lost more lives in the first month of WWI than the US did in the entire Civil War. Everyone who has been through a freshman world history course knows the conflict started when Archduke Franz Ferdinand and his wife were shot by a Bosnian anarchist. The crazy thing is, Ferdinand had already avoided an attempt on his life that day, and was actually on his way to the hospital to comfort those who had been injured in the crossfire. One of the would-be assassins simply walked out of a cafe and saw his intended target sitting in front of him where the open-air limo had stalled. The archduke and his wife were shot through their heads and throats. Their deaths would not be the last caused by the limo.

Throughout the war and into the 1920s, the limo was owned by fifteen different people and involved in six accidents and thirteen deaths, not counting the 17 million or so killed in the war triggered by the Archduke's assassination. The first person to own the car after the Archduke was an Austrian general named Potiorek, who went insane while riding in the car through Vienna. It took four car accidents and the loss of an arm to convince its next owner, a governor of Yugoslavia, that the car was bad luck. He sold it to a surgeon friend who died six months later in a crash. Next, a captain in the German army died while trying to avoid two pedestrians. All three were killed. Car accidents and suicides would go on to claim several more lives until 1926, when it ended up in the War History Museum of Vienna.
4. Surrey, England's Ghost Crash 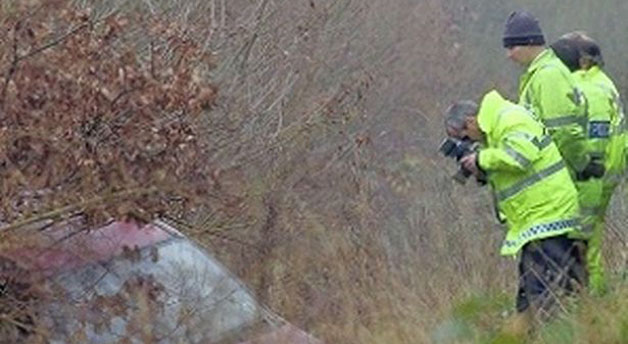 This one is straight out of a campfire story. Crashes are common on Britain's A3 highway, so when police received multiple calls on December 11, 2002 about a set of headlights veering off the road, they rushed to the scene fearing the worst. When they arrived however, no crash was evident. Undeterred, police continued to search the scene until they stumbled upon a wrecked maroon Vauxhall Astra, nose-down in a ditch, covered in undergrowth, with a decomposing human body inside.

The car had left the road and ended up in the ravine. Police estimated the young man crashed five months earlier and could find no evidence that any other car had been involved. Was the soul of this departed motorist drawing attention to his final resting place with ghostly headlights? Our gut says maybe.
3. The Jumping Car Of Cape Town 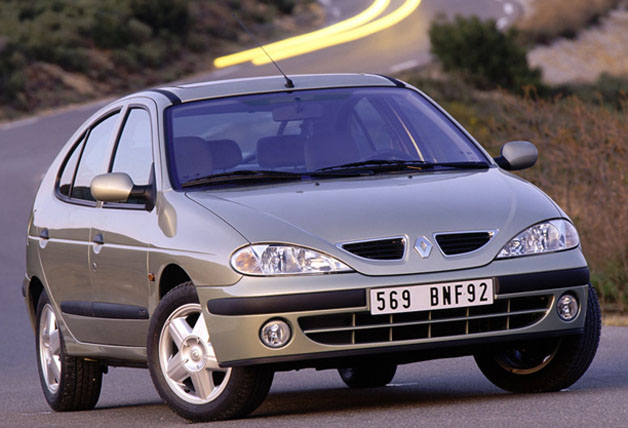 On a sultry night in South Africa in 2004, a Renault Megane turned itself on and began jumping backwards, all on its own. This car is remarkable because there were multiple witnesses and news reports. Nine people, including two police officers, apparently heard the Megane's engine start before it "jumped" backwards twice uphill, according to News24. The technical coordinator of Renault in Cape Town was very suspicious of the story at the time, and even suggested the owners were drunk. The car apparently roared to life on its own, despite having no keys in the ignition and the parking brake engaged.

Renault later blamed the car's odd behavior on a rusty starter cable, which could have caused the car to short circuit and start on its own. The company couldn't explain the revving engine, as if someone, or something, had their foot on the gas...
2. John F. Kennedy's Limousine SS-100-X 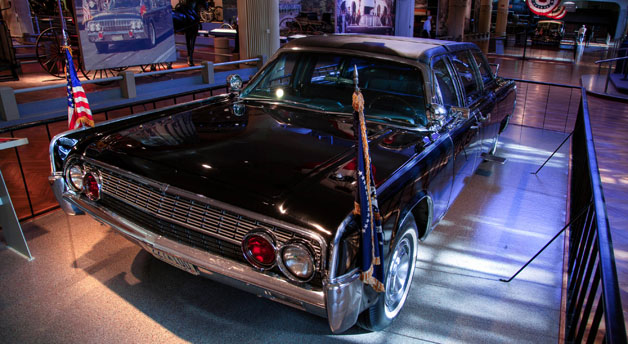 This car is said to be haunted by a former president, but it might as well have the specter of Franz Ferdinand hanging around with a sign reading "history repeats itself." The SS-100-X was the Secret Service name given to President John F. Kennedy's navy blue 1961 Lincoln 74A Convertible. The Lincoln featured $200,000 worth of modifications, but oddly enough, no bulletproofing. There were several domes that fit over the top of the convertible, but all made the cabin extremely hot, without adding any real protection.

It was in this Lincoln that Kennedy, First Lady Jacqueline Kennedy, the Texas governor and his wife sat in on November 22, 1963, when three shots fired from a book depository ended the President's life.

Surprisingly, the Lincoln was kept in service another eight years after Kennedy's death. A company called Hess & Eisenhardt added reinforcements and safety measures that were missing when Kennedy rode in the car, apparently much to the chagrin of the president's ghost. The Lincoln was outfitted with titanium armor plating, bullet-resistant glass, and a permanent bulletproof roof. It was also painted black by incoming president Lyndon Johnson, who thought the original navy blue paint would be too reminiscent of the assassination. In 1967 the presidential limo was replaced, but the 1961 Lincoln was kept in the fleet for less important duties, until it retired to the Henry Ford Museum in Dearborn, MI, in 1978. The car is still on display there and is rumored to be haunted. An apparition dressed in grey has been seen standing near the car, especially in late November.
1. James Dean's Porsche 500 Spyder, "Little Bastard" 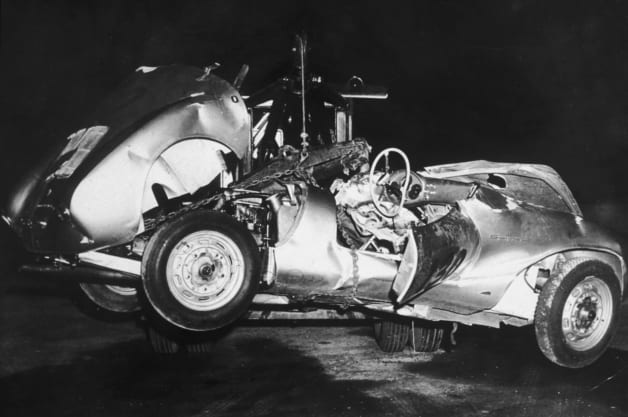 Definitely one of the most famous and well-documented cases of creepy cars, is the one that witnessed James Dean's death. Actor James Dean loved racing, and his love ultimately caused his demise. In a horrific accident on his way to a race in Salinas, CA, Dean's Porsche 550 Spyder lost control and flipped into a gully, killing Dean and severely injuring his passenger. The car dubbed "Little Bastard" by the actor would be nothing but bad luck after Dean's death.

Dean's friend and famous car customizer George Barris took the remains of the Spyder and sold parts out to other drivers. Barris sold the engine and drivetrain to two doctors who entered cars carrying the parts in the same race in Pomona, CA. During the race both crashed horribly, and one of the doctors was killed.

Barris eventually began to believe in the curse and gave the car to the California Highway Patrol. They attempted to display Dean's car as a warning to careless drivers, but more bad luck followed. The first place it was displayed was a garage, which promptly burned down, leaving only Little Bastard standing in the smoldering debris. On its way to a high school, Little Bastard broke free from the truck hauling it and cause another fatal accident. CHP moved it to a stand at yet another high school, where the car fell and broke a student's hip. While in transit, the Spyder fell off of its trailer a total of three times, crushing a truck driver. The car also injured two thieves who tried to pry out the steering wheel and bloodstained seats.

Finally, the CHP had had enough of Little Bastard and attempted to return the wreckage to Barris, but it vanished mysteriously of the back of a flatbed truck en-route and hasn't been seen since.
X