Stop us if you've heard this one: According to Autocar, the current generation will be the last Mitsubishi Evolution we will ever see.

That, while unfortunate for driving enthusiasts, is a reality we've had plenty of time to digest. The days of wanton fuel burning for the sake of speed and power will soon come to an end. But that doesn't mean the days of performance have to die, too. "Green is still fun to drive," said Mitsubishi UK boss Lance Bradley in a conversation with Autocar. "It's a challenge to make it fun, but not a particularly difficult one. Electric vehicle performance is very good."

So, should we expect a new hybrid sedan to take up the mantle left by the Evo? Not so much. The British magazine quotes Kanenori Okamoto of Mitsubishi as saying, "It will be replaced in spirit by an SUV with high performance," which will apparently incorporate lessons learned in the automaker's efforts at Pikes Peak. The Mitsubishi MiEV Evolution III, which handily broke the EV record at the famed mountain course, will donate much of its high-performance, zero-emissions technology to the project, including its Super All Wheel Control four-wheel-drive system.

What's more, Mitsubishi reps hint that the hi-po EV goodness will spread across the rest of its line, where possible and appropriate, and that means Mitsubishi-loving driving enthusiasts may actually have something to look forward to. 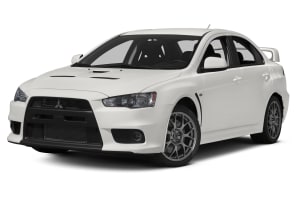