Noah Joseph
Historically speaking, attempts to make amphibious vehicles have typically not caught on. That's what makes Gibbs Sports Amphibians such an exception. It's given us the Aquada roadster, the Humdinga truck and the Quadski ATV. Customers who wanted the latter but wanted to take a friend along for the ride, however, may have been disappointed by the Quadski's solo seat, but now Gibbs has followed up with the new Quadski XL. 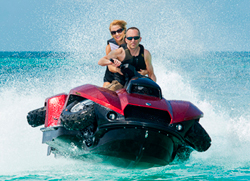 With nearly a foot of extra wheelbase, the Quadski XL packs seating for two along with more storage, all the while offering a more comfortable ride on land and increased stability on the water. Like the existing Quadski, the new XL is built around a composite hull with a 1.3-liter four-cylinder motorbike engine from BMW Motorrad producing 140 horsepower to propel the amphibian to a top speed of 45 miles per hour – on land or water.

While it was at it, Gibbs also improved the rudders, air scoops and bumpers on both the one-seat Quadski and the two-seat Quadski XL. Both models incorporate some 300 patents (and patents pending) and are available at a network of dealers spanning 15 states. Scope out the details in the press release and video below.

AUBURN HILLS, Mich., June 24, 2014 /PRNewswire/ -- The Gibbs Quadski, the world's first high-speed sports amphibian, gets a new front-end appearance and a Quadski XL model added to its lineup for 2014.

Compared to the standard Quadski, the new Quadski XL offers seating for two; has 11.8 inches of additional wheelbase; is nearly a foot longer and offers increased storage capacity as well.

"The new Quadski XL expands the envelope of go-anywhere recreation with an even greater capacity for freedom, flexibility and fun," notes Noel Lane, president and CEO of Gibbs Sports Amphibians. "Our dealers are excited about the addition of the XL to their high-speed amphibian line-up."

He points out that both 2014 Quadski models have larger sponsons (stationary rudders) integrated into their hulls to provide added stability and help improve overall marine handling.

Both models have durable, light-weight composite hulls; utilize patented water-jet technology, and are equipped with a 1.3-liter BMW Motorrad engine and transmission. The four-cylinder, water-cooled engine is considered the lightest power plant in its segment and features electronic fuel injection, dual overhead camshafts and dry-sump lubrication. Producing 140 horsepower, the engine enables Quadski and Quadski XL to reach speeds of 45 mph on both land and water.

"Our high-speed amphibians feature a unique retractable suspension system that provides a superb ride and nimble handling on land, and retracts in seconds after entering water," Lane adds. "It's a patented design that allows Quadski to transition between the two environments in less than five seconds.

"Quadski attracted crowds at auto, boat and powersports shows throughout the U.S. last year. We expect to build on that success this summer with the addition of our new Quadski XL – a two-seater that research indicates will be popular with an even greater number of prospective buyers."

Built at a 54,000-square-foot assembly plant in Auburn Hills, the Quadski is available in four colors – red, yellow, silver and blue. Custom colors also are available, including "camouflage," at extra cost.

The Quadski XL has an overall length of 140.2 inches, compared to 128.3 inches for a standard Quadski. Its curb weight of 1,437 pounds is about 100 pounds heavier and its wheelbase of 82.3 inches is nearly a foot longer.

"The Quadski is the result of millions of research dollars and years of development work in the U.S., the U.K. and New Zealand," says Alan Gibbs, founder of Gibbs Technologies and Gibbs Sports Amphibians. "Quadski represents an entirely new form of transportation. It is the only sports amphibian of its kind in the world."

Gibbs notes that his companies have more than 300 patents and patents pending on Gibbs technology and have invested more than $220 million in product and technology development.

"Bringing the Quadski to market in the U.S. over the past 18 months has been a long, uphill battle, but clearly worth the effort," Gibbs adds. "We expect the Quadski to pave the way for a host of other Gibbs amphibians that are in our pipeline and designed for consumers, sports enthusiasts, law enforcement agencies and first responders in the years to come."

Gibbs Sports Amphibians Inc. is the world's leading manufacturer of personal sports amphibians for consumer, commercial and humanitarian applications, with 23 dealers (including 33 retail stores) throughout the United States and 14 international distributors. More information about Gibbs and its HSA technology can be found at www.gibbssports.com.