Keeping up its from-all-angles approach to efficiency, Toyota has found yet another way to eke out up to ten percent more precious MPGs in its hybrid vehicles, this time electronically. The automaker has announced the development of new silicon carbide (SiC) power semiconductors for use in power control units, which it will begin testing on Japanese roads within the next year. 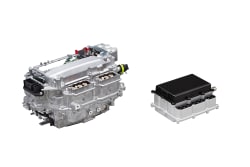 The PCU using the silicon carbide compound offers less electrical resistance, which improves efficiency when passing current between the battery and electric motor. It also loses less power after shutting off, and can operate at a higher frequency. The net power loss of the new PCU is just one-tenth of the current silicone-only version (the latter accounting for 20 percent of total electrical power loss in today's hybrids). The result, so far, is a claimed five-percent improvement in fuel economy in test vehicles, with the potential of ten percent by the time the new SiC power semiconductor comes to market.

Additionally, the carbide wafers allow for smaller a power module, coil and capacitor, thus allowing the entire PCU to be 80 percent smaller (see the side-by-side comparison in the accompanying photo, which you can click to enlarge).

We've got a while to wait before we start to see the carbide technology to start making a real-world impact. Toyota aims to begin using the SiC units in 2020. By then, with improvements in the company's other key efficiency factors - engine technology and aerodynamics - cars like the Prius will likely see significant gains in fuel economy. Read more in the press release below.
Show full PR text
Toyota Develops 'Diamond-like' Computer Chips to Boost Hybrid Mileage

Toyota City, Japan – Toyota is using one of the hardest materials in nature after diamonds to develop a semiconductor chip it hopes will improve the fuel efficiency of its hybrids, such as the Prius, by as much at 10 percent. The company and its partners announced today that they have developed a silicon carbide (SiC) power semiconductor for use in automotive power control units. Toyota plans to begin test-driving vehicles with the technology on public roads in Japan within a year. The chips, made from carbide - one of the hardest materials in nature, theoretically have superior characteristics such as one-tenth the electrical power loss and 10 times the drive frequency. Toyota said the chips would also allow it to reduce the size of current automotive power control units by 80 percent. The automaker said it has already achieved a 5 percent improvement in fuel efficiency in test vehicles and aims to commercialize the technology by 2020. The new chips, along with improved engines and aerodynamics, are key steps the company is taking to continue advancing hybrid powertrains, a technology it pioneered nearly 17 years ago.