View All Specs
The subject of what makes up a true " supercar" is a difficult one, fraught with personal connotations and the rare ability to bring close colleagues into heated confrontation with one another in the blink of an eye. I say this because, while the 2014 Audi RS7 most certainly does not make the supercar cut on a few levels to my way of thinking – not rare enough, expensive enough or wearing an appropriately evocative body – it is unquestionably an "everyday supercar" of remarkable ability. And, pertinently, it is one that proved willing to ply its trade in every version of winter that Michigan had to offer it.

I had winter four ways during my week-long loan with the RS7. A period of crisp temperatures and dry roads, presided over by light blue skies as wide as the horizon, soon gave way to spitting, freezing rain blanketed in slightly misleading warmer air. Then there was snow. Not the massive blanket we saw in the first week of the New Year, but more than enough to see my neighbors stocking up on Ice Melt and replacing their shovels for the season. Finally, temperatures dropped to the mid teens, cottony snow compressed into a hard pack and all residual moisture on the mostly cleared roads morphed into the very slickest of ice. Timeless curses were uttered by cranky commuters in smoking breaths. Pure Michigan. 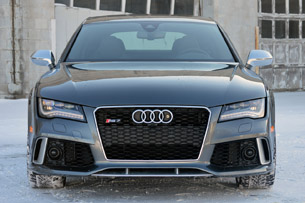 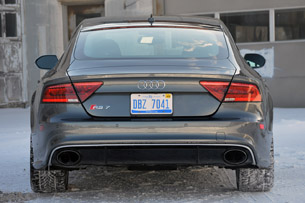 The RS7 out accelerates the base R8. Cain and Abel on an automotive scale.

Look at the bona fides of the strapping liftback (or wagon, or hatchback, the A7 bodystyle still impugns easy categorization), and tell me it isn't pretty damn super. A twin-turbocharged, 4.0-liter V8 engine lives under the front bonnet of the RS7, crouched and ready to dispense all of its 560 horsepower and 516 pound-feet of torque with one committed foot flex.

Delivered to the front and rear wheels via Audi's oft-ballyhooed Quattro system, and making smart use of a rear differential, all that power lets the RS7 careen from a standing start to 60 miles per hour in just 3.8 seconds. Checking for in-house supremacy: that acceleration figure makes the two-plus-ton Audi quicker to hit 60 than all but a handful of members of the R8 range.

Let me repeat that for clarity and impact: the RS7 out accelerates the base R8. Cain and Abel on an automotive scale. 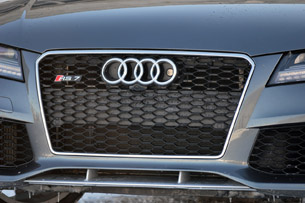 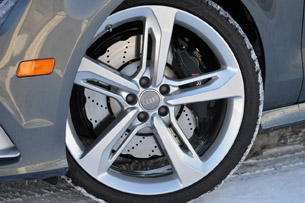 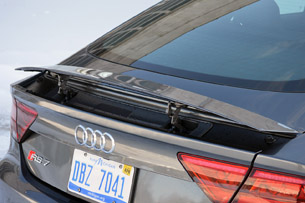 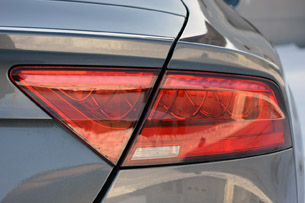 Listen to the basso voice and rumbling exhaust in the stripped down driving video below.

On a human level, the force of a full-throttle start in the long-roof Audi is strong enough to make drivers or passengers (depending on their predilections and strength of character): curse, cover their eyes, laugh out loud, pump their fists or otherwise express physically that something out of the ordinary is going on.

Fitted as my car was with the sport exhaust system (a $1,000 option you'd better spend if you're already stacking cash high enough to buy this car), believe me when I say there's no ordinary sound emanating from this beast at speed, either. The basso voice and rumbling exhaust may not sing like your average exotic, but they certainly put one in the mind of fast driving as the decibels rise. In fact, I liked the experience so much that I rounded up our talented film crew to put together a stripped down driving video of the car. Listen away.

The RS7 merely continued on about its business when many similarly quick cars were rendered all but useless.

On the mostly dry, ice-free and happily twisted roads you glimpse above, the beefy Audi impressed me almost as much with its tractable handling as it had up to that point with its dominating powertrain. The sheer grip of the car in the dry, even riding on Dunlop SP Winter Sport 3D rubber, made pushing quickly through aggressive corners a simple point-and-shoot task. The RS7 is unquestionably a heavy vehicle, and hardly one that "nips" over a winding road, but the steering response is fast enough that keeping pace with that brutish engine is almost no problem at all. Some measure of real steering feel wouldn't go amiss here – the RS7 offers very little feedback – but the slightly numb rack doesn't truly hinder the sporting experience on a sub-track level.

Where this non-traditional, quasi-supercar really comes into its own, however, is when the roads under-tire are anything but clear and dry.

When Ann Arbor started to be assaulted by the kind of snow and ice that renders many similarly quick cars all but useless, the RS7 merely continued on about its business. Pushing through accumulating inches of precipitate proved to be barely a chore for the sure-footed sportback, though it's probably fair to say that its ground-hugging ride height would have stymied it in the truly deep stuff. Further, the seasonally appropriate tires and Quattro system teamed up to give me exceptional traction as the snow turned silently to ice. Even at posted speeds (with plenty of distance between myself and other cars – I'm no fool) the RS7 swallowed miles during far from ideal freeway surface conditions. 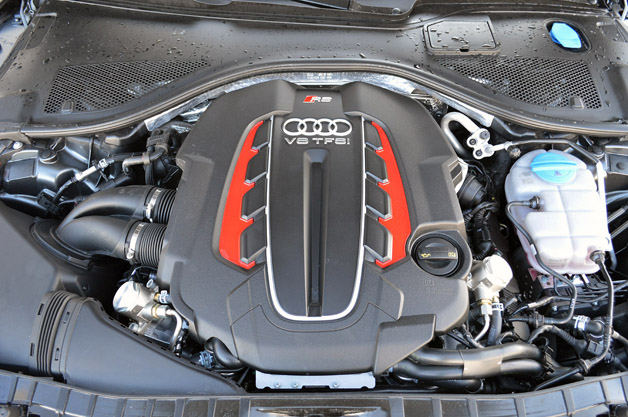 Safe as a bank vault in adverse conditions and fast as a stabbed rat in good ones.

The other very practical aspect of this exotic vehicle is the unfailingly useful rear area. Accessed by that huge liftback, the cargo area of the RS7 gladly made room for all of the crap I'd assembled to bring to a family Christmas party, with room to spare. It's a rare vehicle that will make grocery runs so painless while also accommodating so many styles of driving – safe as a bank vault in adverse conditions and fast as a stabbed rat in good ones.

If the load-lugging capacity of the RS7 hatch doesn't scream "super" to you, the rest of the appointments in my very-well-optioned tester might still change your mind.

I'll admit that the combination of the diamond-pattern quilting on the cosseting bucket seats and the "Layered Aluminum / Black wood inlays" stretching across the dash was a lot to take in. Even in the nearly monochromatic colorway, there was little question that this Audi was fully pimped. Still, the gangster-suit ethos was wrought with typical Audi attention to detail, and every piece of leather, metal and wood that I laid my fingers on felt as though it was crafted to really last.

As expected, in an RS7 or any of the A7 family really, the evocative cabin offered a ridiculous suite of in-car tech, too. There were a few pricy selections on the fat specification list for this car, headlined by a $5,900 Bang & Olufsen sound system and the $2,800 Innovation Package that adds a head-up display and night vision. But the bulk of the Audi tech found in the RS7 comes as standard. Powered sunroof and tailgate; heated, 12-way adjustable front seats; MMI and touch pad controls; navigation; rear camera and park assist; in-car WiFi; keyless entry and push-button start and tons more. Even old Kubla Khan himself never had it so good.

Owing to its extreme performance and versatility there are only a few vehicles in existence that one might fairly cross-shop with this mighty Audi. The Porsche Panamera comes closest to the RS7 combination of huge power, AWD-handling, sticker price and form factor, but won't match up with the Audi on all of those parameters. You can buy an all-wheel-drive Panamera for a lot less than the RS7's starting price of about $105k, but to get a Porsche that also has close to the same horsepower, you'll need to pony up more than $140k for a turbocharged-V8 model (and you'll still be down by 40 ponies). 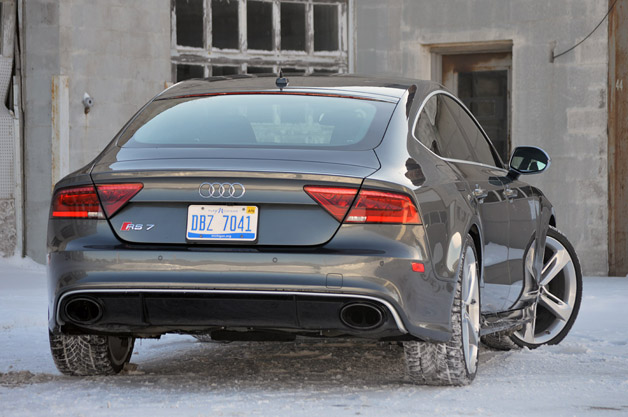 Audi has created the best version to-date of its laudable A7.

The closest competitor outright is the new Mercedes-Benz E63 AMG S 4Matic wagon – that of the 577-horsepower biturbo V8 engine and 3.6-second 0-60 sprint – a car we're pretty gaga over. The price is right, starting at about $105k, though we'll freely admit that the ample Benz rear quarters aren't as universally loved as the Audi's pert ass.

When my RS7 week was drawn to a close, hundreds of miles added gleefully to the clock and an unsanctionable amount of road salt flung onto those mammoth wheels, it's safe to say I came away impressed. Audi has created the best version to-date of its laudable A7 in this Rennsport reworking, with a car that merits strong consideration as the finest thing the brand currently sells in America. Four kinds of Michigan winter met four stirring responses from the RS7 – a supercar with sensibilities that even a Midwesterner could love. 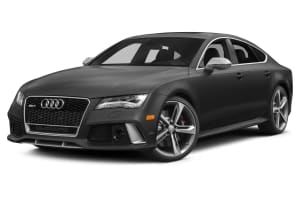