Sebastian Blanco
If nothing has changed, then how come something changed? That's the question behind the recent drop from five to four stars in the crash test rating for the Toyota Prius. As you can see on the National Highway Traffic Safety Administration ( NHTSA) website, the 2014 Prius gets four stars overall while the 2013 got five. The two cars are basically identical, so what gives?


Toyota says it is not sure why NHTSA rated the Prius a four this time.

Starting with the 2011 model year, NHTSA updated its rating system and says in a FAQ that vehicles that had four- or five-star ratings could get lower ratings "even if no changes have been made to the vehicle." Green Car Reports says that the issue is a new set of frontal barrier tests that were conducted on the 2014 Prius last month and that resulted in the first new bits of crash test data for the car in years. The 2012 and 2013 Prius models were rated based on tests done in February 2011 on a 2011 Prius. All of these are variants of the third-generation model. The next-gen Prius is expected in 2015.

There have been no changes in the test standards and no changes in the car, other than minor reinforcement for small overlap crash test which we believe did not compromise integrity. We are not sure why it rated a 4 this time. We are looking at the test results and we are confident the new generation will move back to 5 stars.

2014 Prius still has a five-star rating for the side crash test and four in the rollover test. 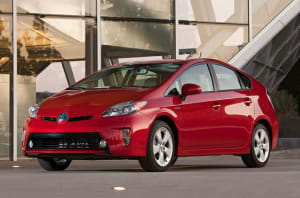