How the 2012 Toyota Camry Hybrid differs from its predecessor

Eric Loveday
Reborn for 2012, the Camry Hybrid utilizes a heavily revised version of Toyota's Hybrid Synergy Drive that is coupled to a 2.5-liter four-cylinder engine and returns fuel economy ratings of 43/39/41 (city/highway/combined), a sure-to-be-noticed improvement over the 2011 gas-electric Camry's rating of 31 miles per gallon city and 35 mpg highway. Aside from that, the 2012 Camry Hybrid puts out 200 horsepower (versus 187 hp for last year's gas-electric Camry) and gets a price cut of $1,000, give or take.

Is there anything else that sets the 2012 Toyota Camry Hybrid apart from its predecessor? Sure. The 2012 version features several minute modifications that the casual observer might not even notice. For example, the 2012 Camry Hybrid has more space in the boot for your golf clubs and the 2.5-liter gasser features modified intake and exhaust manifolds that allow the engine to breathe a bit better.

Lucky for us there are individuals like Joseph Telmo, senior administrator of Toyota Motor Sales, who can detail all the revisions that distinguish the 2012 Camry Hybrid from last year's gas-electric Camry. So, hit the jump to listen to Toyota's Telmo talk up the changes that he says make the 2012 hybrid superior to its predecessor. 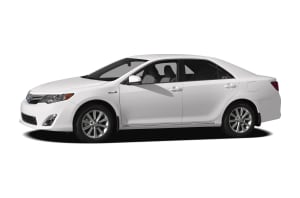