We hope it gets the five-cylinder engine Not long ago, Audi revealed the completely redesigned Q3, a compact crossover that will represent the smallest example available in the U.S. The company has only shown the regular Q3 version, but it appears to be hard at work on the ultra-fast 2020 Audi RS Q3. It has the typical visual upgrades you'd expect for an RS Audi, and we hope it's packing a special engine.

Starting with the styling, the RS Q3 doesn't deviate too much from the regular crossover's chiseled sheetmetal. But the front fascia gets an extra dose of ferocity thanks to much larger and more open outboard grilles. Every grille opening is filled with a geometric mesh with plenty of facets that add depth. At the back, the rear bumper has been smoothed out, and it now has two openings that house twin oval tailpipes, as is the RS tradition.

We're hoping that those tailpipes are coupled to the turbocharged 2.5-liter inline-five engine that's shared with the TT RS and RS3. We're big fans of the unique sound and the 400 horsepower the engine produces. It also seems a reasonable choice since the last RS Q3 used the engine, albeit with less power. It's also an engine that has been certified for use in American cars, so the company already knows how to make it legal here.

On that note, we hope that Audi actually offers the RS Q3 in the U.S. The last iterations never made it to our shores. But with crossovers hotter than ever, and with the new one feeling much more up-to-date, it seems like a logical choice for America. Since the regular Q3 is going on sale here this summer, we expect we'll see the RS Q3 revealed, no matter where it's offered, within the year. 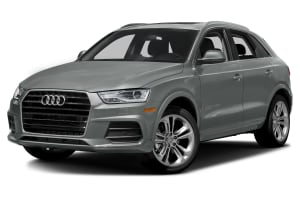