The Track Edition comes off as a glorified $32,000 Sport Package

THERMAL, Calif. — It's been more than 10 years since Lexus launched its high-performance F models. Ten years. After a full decade you'd think Toyota's luxury division would have it figured out by now, but the 2020 Lexus RC F Track Edition isn't the hardcore machine we were hoping for.

Maybe our expectations were too high. We saw its lackluster specs at the Detroit Auto Show in January, but you just never know until you get behind the wheel. And while there's a lot to like here — this is the most powerful and track-capable Lexus since the LFA supercar was launched in 2011 — it's quickly apparent that Lexus' engineers were held back from making the RC F Track Edition what they wanted to make.

The RC F Track Edition uses the same naturally aspirated 5.0-liter V8 (2UR-GSE) that powered the IS F sedan in 2008 and the standard RC F since 2015. It's the engine Lexus also uses in the LC 500 coupe and the GS F sedan. The company's strict warrantability standards mean this engine is limited to 500 hp, said Yuuichi Tsurumoto, the chief engineer on the RC F Track Edition and the man responsible for all Lexus F models. So supercharging the engine was out of the question. Increasing the V8's displacement to 5.5-liters or more was explored, but then the RC F Track Edition would have been subject to a gas guzzler tax, and that too was deemed unacceptable. The frustration in Tsurumoto's voice was clear. 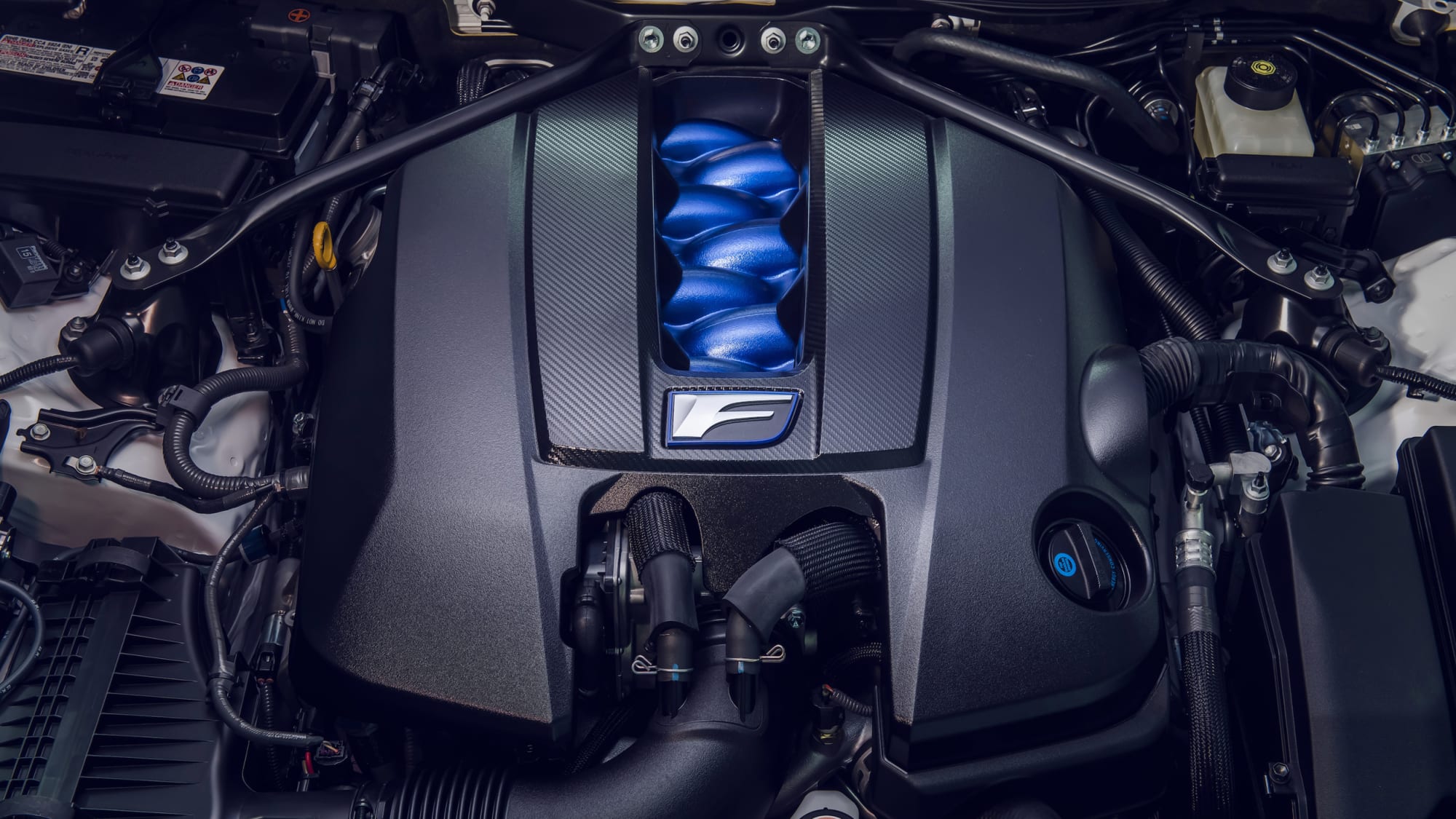 And while the 5.0-liter's output has been increased slightly for 2020, up to 472 horsepower (+5) at 7,100 rpm and 395 pound-feet of torque (+6) at 4,800 rpm, the RC F Track Edition doesn't get any more power than the standard RC F. Both versions of the coupe also continue to use an Aisin-supplied eight-speed automatic, which is essentially unchanged.

In the age of 797-hp Redeyes and 640-hp Cadillacs, the 472-hp RC F Track Edition may not sound like it would be quick, but it is. With its new launch control and shorter 3.13: 1 rear-end ratio, Lexus says it can sprint to 60 mph in 3.97 seconds. That's just a tenth or two off the performance of the LFA. Unfortunately, it's also only two tenths quicker than the standard RC F, which Lexus says now hits 60 mph in 4.2 seconds. 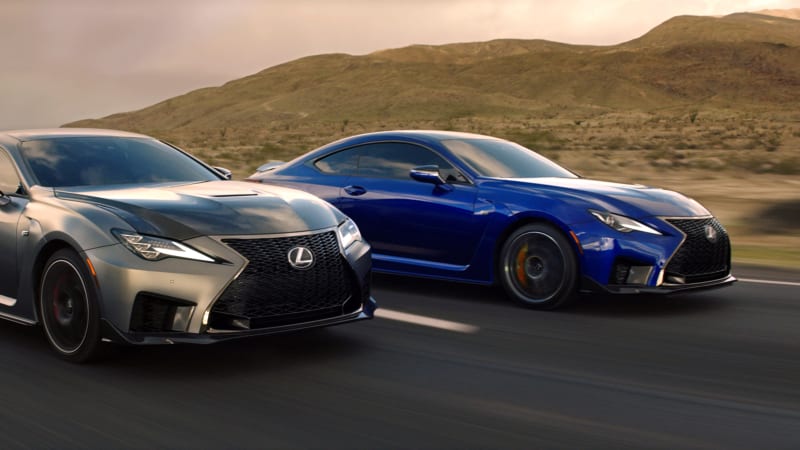 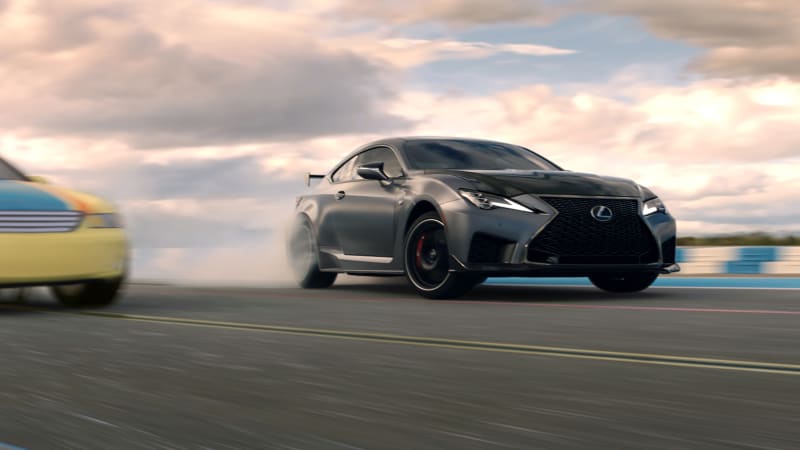 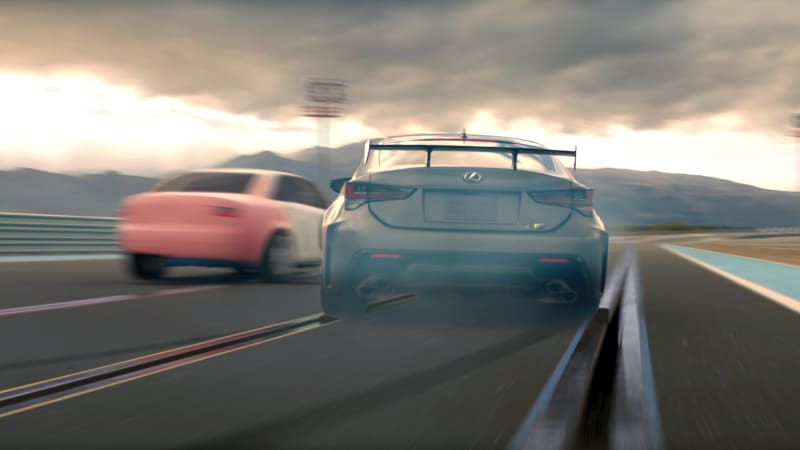 Launch control is available only in Sport+ mode. The system is activated with a button marked "Launch" on the coupe's console, and it allows you to rev the engine to just 1,800 rpm, which is lower than many similar systems out there. Tsurumoto says that's where the V8 makes 150 lb-ft of torque, which is all the rear tires can handle without going up in smoke.

Honestly, it's more fun to forget about the launch control, shut off the traction control and blaze the coupe's 19-inch Michelins through first and some of second gear. Although that will get very expensive very quickly. Lexus worked with Michelin for a special version of its Pilot Sport 4 S tire. They're sized 255/35R19 in front and 275/35R19 in the rear, and the standard RC F get them too.

Michelin's stickier Sport Cup 2 would certainly add grip, but those tires don't perform well in wet weather, and Tsurumoto was asked to build the ultimate daily driver than can be tracked on the weekends. He recommends buyers get a stickier set of rubber mounted on an extra set of wheels for track days.

Lexus uses very little aluminum in the RC F's chassis and structure, and as a result, it has long been criticized for being obese compared to its German competition. For 2020, the standard RC F drops about 55 pounds, and the Track Edition, which gets a carbon fiber roof and hood, drops another 122 pounds. On the track, it does feel lighter and more tossable, but don't get too excited: At 3,781 pounds, the Track Edition is still a porker.

The majority of the weight savings are from the Track Edition's Brembo carbon ceramic brake rotors. They shave 48.5 pounds from the car and work with six-piston Brembo calipers in the front. They also perform considerably better and with more consistency on the track than the steel units on the standard RC F. Pedal feel and modulation are excellent, and heat soak isn't a problem on the Thermal Club's 1.8-mile circuit, which is notoriously hard on brakes. 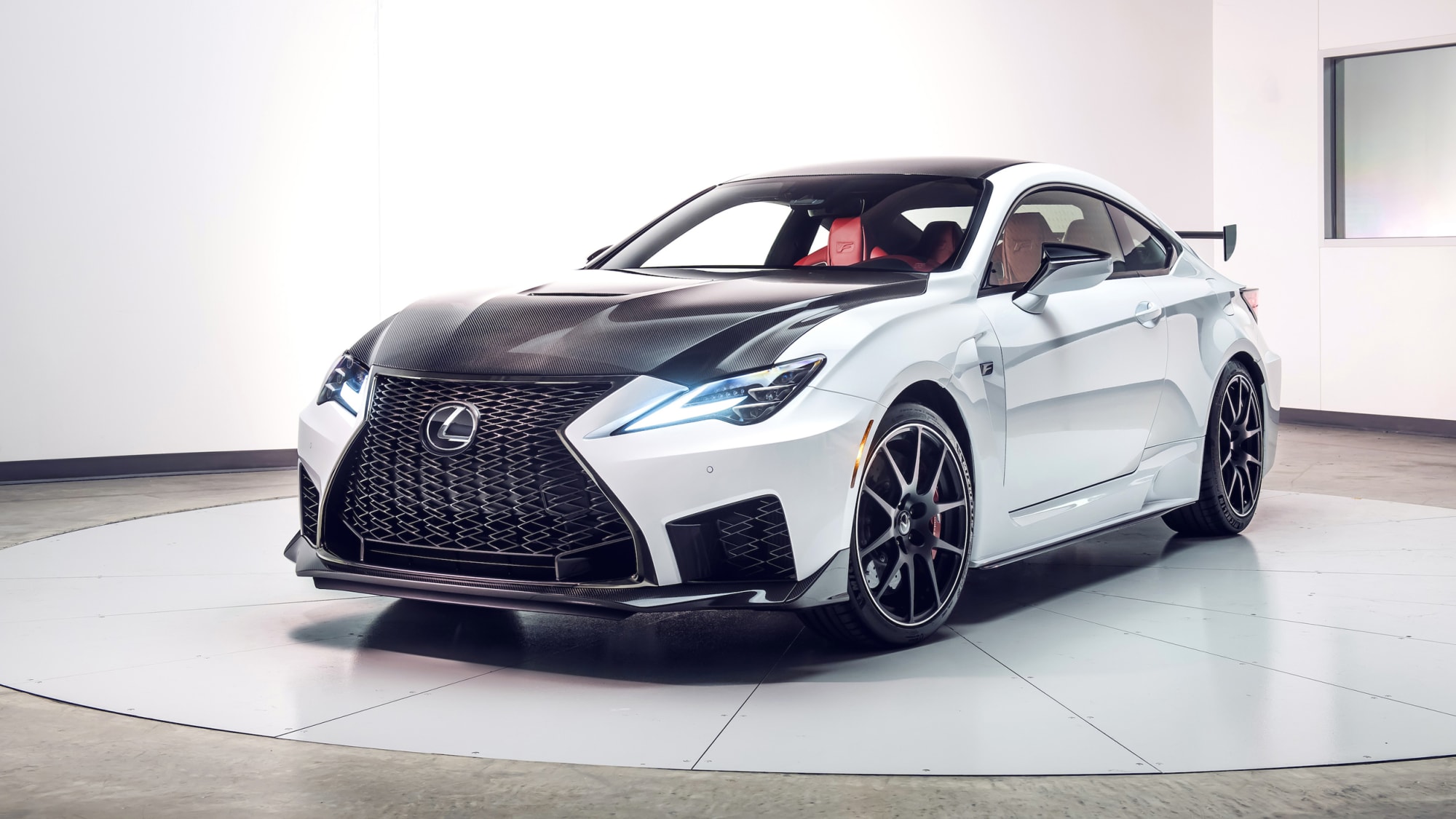 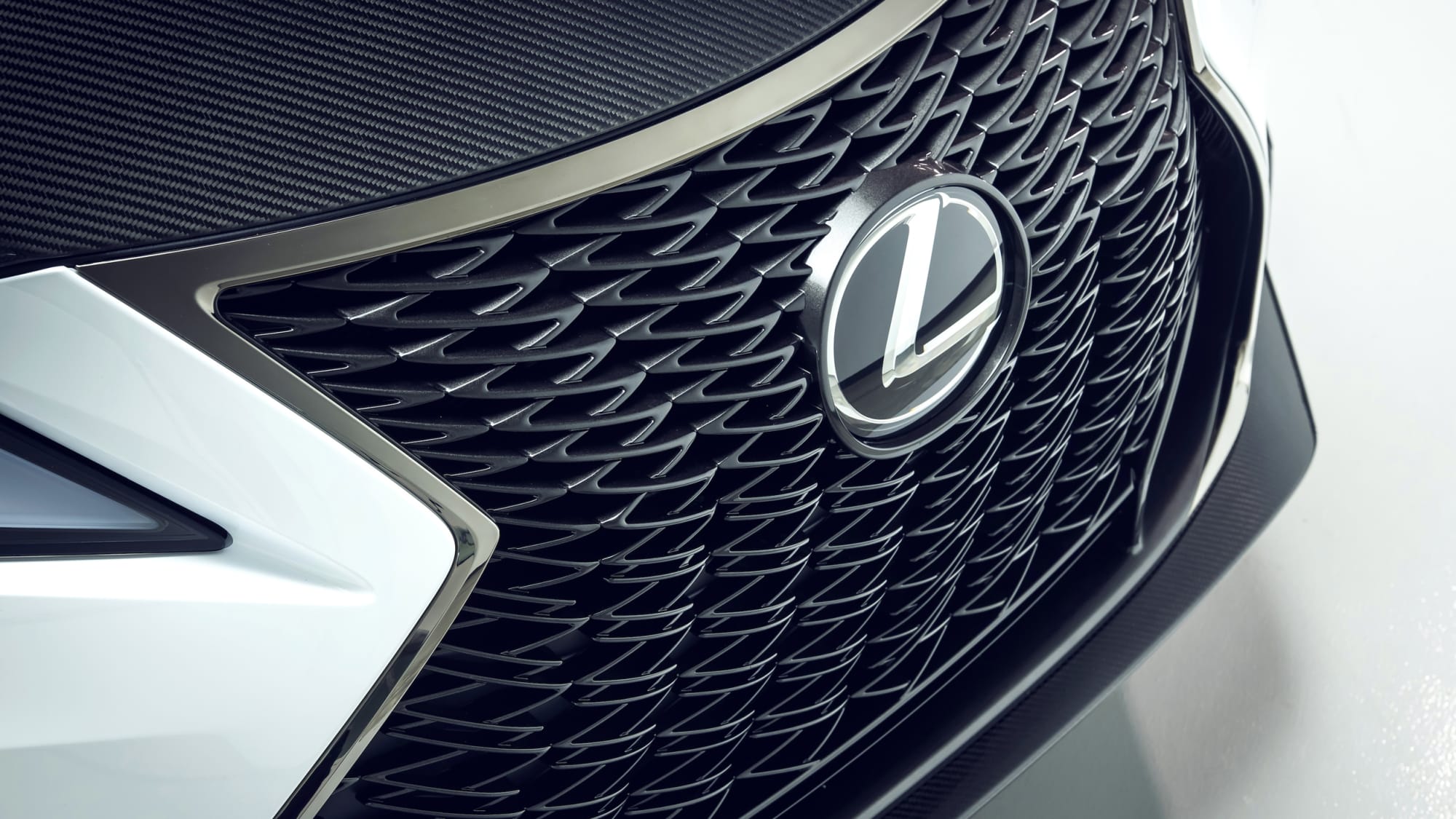 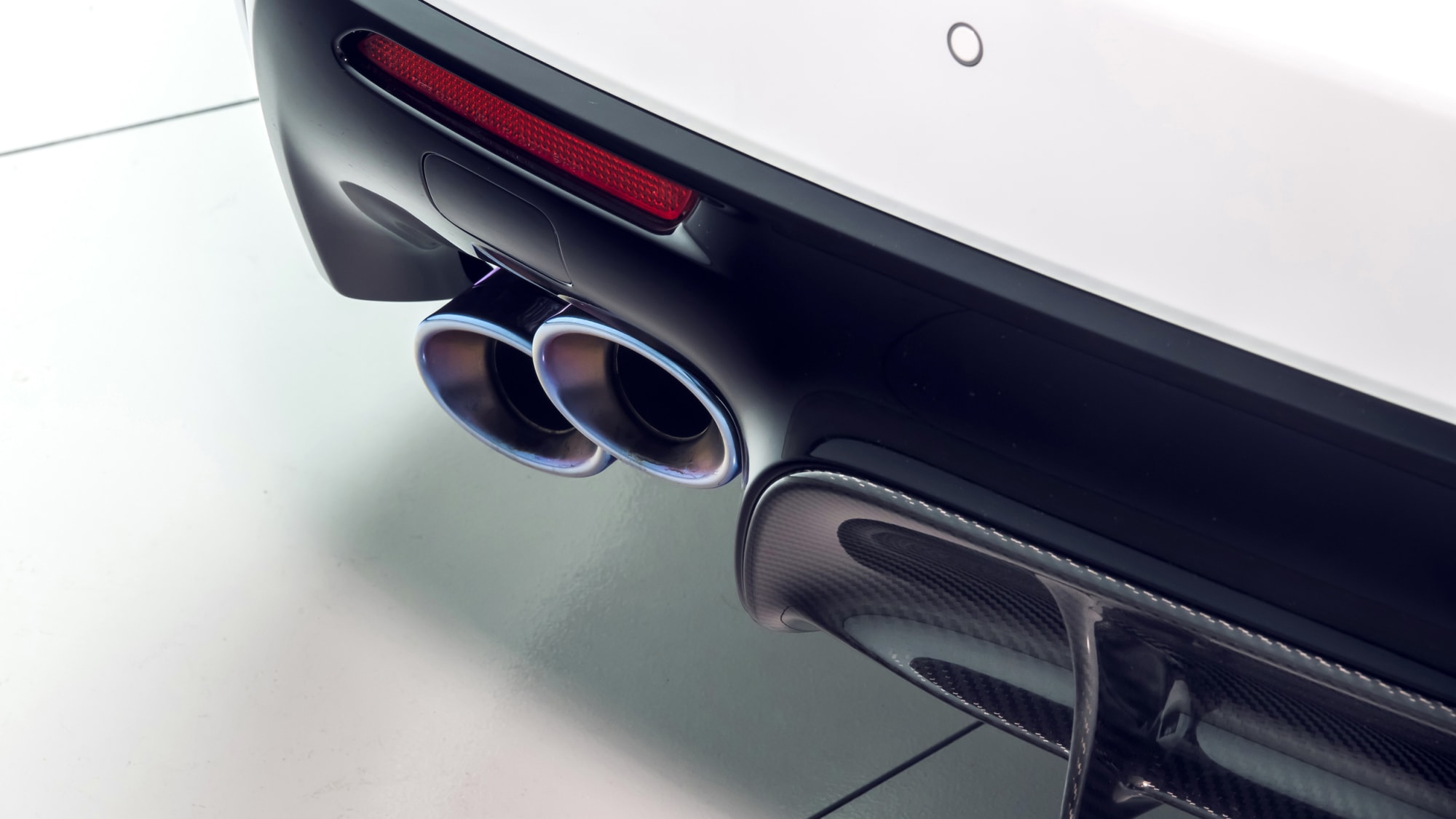 Other weight savings are less significant. The carbon fiber roof and hood save about 20 pounds. Replacing the RC F's retractable rear spoiler with a fixed carbon fiber rear wing increases downforce and saves 6.4 pounds. The Track Edition's forged BBS wheels are each 1.5 pounds lighter than the standard car's wheels. A lighter rear bumper saves 1.1 pounds, and hollow half-shafts save 4 pounds without sacrificing strength. Under the hood, the Track Edition uses a smaller air conditioning compressor, new aluminum spring support brackets, and shaves 1.5 pounds of excess aluminum from the underside of the intake manifold.

A further 15 pounds is saved by the Track Edition's titanium mufflers and connector pipes, from which the V8 thunders a very satisfying roar. The exhaust tips are stainless steel and coated in a blue finish for a unique look. In Sport+ mode, Lexus uses the audio system to manipulate and enhance that roar inside the cabin. Despite the weight reduction, the engineers swear the car's weight balance is exactly the same, with about 54 percent of the coupe's weight over its front tires.

When we ask Ysurumoto why he didn't improve that balance by moving the battery to the trunk, he laughs and says, "Very good question." Like seemingly many other elements in the RC F Track Edition, it seems his bosses wouldn't let him go far enough with that either.

It's also surprising how little the suspension has been changed on the Track Edition. The RC F's springs and sway bars were carried over untouched. The dampers were stiffened, some in the Normal setting, more in Sport+, but it isn't a radical increase in either compression or rebound. That said, on the track, the Lexus does feel tied down and secure. Mid-corner bumps and curbing don't upset its chassis. It's easy to pick your line and hold it. Although we didn't drive the car on the street, it feels like it would be a comfortable daily for an enthusiast driver. 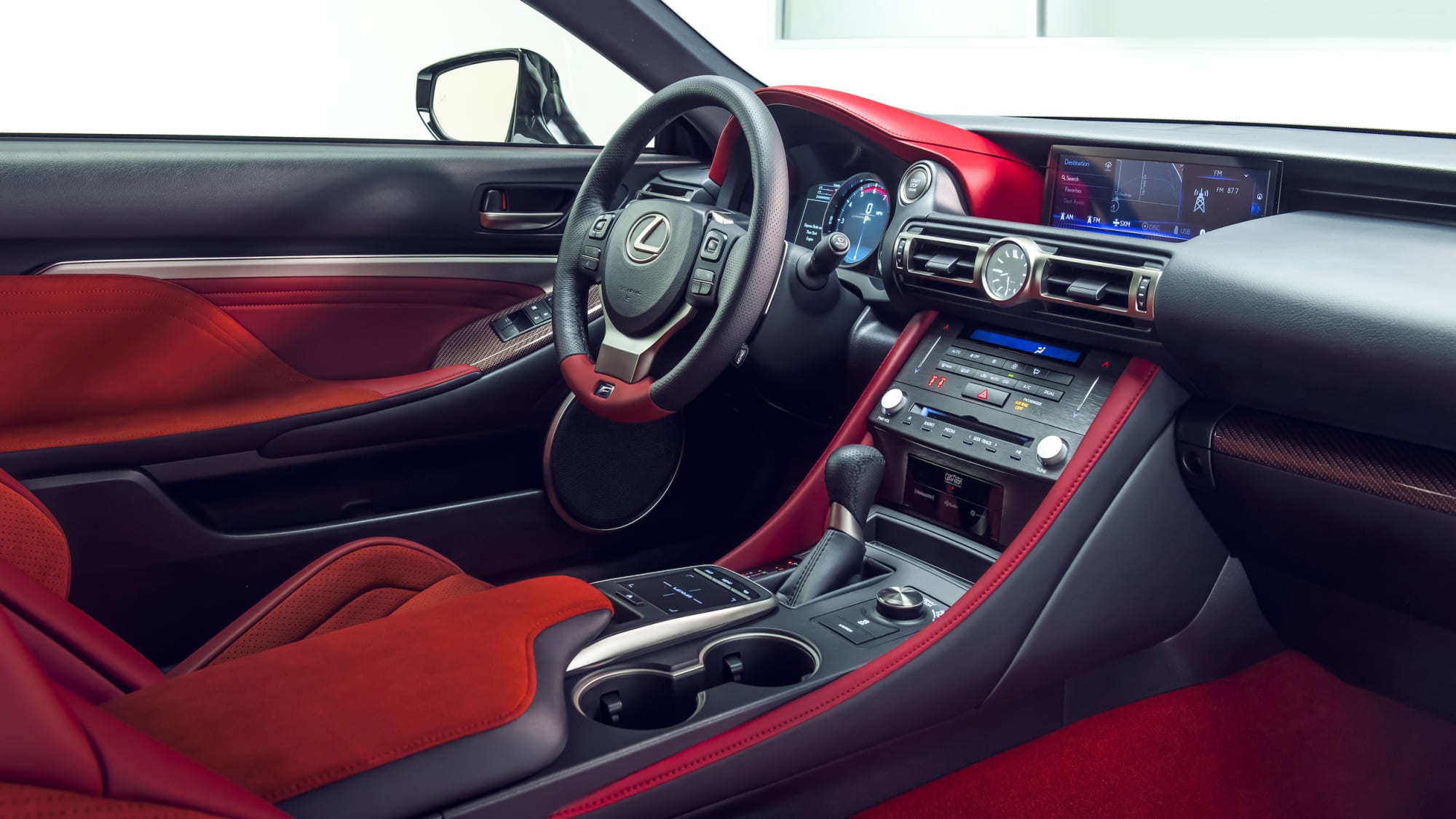 Some other small changes were made to increase response and reduce understeer. The steering rack is mounted with 150-percent stiffer bushings that resist deflection in hard cornering, which can affect the toe of the front tires. Stiffer rear subframe bushings reduce camber angle changes of the rear wheels. The rear engine mount bushing is also stiffer.

Throttle response is sharper than before thanks to a redesigned airbox with increased flow and a smaller but less restrictive air filter. A flap in the system, which increases volume and sound, now opens at 2,800 rpm. That's 800 rpm sooner than before, although we're not sure this is relevant as many RC F owners modify the flap to stay open all of the time.

More important, the engineers have also remapped the throttle response curve to be more linear throughout the pedal stroke. It's less abrupt than before, which gives you improved predictability and more precise control.

"Controlling the vehicle with the throttle was the goal," says Tsurumoto. "We wanted to make it easier to use the throttle to control the car. It's the style of driving I prefer."

These changes have reduced understeer. The front end still pushes if you overcook a corner entry, but it's mild and should prove to be a welcome safety net on a tight mountain road. Once the front end bites and you get back to the throttle, the Track Edition can be steered with its throttle. And very precisely, thanks to a more aggressively tuned Torsen differential. Big drifts come easily. Shut off its stability control, and there's enough power to carry long, smoky, full-lock powerslides.

Overall the new RC F Track Edition is an impressive high-performance car. It's easy to drive quickly, it can handle a beating at the racetrack, and it'll make any driver smile. It's just not radical enough. It's just not the car it can be, or should be. It isn't different enough from the standard RC F to justify its Track Edition name or its considerable additional cost.

If corporate would just loosen the reigns, Tsurumoto and his team of engineers could have built something truly exclusive, something truly special. A real ultra-performance limited-edition RC F model for a select few hardcore enthusiasts, one with a special powertrain, extreme tires and even more aggressive weight savings. Instead, the RC F Track Edition comes off as a glorified $32,000 Sport Package.

It's unfortunate. Lexus can do better. 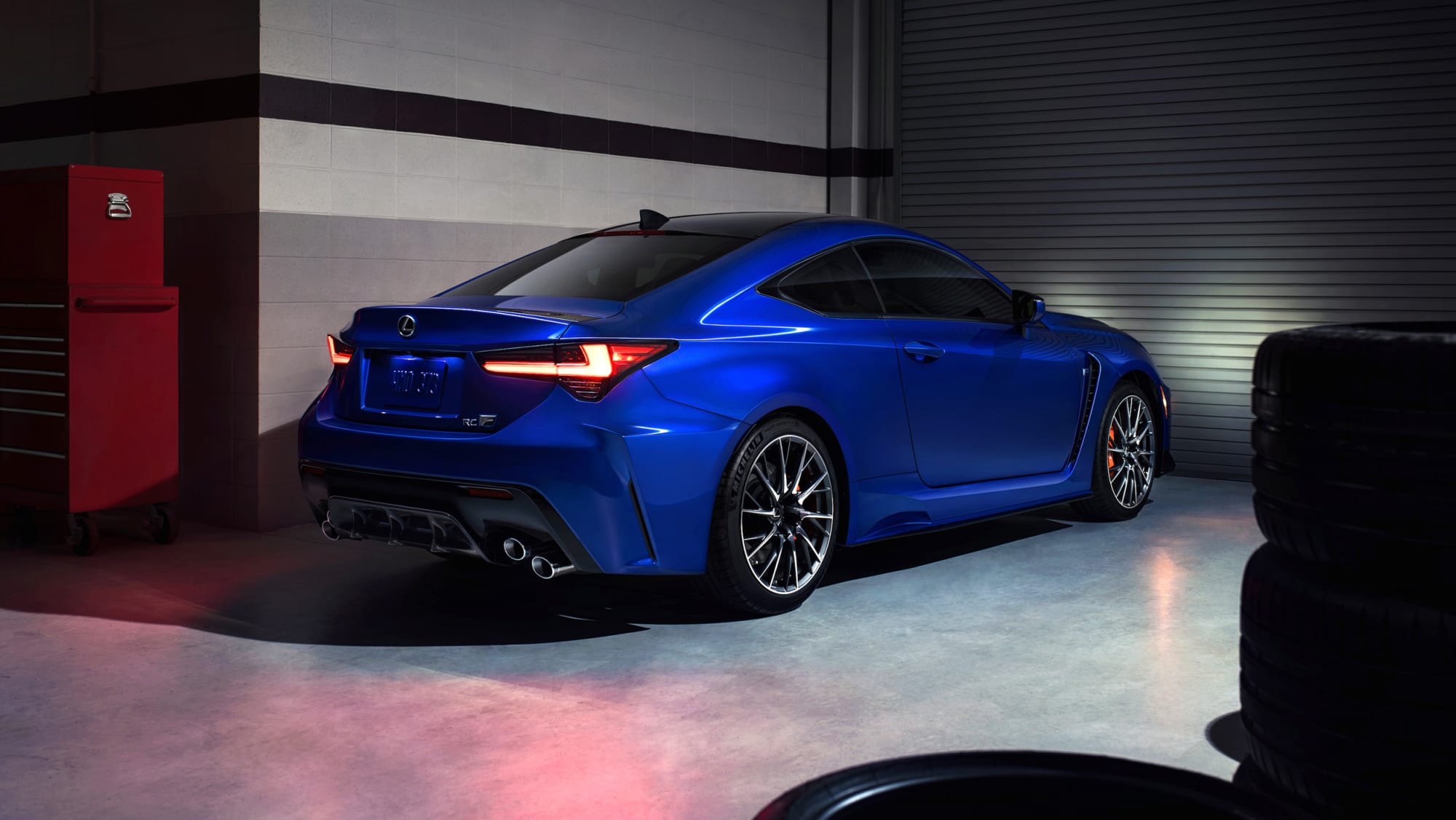