Lotus has a new sports car in the pipeline

The 2020 model will be cushier than usual Lotus products

Antti Kautonen
Lotus is bringing a new, yet-unnamed model to the market next year, as Autocar reports. The new sports car is likely to be based on a significantly updated Evora platform, and it will function as a link between the current lineup and a new portfolio, which can incorporate even sport utility vehicles and electrified products as well as a completely new sports car platform.

To appeal to less-than-hardcore Lotus buyers, the new model will offer improved practicality and livability, with better ergonomics and comfort than current Lotus models. It will be a challenge to achieve this without compromising on weight; the earlier attempted Lotus re-invention in the early 2010s was based on five simultaneously unveiled concept cars that weren't as lightweight as desired, nor based on a solid foundation. Ultimately, the concepts led nowhere, and the then-CEO was terminated.

When the time comes to update the Elise, Exige and Evora in the next decade, they will be based on a new architecture under development that will meet U.S. regulations from the get-go. The recently appointed CEO, Phil Popham, told Autocar: "The focus for now is on replacing the products we've got today — the sports cars," said Popham. "In a long time, Lotus has not had sight of what is required. You need a longterm plan, a product plan and a business plan locked down with investment. We have that plan locked in."

Lotus' tie-in with new owner Geely can result in funding in the billions, with Geely assisting with engineering and manufacturing. Crucial Lotus input such as design and product planning will continue in Hethel, UK, but with Geely helping out elsewhere, in Coventry, Sweden, Germany and China. Currently, Lotus continues to use Toyota engine technology, but there is a possibility that future Lotus models will use Geely-related powertrain parts. 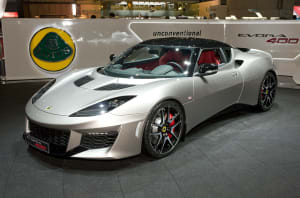